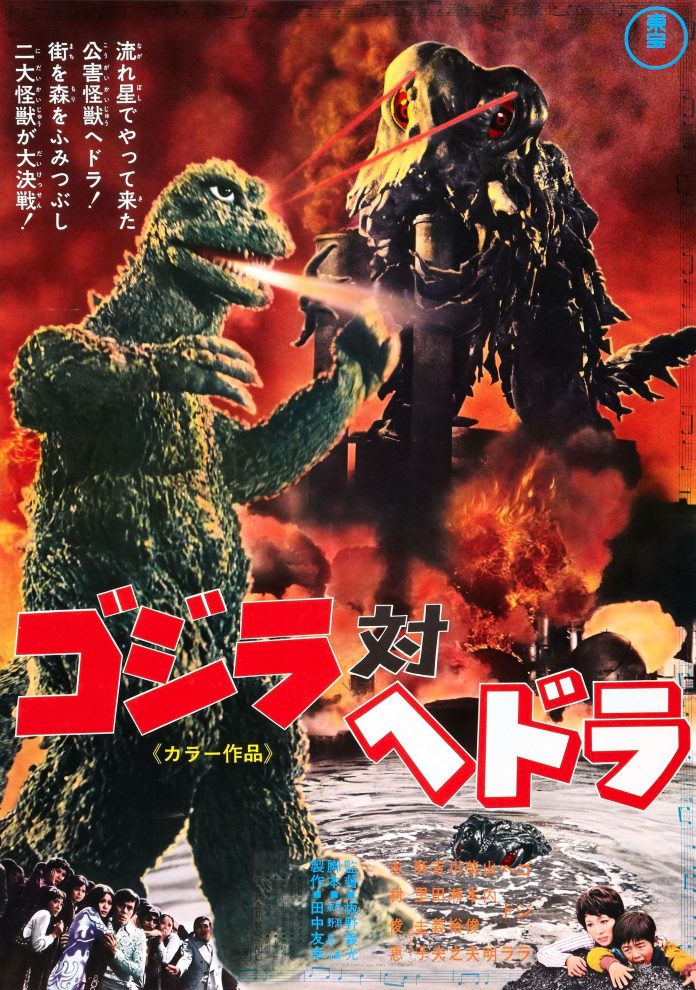 Sneered at by critics and dividing fans for decades, Yoshimitsu Banno’s entry in the Godzilla series is a bold vision of environmental damage. Both fantastical and horrific, Godzilla vs. Hedorah is a dark look at pollution that deserves a renewed consideration.

Briefly touched upon in 1969’s All Monsters Attack a.k.a. Godzilla’s Revenge is the issue of pollution. In the early 1970s, Japan’s pollution crisis was becoming critical. As Hedorah’s special effects director Teruyoshi Nakano explained, “pollution is a different kind of murder…if we do nothing about it, the human race may be destroyed. So I figured, if we were making a statement about pollution in the movie, bold expression would be necessary.” Bold is certainly an apt description for this film. With impressive visuals, poignant cultural comments, and an arresting musical score by Riichiro Manabe, Godzilla vs. Hedorah stands as one of the most unique entries in the Godzilla series.

The story follows the appearance of several gigantic creatures that have caused untold damage to numerous oil tankers at sea. Scientist Dr. Toru Yano (Akira Yamauchi), and his son Ken (Hiroyuki Kawase), soon learn the dreadful origins of the creatures – mineral-based monsters that have fed on smog and pollution, joining together to reach titanic proportions and spreading toxic sulfuric mist in their wake. The now-giant Hedorah (as named by Ken) makes landfall, and Godzilla appears to face off the smog monster. Initially defeated, Hedorah returns, even larger, to kill thousands across Japan. Godzilla faces Hedorah one last time at Mount Fuji, whilst Dr. Yano and Ken desperately try to set in motion their plan to kill Hedorah.

The contemporary importance of the film’s anti-pollution message finds itself evermore relevant in the 21st century. As of 2017, the issue of climate change is still of titanic significance, and still sadly evades direct response. To this end, Godzilla vs. Hedorah is one of the most culturally-important Godzilla films, sharing that honour with, among others, the original 1954 masterpiece.

Indeed, as outlandish as the film can be, the narrative of Hedorah arguably shares a closer tone and depth to Ishiro Honda’s original than most films in the series – it is certainly the closest to the original in the Showa era (1954-1975). In a reflection of the original, mankind cannot stop Hedorah through conventional means and must rely on something greater than itself. With Honda’s Godzilla, it is Dr. Serizawa’s dreaded oxygen destroyer. In Hedorah, it is Godzilla himself. This need to turn to something almost unthinkable is significant. In the original, the oxygen destroyer is required because Godzilla (a result of mankind’s reckless use of nuclear weapons) is indestructible, not bound to our understanding of conventional weaponry. Serizawa’s oxygen destroyer is needed to – in its own horrific nature – right a wrong by mankind. Similarly in Hedorah, Godzilla is needed because our mistreatment of the planet has wrought this toxic menace. Hedorah, like the first Godzilla, is not bound to our understanding. Godzilla, a force above our control, stands in to destroy it. This is best illustrated in the climax, when Godzilla holds Hedorah before the giant electrodes ready to destroy the smog monster. The military consistently cannot muster enough voltage for it to work, and with another failure, Godzilla turns to them and shakes his head before blasting the electrodes with his own atomic breath. Godzilla is clearly unhappy with mankind’s efforts. In an instance of anthropomorphic fun, Godzilla’s symbol as something above us is cemented.

The difference between the films however, is that Godzilla vs. Hedorah holds a more optimistic outlook compared with the bleak ending of Godzilla. The young Ken holds a connection with Godzilla, looking up to him with admiration and a confidence that he can save the earth. This connection lends an air of benevolence to Godzilla’s actions. It imbues Godzilla’s stoic heroism with optimism – that the young can hopefully overcome the wrongs of our elders. Moreover, the marching band fanfare that accompanies the final sequence suggests that, at least for now, the evil is vanquished.

Whilst Ken is emblematic of a hopeful attitude of what children can achieve, the teenagers in the film – clad in all the earmarks of late-’60s hippy culture – are downright nihilistic. At a party thrown at the base of Mount Fuji to symbolise the movement of young people against Hedorah, Yukio Keuchi (Toshio Shiba) declares that, “green pastures exist only in our hearts now”, before the teenagers all begin to dance to their psychedelic music. It reads as a grim acceptance that pollution has succeeded in killing the environment. Their party may seem fun, but it only starts when they realise there is nothing they can do. Despite the optimism of Ken, the attitude exemplified in the film’s teenagers is rather tragic and heartbreaking – speaking to the darker aspects of the narrative.

Even sadder is when Hedorah appears at Mount Fuji. Despite their earlier realisation that they’re powerless, the teenagers still all grab their torches and attack Hedorah in a final act of bravery. Hedorah fires back with its toxic sludge, instantly killing dozens of them. The youth are literally wiped out by pollution; a stark message if there ever was one. It reminds one of Nakano’s haunting comment that pollution is, “a different kind of murder.”

Perhaps this jarring contrast in the attitudes between Ken and the teenagers makes for an unsatisfying ambivalence. On the contrary, it cynically speaks to the changing attitudes we adopt as we grow older. Even then, the nihilism of the teenagers does not mitigate the optimism and hope of Ken. With Godzilla ultimately victorious, and with Ken’s connection to the heroic leviathan, an air of hope is retained as the film reaches its end.

Godzilla himself has a strong characterisation. Played once again by veteran suit performer Haruo Nakajima, the image of the hero Godzilla may seem silly to some, but provides an excellent degree of balance. Hedorah is so vile a creature that the stoic visage of this Godzilla works incredibly well to counter it. Unlike monsters beforehand like King Ghidorah or Rodan, whose destruction is witnessed but often without personal impact, the audience viscerally sees the deaths caused by Hedorah. It makes for a chilling experience seeing charred skeletons covered in sludge and burned by sulfuric acid. Godzilla being as heroic as he is furthers the audience’s desire to see Hedorah vanquished. Nakajima’s performance is superb.

Equally as superb is the film’s camera work. With a diminished budget, director Yoshimitsu Banno took the bold step of collapsing the drama and effects units into one team with a single director of photography. Yôichi Manoda’s camera work is striking and powerful. Hedorah is shot from several low angles, amplifying how horrifying and imposing the creature is. The grey colour tones that accompany Hedorah’s first appearance on land establish the bleak world that Hedorah inhabits, and shots of Hedorah feeding on the smoke billowing from factory towers are as awesome as they are horrific. One of the most striking shots in the film is a tracking shot that follows Ken as he runs through a decimated playground. In the foreground is a climbing frame, rusted and warped by Hedorah’s sulfuric mist. The framing traps Ken behind the rusted remains of a childhood relic. Ken runs from a childhood that pollution is destroying around him. This gorgeous and arresting imagery lends the film a stunning visual power.

A point of contention for many has been the inclusion of several animated, cartoon sequences peppered throughout the film. These sequences may appear too childish for some – and indeed they put across the film’s messages without subtlety – but they are incredibly striking. The lurid colours, combined with Riichiro Manabe’s surreal musical score, make the animated sequences oddly disturbing. One sequence wherein nuclear reactions are explained is particularly unnerving. While the cartoon atoms wear big smiling faces, Manabe’s score is uncertain and lingers. It is an uncomfortable sequence. One’s extra-textual knowledge of atomic decimation, which can be wrought by even a relatively small atomic weapon, makes the smile on the cartoon atom’s face evermore haunting.

Review: Godzilla vs. Hedorah (1971)Sneered at by critics and dividing fans for decades, Yoshimitsu Banno’s entry in the Godzilla series is a bold vision of environmental damage. Both fantastical and horrific, Godzilla vs. Hedorah is a dark look at pollution that deserves a renewed consideration. Briefly touched upon in 1969’s...