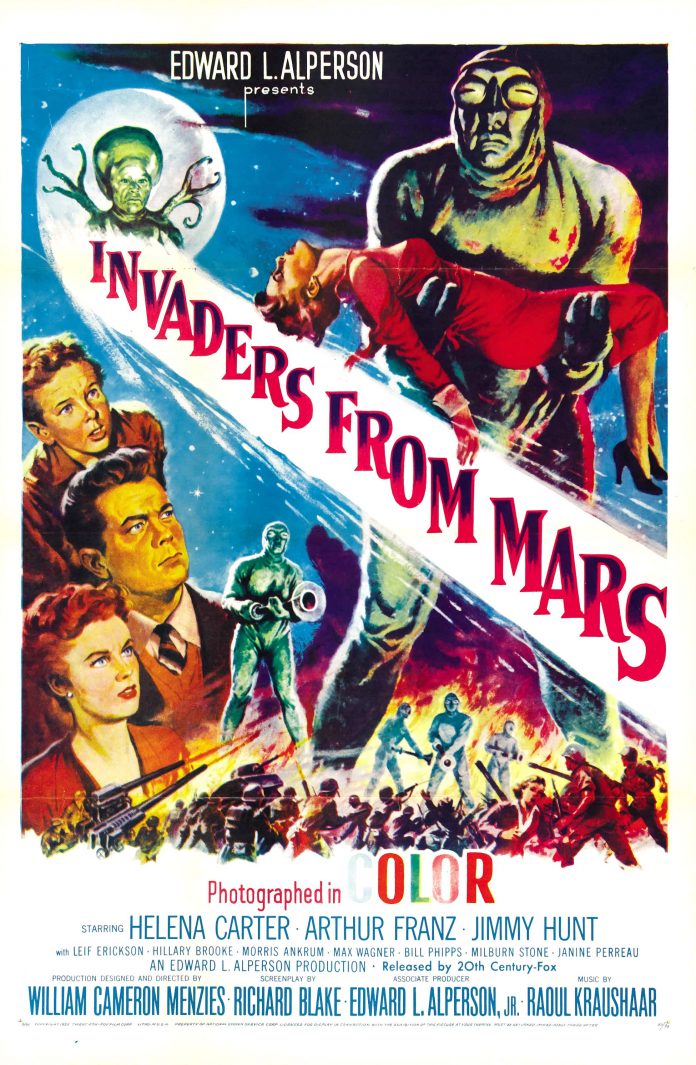 A nightmarish vision of the Martian menace, Invaders from Mars is a sharp look at how a child’s world changes from abuse.

William Cameron Menzies’ frightening portrayal of the Martian menace is blessed with his own fantastic production design, brilliantly weaving the world from a child’s perspective. With a stunning score and unique sound design to complement it, this is a film that deserves recognition. Fading into obscurity, it is time that Invaders from Mars was given a new consideration.

One night, young boy David McLean (Jimmy Hunt) awakens in the midst of a storm. Peering out of his window, he spots a glowing flying saucer descending into the hills behind his home. Fearing the worst, David tells his father, George (Leif Erickson), who goes out to look in the morning. When his father returns, something’s changed. More adults in David’s town fall prey to the unseen force in the sandpit behind his home. Totally isolated from his changed parents, David turns to doctors Stuart Kelston (Arthur Franz) and Pat Blake (Helena Carter). The trio do all they can – enlisting the help of the military – to face off the Martians before more people fall under their dreaded control.

Invaders from Mars has a simple setup, but is executed with such precision and strong performances that it goes above and beyond the expected alien invader scenario. David’s loving father-son relationship is firmly established in the film’s opening with some playfully gentle dialogue. One shot wherein David and his father look up into the heavens, framed together in a close-up, brilliantly passes their sense of excitement onto the viewer. Leif Erickson’s performance feels genuine and warm. We believe he cares about his son. In only a few minutes, a loving paternal trust is captured perfectly.

No trace of that love remains once David’s father returns from the sandpit. When David’s father physically hits him, it’s shocking and frightening. A cold moment. The camera lingers on David’s face, bewildered at this man he thought was his father. It defines the stark juxtaposition between who his father was, and the shell he has become. Erickson’s performance as a puppet of the Martians contrasts brilliantly with his initially warm and friendly demeanour. Once changed, his father speaks at his son, not to him, denying David any form of eye contact.

The camera work is superb. Low angles emulate David’s point of view, as well as his sense of dread and unease. Adults appear as giants to him, such as when he peers up at the police. By extension, the Martian mutants themselves appear monstrously gigantic.

The visuals are aided by director Menzies’ own stunning production design. From the Martian flying saucer to the eerie police headquarters, the vivid design lends a dream-like quality, chiming nicely with film’s opening. The spaceship’s interiors are bathed in a mesmerising green glow, and its sparseness adds an alien, unfamiliar touch. The police headquarters are equally sparse, with extremely high ceilings which disorient and confuse.

Of particular note design-wise is the sandpit that lies behind David’s home, with its crooked fence that seemingly leads to nowhere. It appears as something from the pages of a child’s story book. Seeing person after person walk toward that unsettling horizon adds to the nightmare that is the Martian invasion.

Complementing the visuals is the astounding sound design. A choir is used to produce the menacing yet ethereal sound that accompanies the opening and closing of the sandpit as the Martians capture people. It is an unforgettable noise, perfectly capturing the essence of the unknown and otherworldly. Behind the mesmerising sound design is Raoul Kraushaar’s beautiful musical score. The final notes that accompany the film’s end gently descend as the haunting choir lingers, just as Menzies’ film itself does in one’s mind.

The 1953 Invaders from Mars is often forgotten compared to its famous remake from 1986. It is a shame, too, because the original offers so much in its visual design, music, and sound. This is also film that achieves what few can: it successfully captures the perspective of a child. Perhaps ironically, that realistic depiction of a youthful eye is realised in fantasy, in monstrous green men from Mars.

Review: Invaders from Mars (1953)This is a film that achieves what few can: it successfully captures the perspective of a child. Perhaps ironically, that realistic depiction of a youthful eye is realised in fantasy, in monstrous green men from Mars.