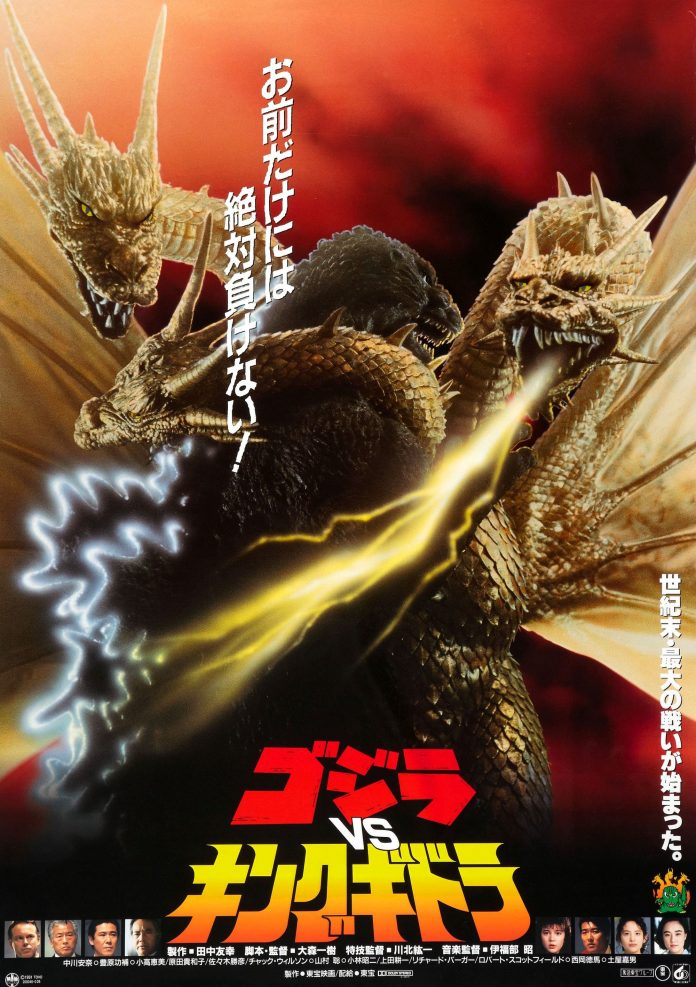 Anti-capitalist? Nationalist? Neither? Both? At times a little too politically ambivalent, the 18th entry in Toho’s Godzilla series features a complex time-travelling adventure, spectacular special effects sequences, and the return of one of Godzilla’s most famous adversaries, King Ghidorah.

Writer Terasawa (Kosuke Toyohara) believes he has found the origin of Godzilla: Japanese soldiers stationed on Lagos Island in 1944 say they witnessed a dinosaur protect them. One of the soldiers, Yosuaki Shindo (Yoshio Tsuchiya) claims the dinosaur saved his platoon by wiping out the US forces who had cornered them. Terasawa and Professor Mazaki (Katsuhiko Sasaki) believe that this dinosaur was mutated by hydrogen bomb tests in 1954, and that it became the first Godzilla. Simultaneously, time travellers from the 23rd century arrive in Tokyo. They explain that in the 21st century, Godzilla appears again to turn Japan into a radioactive wasteland. To prevent such a bleak future, time-travellers Wilson (Chuck Wilson), Glenchiko (Richard Berger), and Japanese national Emmy (Anna Nakagawa) plan to physically move Terasawa’s dinosaur to a new location, preventing it from ever becoming Godzilla. Their mission is seemingly successful, as Godzilla ceases to exist, allowing the time-travellers to reveal their real motives. They come from a future where Japan has become so economically powerful that it has begun to buy up whole continents, superseding China, the US, and the USSR as the world power. Wilson, Glenchiko, and Emmy were sent back to plant their own beast, King Ghidorah, in place of Godzilla on Lagos Island, to ravage Japan in the present to prevent the nation’s future economic grip on the world. Unbeknownst to the time-travellers, Godzilla’s creation was seemingly inevitable as the beast rises again to fight off Ghidorah…

Godzilla vs King Ghidorah is a film that, whilst highly entertaining, trips over itself in its handling of its time travel material. It also struggles to maintain consistency in its approach to unfettered capitalism, as well as its political attitudes towards characters like Shindo who have clear links to Japan’s imperial past.

Time travel is fictional, and so there is an argument to be made that any comment on its legitimacy or realism in fiction is redundant. On the other hand, the use of time travel in Godzilla vs King Ghidorah is arguably a non-sequitur, and so the discussion becomes somewhat necessary. The primary point of contention is that once our protagonists return to present day Japan, everyone is still aware of Godzilla despite it having been erased from history. Glenchiko offers a throw-away line in explanation, commenting that Godzilla’s creation was ‘inevitable’ given the 20th century’s proliferation of nuclear material. Indeed, Terasawa also discovers that a Russian nuclear submarine sank in the Bering Strait in the 1970s, likely the cause of Godzilla’s reappearance (or, is it his first appearance?).

The issue is that Glenchiko’s remark and Terasawa’s findings aren’t given the emphasis they need. With Godzilla’s removal from history forming the crux of the story, giving his reappearance such throw-away explanations is unsatisfying. Had significant focus been placed on either of these explanations (which do make sense), the parameters of the film’s time-travel would be easier to grasp. Moreover, making more of Glenchiko’s comments about nuclear proliferation and the inevitable nature of Godzilla would have allowed the film to make a more nuanced point about mankind’s reckless use of nuclear material. Instead, the film’s writing is left not with plot holes as some have claimed, but moments of missed opportunity and frustrating ambiguity.

However, the film’s biggest issues lie in its somewhat alarming political ambivalence. Yoshio Tsuchiya’s Shindo is as prominent in present day Japan as he was when he led the Japanese platoon in 1944 on Lagos Island. In the present, Shindo is the head of a massive corporation, one that helped craft Japan’s post-war economic recovery. His is a company so powerful that it owns its own nuclear submarines. Shindo is not shown to be a good character. Far from it, he is clearly driven by capital, and repeatedly remarks on all he has built. The issue lies in the depiction of Japan’s military during World War II. Although a veteran says to Terasawa that the dinosaur on Lagos Island was likely just defending its home when it attacked the US troops, it is difficult to ignore that Shindo’s soldiers escape totally unharmed – the dinosaur never once attacking the Japanese forces. Having US forces almost triumphantly wiped out, and having Shindo specifically identify the dinosaur as their saviour is uncomfortable to say the least. Even Ishiro Honda, director of the original Godzilla, thought that such sequences went “too far“.

On the other hand, Godzilla vs King Ghidorah is arguably not a total nationalist fantasy, either. As mentioned above, Shindo is not portrayed as a ‘good’ character, with Yoshio Tsuchiya turning in an intriguing portrayal of a man sure of himself and all he has built. More telling, however, is the interaction that he and Godzilla share when Godzilla returns to destroy Tokyo. In decimating the city, Godzilla becomes the destroyer of all that Shindo has created, shattering the vain hallmarks of capitalism. Shindo looks up at the mighty leviathan as it peers in at him through a window. The pair share an intimate moment as Shindo remembers how the dinosaur saved his life. As Akira Ifukube’s masterful music draws to a close, Godzilla roars mightily before incinerating Shindo with his atomic breath. The skyscraper explodes. Shindo is obliterated.

Arguably, one reading of this sequence is that Shindo has projected himself – and by extension his own morality – onto Godzilla ever since his experience on Lagos Island. For Godzilla to so violently kill Shindo could be a rejection of all that he stands for. Whereas the dinosaur in the 1944 was potentially reflective of Shindo’s wartime belief in the imperial system, the Godzilla of the 1990s is something else entirely.

The film’s thematic ambivalence also extends to the film’s difficult portrayal of capitalism. On one hand, the film posits an interesting, almost satiric concept that unfettered capitalism can only be stopped by giant monsters. More significantly though, Emmy having such prominence in the narrative is important. Although she rebels against her comrades, she never once recants her belief that the future Japan must be restrained. In telling Terasawa of Japan’s future, Anna Nakagawa endows her performance with a nuance that clearly attaches negative connotations to unrestrained capitalism. Furthermore, the climactic battle between Godzilla and Ghidorah causes untold damage to Japan’s financial district in Shinjuku. Godzilla quite literally smashes the banks. The plans of the time-travellers may have been thwarted, but Godzilla’s rampage in Shinjuku at least symbolically signifies a blow for capitalism, and Emmy’s performance does so more literally.

On the other hand, in having the goal of the antagonists be to dismantle the future economic power of Japan, does the film then assert a pro-capitalist agenda; one that argues that those who try to subvert financial gains are inherently malicious or untrustworthy? Then again, Emmy is the only one of the time-travellers who expresses significant concern over Japan’s future evils. Wilson and Glenchiko seem more preoccupied with eagerly using King Ghidorah than they are with fighting for a peaceful future. Therefore, perhaps the film’s possible anti-capitalist reading (precarious though it is) is not necessarily wholly smeared because of Wilson and Glenchiko if Emmy manages to retain her original agenda whilst asserting that the way in which her comrades have tried to realise it is wrong.

These readings likely go too far in trying to establish clear political alignments in the narrative, though it is difficult to ignore the complexities and wildly juxtaposing ideas that characterise Kazuki Ômori’s screenplay.

Ambivalence aside, Godzilla vs King Ghidorah boasts some astounding special effects sequences. King Ghidorah’s aerial attacks over Japan wreak untold havoc, and the miniature effects realise such devastation convincingly. King Ghidorah’s updated design for Godzilla’s ’90s era is an impressive sight. Much like his Showa era incarnations, King Ghidorah dominates the frame when onscreen. Godzilla fairs even better. Although the 1991 ‘GhidoGoji’ Godzilla design is essentially the 1989 ‘BioGoji’ suit (from Godzilla vs Biollante) with some slight modifications, Godzilla’s design here is striking and imposing.

The film suffers at times due to slow pacing, and unfortunately this partly comes down to the monsters themselves. As grand as they look, special effects director Koichi Kawakita rarely engages the monsters in close combat (it is almost non-existent during the monsters’ second battle). Indeed, a staple of the ’90s Godzilla era would be the films’ over-reliance on beam attacks for the monster battles – making for unexciting sequences overall. Whilst physical contact is used in this film, it is a fraction of the kind of combat seen in Godzilla films of the 1960s and ’70s. Additionally, although both King Ghidorah and Godzilla look as convincing as they do because of how heavy they appear to be, this factor does at times become an issue when the monsters’ few moments of close physical combat seem somewhat lethargic.

Ultimately, Godzilla vs King Ghidorah can be enjoyed as an exciting, intriguing, and fun science-fiction story, despite some shortcomings in writing and tone. The film may stumble in crafting a wholly satisfying time travel plot point, though the film is not entirely hurt by it either. On the contrary, the film’s central time travel plot device is one of the film’s greatest points of engagement. The monsters are a stunning sight to behold, and despite some slow pacing during their fight sequences, the film’s special effects are spectacular. From a political reading, the film is unsatisfying in its inability to clearly define its standpoint. This is not to argue that all films should strive to present definite political leanings, but given Shindo’s active role in Japan’s wartime history, such a take is uncomfortable to watch. This is a character who proudly leads a platoon under a fascist and nationalist regime, one aligned with Nazi Germany. Granted, Shindo is not written as a likeable or good character, and his death at the hands of Godzilla is arguably a violent rejection of his politics, but having none of the main protagonists outright take issue with his past or who he is as a person is uncomfortable and frustrating.

Godzilla vs King Ghidorah sadly suffers from its lack of cohesive elements, its indefinite presentations of politics and capitalism, and some rather slow pacing at times. However, stepping back, one can absolutely appreciate the film as an exciting time-travel adventure complete with impressive visuals and memorable moments. At the very least, the discussions and analysis that this film provokes are fascinating; and they alone warrant a renewed consideration.

Review: Godzilla vs King Ghidorah (1991)Godzilla vs King Ghidorah sadly suffers from its lack of cohesive elements, its indefinite presentations of politics and capitalism, and some rather slow pacing at times. However, stepping back, one can absolutely appreciate the film as an exciting time-travel adventure complete with impressive visuals and memorable moments. At the very least, the discussions and analysis that this film provokes are fascinating; and they alone warrant a renewed consideration.