A clear homage to the works of John Carpenter and Lucio Fulci, The Void is a frightening look at a world beyond our own, putting fantastic practical special effects at its forefront. The Void defies all expectations, immersing you into a nightmare – a stylish, beautiful nightmare.

Drug-fueled James (Evan Stern) narrowly escapes being murdered. Stumbling through the woods, he is picked up by police Deputy Daniel Carter (Aaron Poole), who drives him to the nearest hospital. There, we meet Dr. Powell (Kenneth Welsh), pregnant girl Maggie (Grace Munro), her grandfather, Ben (James Millington), and Daniel’s estranged wife, nurse Alison (Kathleen Munro). Daniel discovers one of the hospital’s nurses, Beverly (Stephanie Belding), murdering a patient. Shooting her dead before she can attack him, Daniel heads out to his car after state trooper Mitchell (Art Hindle) arrives to retrieve James. Outside, Daniel is confronted by a mass of robed cultists, a black triangle marking their garments. Wounded by them, Daniel retreats back to the hospital just as Vincent (Daniel Fathers) and Simon (Mik Byskov) – the men who tried to kill James – enter the building and hold the group at gunpoint. James grabs the pregnant Maggie as a hostage, and stabs Dr. Powell in the neck, killing him. Meanwhile, the dead Beverly has now morphed into a grotesque creature. Breaking out into the hallway, it devours state trooper Mitchell before Vincent and Simon destroy it. The worst is yet to come for this group of strangers. The cultists outside mass, Dr. Powell rises from death to capture nurse Alison, and Daniel, Vincent and Simon, and James are forced into the hospital’s basement to find answers. What little they find baffles and frightens, as Dr. Powell has uncovered a hideous evil. Powell has pursued a way to conquer life and death. In doing so, he leaves a plague of monstrous creations roaming the halls of the hospital’s depths. Daniel must confront Powell, but in doing so must face the dreadful netherworld beyond our own… 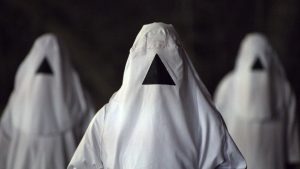 The Void wears its various tributes to classic horror on its sleeve, though much like Stranger Things, such tributes never feel forced, or strained. On the contrary, The Void seems to perfectly build on concepts and ideas that have come before. The film’s most significant narrative thread, of a mythic opening to another, darker place, is arguably similar to ideas explored in two films of Lucio Fulci’s unofficial ‘Gates of Hell’ trilogy – namely City of the Living Dead (1980), and The Beyond (1981). Both of those narratives explore individual acts of evil or self-destruction weaponised to open an entrance to that darker place. Dr. Powell’s pursuit of the titular void, and the power it holds over death, is The Void’s own act of weaponised evil. With City of the Living Dead, its opening is to hell. With The Void however, what lies on the other side of its portal is far beyond our grasp.

Indeed, the notion of hell is far more tangible an idea than that which The Void asserts. The film’s narrative dispenses few details as to where or what exactly the void is. To some, the lack of clarification may be somewhat disappointing, but it need not be. On the contrary, it arguably acts as one of the narrative’s strengths. Never once does the lack of clarity seem indicative of lazy writing. Indeed, what the narrative prohibits in terms of an explanation it makes up for with raw emotion and gruesome visuals. We do not need Daniel Carter or Dr. Powell to tell, at length, the parameters of this netherworld, for we have already seen a glimpse. Every moment of abject fear, every moment that some gruesome being slips from the shadows to envelop a character, every moment that a character slips further from sanity – THAT is the void. We are prohibited from understanding the void, but can understand dread – and that is as close as we, as mortals, are permitted. 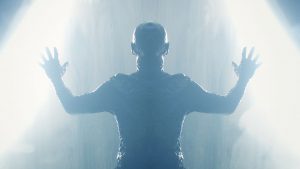 It is a shame that, with such complexity to its central concept, some of The Void’s characters are less engaging than others. We are treated to some details regarding Daniel’s estrangement from Alison, and that information truly makes their character breakdowns evermore tragic and unsettling. Aaron Poole’s performance as Daniel is wonderfully subtle. We may not see his fear explode as with Vincent or James, but his is no less prevalent. Some beautiful camera work frames Daniel so that in just a strained or fervent glance, we know just how frightened he is. On the other hand, Kathleen Munro isn’t as convincing as Alison. Perhaps this is because her character has fewer scenes, or perhaps it’s down to how generally straightforward Munro delivers her lines. For a character with such significance to Daniel, it is a shame that that importance comes across more so from Powell’s dialogue than from any embellishment on Munro’s behalf.

Complementing the story are some fantastic practical special effects. Animatronics, puppetry, and prosthetic makeup appliances are front and centre. The Void is a film that triumphantly shows how practical effects still deserve a place in cinema. In recent memory, films like Alien: Covenant (2017) or Star Wars: The Force Awakens (2015) have proudly declared their use of practical effects, only to obscure them in the background of shots or actively layer CGI over the top in the final film. The Void meanwhile confidently puts its practical effects to excellent use without the intrusion of digital augmentation. The monstrous being that emerges in the film’s final act (to not spoil narrative twists, its name and context cannot be mentioned) is hideous, but is also a striking testament to what practical effects can achieve. An incredible feat of ingenuity and craftsmanship, it amazes with just how it could have been pulled off. The many monsters of The Void bring to mind Rob Bottin’s spectacular work for John Carpenter’s The Thing (1982). Indeed, the spider leg appendages that erupt from Beverly’s mouth as she starts to transform take a fun – if disgusting – visual cue from Bottin’s remarkably disgusting makeup effects.

The Void also boasts stunning production design. Of particular note is the hospital morgue, the site of Powell’s portal into the void. Flooding the room with sharp, white light, the triangular portal entrance provides the film’s most memorable visuals. The morgue itself is built like a temple, an imposing monument to Powell’s desire to surmount morality. Darkness creeps where the portal’s light cannot reach, and the blue hues of the colour grade add a final chill.

Within the context of The Void’s production, the amount that directors Steven Kotanski and Jeremy Gillespie have achieved with a low budget and precarious producer investment (as explained in the behind the scenes feature of The Void’s DVD and Blu-Ray releases) is nothing short of remarkable. Admittedly, The Void does have some shortcomings with its characters, but it more than makes up for them with its incredible production design, visceral practical effects, and an overall feeling of dread that words cannot describe. In their careers, filmmakers like George A. Romero, Tobe Hooper, and John Carpenter all demonstrated the potential power of independent cinema to explore new and daring concepts. Suffice to say, it is thrilling and exciting to see directors like Kotanski and Gillespie continuing that tradition.

Review: The Void (2016)The Void defies all expectations, immersing you into a nightmare – a stylish, beautiful nightmare.