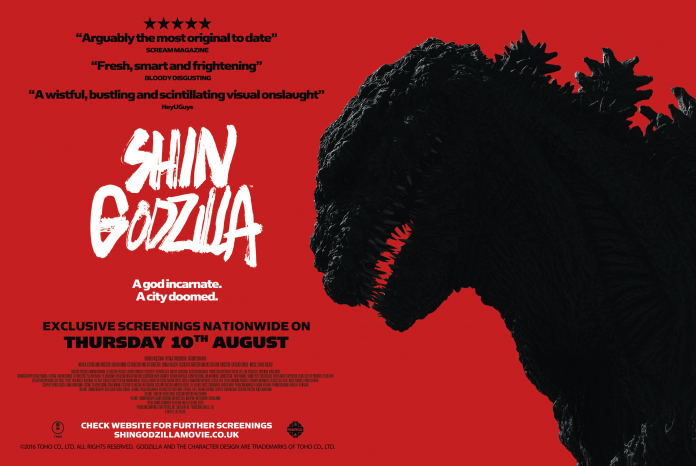 Over a year after its Japanese debut, Shin Godzilla has finally come to UK cinemas in a limited theatrical release courtesy of Manga UK. Superbly written and featuring some beautifully apocalyptic visuals, Hideaki Anno and Shinji Higuchi’s Shin Godzilla is arguably one of the most daring Godzilla films to date.

Following a series of mysterious attacks on Tokyo Bay’s Aqua Line, a gigantic creature emerges and shambles its way into the city. As the creature appears to evolve and transform, the Japanese government struggles to conduct an effective response. With the fatal inefficiency of his superiors, Rando Yaguchi (Hiroki Hasegawa) leads a team of political misfits to craft what others have failed: action to save the people of Japan. International interest in the creature – now called ‘Godzilla’ – has arisen, but so have tensions. As the world watches, nations consider a nuclear strike on Godzilla in the heart of Tokyo, whilst Yaguchi’s team races against time to find the key to stopping the seemingly indestructible menace.

Much like Ishiro Honda’s Godzilla (1954), Yoshimitsu Banno’s Godzilla vs. Hedorah (1971), and Koji Hashimoto’s The Return of Godzilla (1984), Hideaki Anno’s Shin Godzilla is one of the most politically-charged Godzilla films to date. With its sharp criticism of bureaucratic failings, Shin Godzilla is simultaneously ferociously bleak in its visuals yet ultimately optimistic in its protagonists.

Released in July of 2016, the key narrative thread of Shin Godzilla, that establishment politics ultimately fail the people they intend to serve, is (in hindsight) incredibly poignant. Certain real-life political narratives in 2016 had connotations of peoples turning away from perceived ideas of establishment politics. However, whereas the real-world consequences of such disenfranchisement were questionable at best, Shin Godzilla posits a narrative where the response to such disillusionment can be positive – even life-saving. Writer (and co-director) Hideaki Anno does not present the cabinet of Prime Minister Seiji Okochi (Ren Ôsugi) as evil or malicious (which could have undermined the film’s commentary) but rather as misguided and ill-informed, which in turn makes them believable and the events unfolding more tragic. These are politicians accustomed to a business-as-usual attitude; an attitude ill-suited to dealing with the appearance of Godzilla. The decisions made (or lack thereof) by this cabinet cost lives; not because they are inherently bad people, but because they cannot see beyond the political process to those hurt the most.

Though some of Rando Yaguchi’s younger cohort still seem interested in preserving their political futures, more significant is that most are more determined to see Godzilla dealt with and the people saved. Disenfranchisement can be deadly, but it doesn’t have to be, and Yaguchi’s team exemplify that optimistic outlook marvellously.

A common criticism is that the film takes time with lengthy boardroom meeting sequences – a reasonable comment, but one that fundamentally misses what directors Hideaki Anno and Shinji Higuchi have intended. You’re tired of this display of system-bound politics? So are the civilians dying because of it. Moreover, from a technical standpoint, these scenes allow for the cinematography to establish the difference visually between the old guard and Yaguchi’s cohort. The meeting scenes are characterised by static shots with the occasional pan or track. By contrast, those led by Yaguchi or his team are far more visually dynamic. Tighter editing and a varied range of framing exemplify these differences. This is a film wherein the visuals and the writing complement one another.

Comparable to the films of Ishiro Honda – namely The Mysterians (1957) and Battle in Outer Space (1959) – is the film’s subtle yet noticeable point regarding international co-operation. German scientists compassionately agree to help Yaguchi’s team process their data to find a key to defeating Godzilla. France steps in to aid Japan in one of the film’s tensest moments. Even the U.S., who are leading the planned strike, are not presented with eagerness to deploy their nuclear arsenal, but with a quiet sadness; aware of the weight of their actions. Indeed, several American scientists are seen aiding Yaguchi’s team. International co-operation is paramount in the fight against Godzilla, lending an interesting parallel with several of Ishiro Honda’s earliest science-fiction offerings.

Parting with tradition, Godzilla is no longer a practical man-in-suit creation. As impressive and powerful as that method has been throughout the series, CGI and motion-capture was opted for with Shin Godzilla. Some of the digital effects appear astounding. Godzilla’s fourth form is awe-inspiring as it comes ashore. In many cases, the digital animation constructed here is often much more convincing than its counterparts in Hollywood (the budgets of which are ten-fold of that which was afforded to Shin Godzilla). However, the CGI is not entirely without fault. In some instances, Godzilla looks all-too digital, and one’s suspension of disbelief (whilst not broken) is challenged. Practical effects are used throughout as well. The film’s striking use of miniatures is incredible. At first glance, many shots of buildings shattering beneath the onslaught of Godzilla appear so frighteningly real that one only realises they are miniature when viewing behind-the-scenes material.

Shiro Sagisu’s music wonderfully complements the film’s visuals. Whilst much of the score is comprised of Akira Ifukube’s soundtracks from previous Godzilla films (scores can be recognised from King Kong vs. Godzilla, Terror of Mechagodzilla, and the original Godzilla among others), Sagisu provides original pieces for some of the film’s most memorable sequences. Aside from its visual mastery, the sequence in which Godzilla first uses his infamous atomic breath (dubbed the ‘Who Will Know?’ sequence by fans) is accompanied by an elegant and haunting score. It lingers in the mind long after the film has finished.

Shin Godzilla is an exciting and daring entry for Toho’s Godzilla series. Striking in its poignant political commentary and bold in its visuals, Hideaki Anno and Shinji Higuchi have produced a film with a palpable affection for Godzilla’s cinematic legacy, as well as a drive to take that legacy into new territory. Shin Godzilla is an excellent film, one that is sure to offer new and unique readings upon each viewing.

Review: Shin Godzilla (2016)Shin Godzilla is an exciting and daring entry for Toho’s Godzilla series. Striking in its poignant political commentary and bold in its visuals, Hideaki Anno and Shinji Higuchi have produced a film with a palpable affection for Godzilla’s cinematic legacy, as well as a drive to take that legacy into new territory. Despite some clunky dialogue and sadly underdeveloped characters, Shin Godzilla is an excellent film, one that is sure to offer new and unique readings upon each viewing.