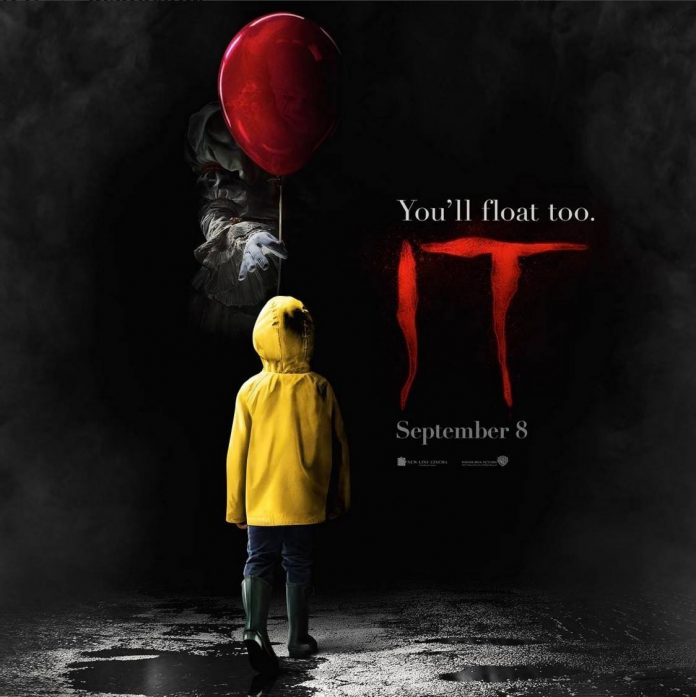 Andy Muschietti brings us the latest adaptation of Stephen King’s It. Wearing its cine-literate references on its sleeve, It brings to mind the Duffer Brothers’ Stranger Things – not least in the casting of Finn Wolfhard. Despite some unconvincing CGI and an occasional slow pace, It is a remarkable horror film in its compelling characters and nightmarish central performance by Bill Skarsgård as Pennywise the Dancing Clown.

In October 1988, Georgie Denbrough (Jackson Robert Scott) is playing in the rain when his paper boat floats into a storm drain. Desperate to reach it, Georgie looks into the drain. Looking back at him is Pennywise, the Dancing Clown (Bill Skarsgård).

Sadly, Georgie is not the first child in the town of Derry to go missing. His older brother, Bill (Jaeden Lieberher), and his friends, loudmouth Richie (Finn Wolfhard), hygiene-obsessed Eddie (Jack Dylan Grazer), and nervous Stanley (Wyatt Oleff) are all aware of the number of kids disappearing. As the group finds new friends in the abused Beverly (Sophia Lillis), the new kid in town Ben (Jeremy Ray Taylor), and the outsider Mike (Chosen Jacobs), strange and horrifying apparitions begin to plague them. A painting that has haunted Stanley comes to life, a rotted man confronts Eddie, and Bill sees visions of his missing brother. However, one thing unifies their terrors – the appearance of a hideous clown. As the group digs deeper into the past of Derry and Pennywise, their lives become evermore endangered.

Immediately apparent is the genuine sense of friendship in these characters. Indeed, a key theme here is of friendships emerging to help comfort children who have otherwise had intensely damaged upbringings. Ben struggles with a sense of identity and belonging having just recently moved to Derry. Mike similarly struggles to accept a role in life he isn’t comfortable with. Bill’s desperation to find Georgie opposes his parents’ aggressive belief that their son is dead. Scarring though their backgrounds may be, the group’s ability to accept one another promotes an affectionate camaraderie that consequently enables them to face Pennywise. The film ultimately asserts an optimistic outlook about growth and finding strength through those whom we trust and love.

Bringing these themes to compelling life are the brilliant performances of the young cast. Jaeden Lieberher grasps the weight of Bill’s loss remarkably well. Jeremy Ray Taylor imbues Ben with a sympathetic edge that never seems disingenuous. A lesser film may have simply played up the fact that he’s not a skinny child and who’s bullied because of it, but Taylor adds a depth that makes us feel for his character, not just his situation.

One must mention Bill Skarsgård as Pennywise. With a hideous baby-like face and a smile that can’t be matched, the various cracks and croaks of Skarsgård’s vocal delivery construct a monster that has menace and then some. Pennywise’s first appearance to snatch Georgie away is palpably uncomfortable. The drool flowing from Skarsgård’s maw is horrifying, setting the tone for this iteration of Stephen King’s iconic clown. At times however, Skarsgård’s performance is somewhat mitigated by intrusive and rather obvious CGI. Though some might argue the merits of CGI to achieve ‘the impossible’, the digital effects on display here still have a glossy digital sheen that betrays their physical presence. As a result, whenever Pennywise switches to a digital image It ceases to scare.

Some of the CGI certainly has its merits however, such as the digital touch-ups afforded to Pennywise’s eyes – giving them an unsettling painted quality. This is not to deny the practical effects used either. Special mention must be given to Amalgamated Dynamics (Alien 3, Tremors, Death Becomes Her, Harbinger Down) and the makeup department for creating some fantastic makeup effects. Arguably Pennywise is at his scariest when simply as the clown, not only because it gives Skarsgård the chance to shine through but also because we receive a look at the fine makeup and prosthetics uninterrupted by digital ‘augmentation’.

Praise must be afforded as well to the film’s production designer Claude Paré and costume designer Janie Bryant. The film feels authentic in its realisation of the late 1980s. From the Gremlins (1984) poster in Bill’s room, to the advertisements for A Nightmare on Elm Street 5: The Dream Child (1989), to the beaten-up bikes of the kids, the film rarely feels disingenuous to the era it asserts. Perhaps then this is why the digital effects feel somewhat jarring – especially when some of the CGI iterations of Pennywise repeat the very modern cliché of a CGI monster opening its maw as it hurtles toward the camera (Alien: Covenant was another recent film to repeat this trend). Perhaps a stronger emphasis on practical effects could have completed the immersion into the era.

Regardless of misplaced digital effects and a slow pace that emerges toward the middle of the film, It is an effective, immersive, and compelling horror film. With its strong central performances and thoughtfully written characters, this latest adaptation of Stephen King’s novel is proof that horror is not to be dismissed as it so often is. Bill Skarsgård’s Pennywise is sure to haunt the nightmares of generations to come, just as the great Tim Curry’s did beforehand.

Review: It (2017)Regardless of misplaced digital effects and a slow pace that emerges toward the middle of the film, It is an effective, immersive, and compelling horror film. With its strong central performances and thoughtfully written characters, this latest adaptation of Stephen King’s novel is proof that horror is not to be dismissed as it so often is. Bill Skarsgård’s Pennywise is sure to haunt the nightmares of generations to come, just as the great Tim Curry’s did beforehand.