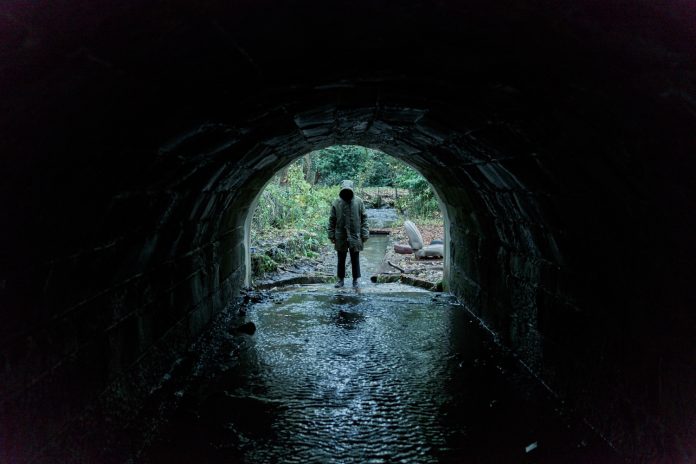 Andy Nyman and Jeremy Dyson’s Ghost Stories, which received its world premiere at the 61st BFI London Film Festival, really is something special. It is, in this critic’s humble opinion, the best British horror film since Jacques Tourneur’s Night of the Demon (1957). Such an assertion is not to ignore the brilliance of Terence Fisher’s The Curse of Frankenstein (1957) or Robin Hardy’s The Wicker Man (1974), but Ghost Stories hits upon the same unnerving majesty of Tourneur’s film – and exceeds it. Utterly gripping and horrifying, Ghost Stories is a film one should see alone, in the dark, where unnatural things tread…

Professor Philip Goodman (Andy Nyman) has made a career challenging the belief in the supernatural. When he receives an urgent invitation from his former idol, Goodman is startled to find him a changed man. His idol hands him a file containing three case studies – studies that are unexplainable. Goodman investigates each case, leading him to three damaged individuals haunted by what they’ve experienced. In flashback, we delve into the night that nightwatchman Tony Matthews (Paul Whitehouse) was alone in the dark with something unnatural, of the night when teenager Simon Rifkind (Alex Lawther) was hunted by something in the woods, and of how banker Mike Priddle (Martin Freeman) had his world changed permanently. With each case, Goodman struggles to maintain his rational scepticism as the very core of his beliefs is challenged.

Ghost Stories is exceptionally well-paced. From the moment when Philip Goodman is handed the case studies, the film rarely allows for one to breath; and one may need to. Each flashback, in turn lending an episodic nature to the narrative, is preceded by a brief introduction to the person who experienced it. Such a structure might seem prone to weak characters in how little personal exposition can be afforded prior to the flashback. However, not only does the tight script allow for such depth to come through, but the casting has been so precise that without lengthy dialogue, one is aware of the frame of a character. Paul Whitehouse is exceptional as nightwatchman Tony Matthews. With just a sad sip of his drink, and a long, empty gaze at Goodman, Whitehouse projects a man whose life will never be the same.

The performances are indeed a treat all round. Andy Nyman imbues Philip Goodman with an understated nervousness that is all too familiar. Philip is a character who arguably wants to believe his scepticism much more so than he actually does. Indeed, his faltering belief in his rationality is a brilliant tool for audience immersion. At the narrative’s beginning, we too likely believe as he does. With each case however, the cracks in Philip’s scepticism mirror our own.

Visually, Ghost Stories is horrifyingly delicious. Several shots call to mind Edward Scaife’s cinematography for Night of the Demon (1957). In the case of nervous teenager Simon Rifkind, several point-of-view shots of oncoming trees lit only by his car’s headlights are chilling. At no point does one feel safe. In such a simple setup, such terror is released in what we fear might emerge from the darkness when the headlights reach it.

Speaking of Night of the Demon, one wouldn’t be surprised if the fire demon of Tourneur’s horror appeared as a drawing on the walls of Simon’s expertly set-dressed bedroom – which is a triumph of lighting, mood, and production design.

Ghost Stories equally boasts some wonderful practical effects wizardry. One of the film’s most unsettling qualities is how palpable the unquiet spirits feel. The thing that stalks Simon Rifkind in the woods is made all the more horrifying by how clearly ‘real’ it is. It is there, physically, in that space with Simon. The way the light hits it; the way it moves; it is clearly a practical creation – and is all the more unnerving because of it. The film’s makeup department – including prosthetic makeup designer Krystian Mallet, animatronic effects designer Steven Harris, and makeup department head Bella Cruickshank – deserve much respect and admiration for their contributions.

Calling to mind the works of M.R. James, and of course Jacques Tourneur’s immortal Night of the Demon, Ghost Stories is a masterpiece of horror. Gripping in its pacing, performances, and production design, Jeremy Dyson and Andy Nyman have crafted a story that one truly invests in; and one can never quite look away. One is totally engaged in these characters, but can never quell the abject terror at what monstrous thing will show itself next. Enthusiastically recommended.

Review: Ghost Stories (2017)Calling to mind the works of M.R. James, and of course Jacques Tourneur’s immortal Night of the Demon, Ghost Stories is a masterpiece of horror. Gripping in its pacing, performances, and production design, Jeremy Dyson and Andy Nyman have crafted a story that one truly invests in; and one can never quite look away. One is totally engaged in these characters, but can never quell the abject terror at what monstrous thing will show itself next. Enthusiastically recommended.