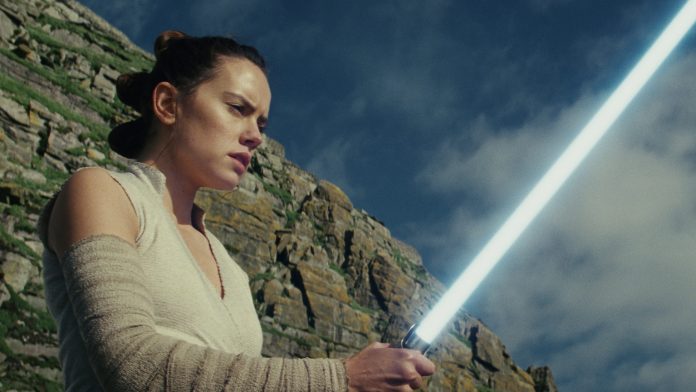 Warning: this review contains spoilers for The Last Jedi. For your benefit, please watch the film before reading this review.

Rian Johnson brings an unexpected and welcome next chapter to the Star Wars saga. The Last Jedi brilliantly develops characters, deepens the narrative, and touches on current political issues. Whilst some plot points are not developed properly, the overarching narrative is carried with grace by the superb performances of Mark Hamill, Adam Driver, and especially Carrie Fisher. Despite a few arguable flaws, this is a strong, well-crafted film – far from the “worst Star Wars film” that so many have leapt to call it.

After the destruction of the Starkiller Base, The First Order relentlessly pursue the Resistance’s fleet across the galaxy. As their cruisers struggle to stay out of reach of the imposing star destroyers, Rey (Daisy Ridley) struggles to convince a despondent Luke Skywalker (Mark Hamill) that the Jedi are needed once more. Luke cannot bring himself to face the impossible moral code of what the ‘Skywalker’ name has become; haunted by his past and the rise of Kylo Ren (Adam Driver). Meanwhile, Kylo Ren, goaded by Supreme Leader Snoke (Andy Serkis), realises the only way that he can achieve his potential: total destruction of the past…

This is a story about the will to continue. Character beliefs are strained and challenged. People find new meaning in their mission. Through almost unbearable situations, our protagonists find reasons to continue the fight; whether that be through personal morality (Finn, John Boyega), in saving who and what we love (Rose, Kelly Marie Tran), or in understanding when to fight (Poe, Oscar Isaac).

Occasionally, the pace is slowed by subplots that find themselves unresolved. Through Rose, Johnson touches on a current and poignant issue. The town of Canto Bight is a hive of wealth and decadence built on the suffering of the galaxy; on the selling of weapons. Rose’s fury at the arrogant self-indulgence inherent in Canto Bight’s residents is significant; the downtrodden face to face with the architects of misery. Such a premise is worthy of its own film, and that is precisely its problem. The subject is left unresolved. Aside from some expository dialogue from Rose, no further exploration is afforded. That the issue is then ‘resolved’ by a jarring CGI-laden sequence of Rose and Finn riding Fathiers (large, horse-like creatures) through the town is disappointing. Consequently, with such a weak end to a subplot brimming with political potential, the whole escapade seems somewhat unnecessary.

That being said, Johnson does manage to brilliantly touch upon another topical political subject. Benicio Del Toro’s enigmatically named character, DJ, a cynical code-breaker hired by Finn and Rose, exemplifies a very recent cultural phenomenon. Finding that both sides of the conflict are flawed and wishing to devote himself elsewhere, DJ subtly berates Finn’s fundamental belief in right and wrong. DJ’s belief in the moral equivalency of each side allows for Johnson to criticise such ways of thinking. If anything, The Last Jedi shows that the indifference of false equivalency ultimately leads to compliancy with the oppressor; Del Toro’s character eventually siding with the First Order in return for money. It may be easy to disengage from issues by claiming that both sides are “as bad as each other”, but such disengagement ignores the complexity of these conflicts, and lets the oppressors continue unabated.

In terms of character, Luke develops brilliantly. Here is a character whose life and deeds have (in his eyes) been tainted by a single moment of weakness. Luke is all too aware of the destructive power of hero worship. He can no longer sustain his own moral code once the name ‘Skywalker’ became emblematic of something beyond him. Suddenly, the strained look that Luke gives to Rey at the end of The Force Awakens becomes charged; he sees nothing but his failure. In teaching Rey, Luke is haunted by his actions in creating Kylo Ren. Johnson does a respectable job of keeping the audience searching for the truth. Who is to be blamed for Ben Solo becoming Ren? The film keeps the audience guessing until the truth is revealed. When it is revealed, Luke’s character is given a depth that Mark Hamill projects truthfully.

Adam Driver’s performance as Kylo Ren is horrifyingly unpredictable. Steve Yedlin’s cinematography affords Ren several beautifully framed close-ups. Such visuals provide the basis on which Driver delivers an unhinged beast. As the narrative progresses, Ren becomes confident in his belief that the past must be destroyed for the potential of the future to be realised. This marks a significant change from the Kylo Ren of The Force Awakens, whose idolisation of Darth Vader haunted him. Now, unbound by his former grasp on his grandfather’s image, Kylo Ren is the monster that Rey believed him to be.

Mention must be given to Carrie Fisher. Her final film performance is wonderful. Leia is a woman who has been through hell and back, and yet retains a stoic demeanour fitting of the leader she is. Despite the chaos enclosing around her, Leia never cracks. Carrie Fisher carries that stoicism with grace and awe. In moments of silence, so much emotion is communicated in her eyes. In one of the film’s key sequences, Leia and her son make a connection through the Force. In separate spaces, their minds meet, and in Leia’s eyes we see a wealth of loss that is incalculable. In the film’s credits, there is a loving tribute to Carrie Fisher. It reads, “In Loving Memory of Our Princess” Rest in peace, Carrie.

The Last Jedi treads a difficult line with its visual effects. Some of its CGI is genuinely effective. Andy Serkis’ Supreme Leader Snoke boasts some very photo-realistic digital animation. Serkis’ performance clearly brings the CGI to life, but the skill and talent of the VFX crew provides the firm basis on which Serkis crafts Snoke.

On the other hand, some of the film’s CGI has been used to lesser success. At the Resistance base on Crait, the fox-like vulptex creatures live. As has been boasted on social media, these creatures were initially beautifully-crafted animatronic creations, complete with realistic movements. Contrary to what social media videos have implied, none of the vultpex creatures are practical in the final film. All of them are comprised of CGI that falls short of being convincing. This is a small criticism as the vulptex play an admittedly minor role in the overall film, but it is disappointing seeing how brilliant their practical counterparts initially looked.

The balance of practical and digital has been a difficult one for this new trilogy. Practical effects are promised to no end in promotional material only to be pushed to the narrative and spatial background in the final films. This was evident in The Force Awakens and  especially Rogue One, and it continues into The Last Jedi. However, the balance fairs a little better this time around. The Porgs, small puffin-like creatures from Luke’s island on Ahch-To, are a mixture of practical animatronics and digital renditions. Neal Scanlan’s creature effects crew have produced wonderfully emotive practical versions of the Porgs which stand apart from their digital counterparts.

The high point for practical effects in The Last Jedi comes with the return of one of the franchise’s most beloved characters. As Luke Skywalker prepares to totally disavow the Jedi, Jedi Master Yoda appears to him as a Force ghost. Whilst audiences may initially think him to be a digital creation, as soon as Yoda begins to move and speak, we are treated to a beautiful practical puppet voiced by Frank Oz. Having this practical Yoda is one of the many ways that Johnson honours the original trilogy. What is wonderful however, is that Yoda’s appearance does not feel forced. This is not simply a gratuitous throwback as has been a common criticism of both The Force Awakens and Gareth Edwards’ Rogue One. Here, Yoda appears for a reason. Yoda reminds Luke of the importance of growth; that the future is shaped by the young we teach. Yoda’s importance in The Last Jedi is wonderfully encapsulated in the line, “we are what they grow beyond”. Small moments like Yoda’s appearance display both the brilliance of practical effects and the affection that Rian Johnson has for these characters.

Despite the weakness of some of its subplots, The Last Jedi is a welcome and necessary next step for the Star Wars saga. Some ardent fans may decry the film for its choices, but Rian Johnson has delivered a strong point for the series. That this film has divided fans is unsurprising, but the vehemence with which some have projected their disdain is questionable. Regardless of how fans feel in the moment, this critic reckons that The Last Jedi will age well, its bold choices standing the test of cinematic time.

Review: Star Wars: The Last Jedi (2017)Despite the weakness of some of its subplots, The Last Jedi is a welcome and necessary next step for the Star Wars saga. Some ardent fans may decry the film for its choices, but Rian Johnson has delivered a strong point for the series. That this film has divided fans is unsurprising, but the vehemence with which some have projected their disdain is questionable. Regardless of how fans feel in the moment, this critic reckons that The Last Jedi will age well, its bold choices standing the test of cinematic time.