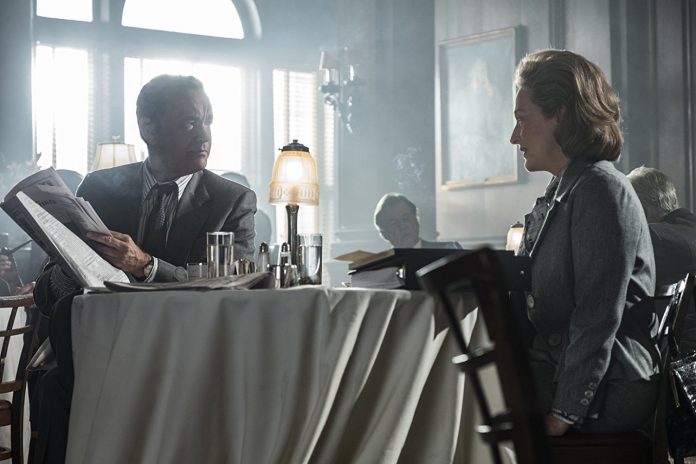 Pertinent to our real-life political narratives, Steven Spielberg’s The Post complements a gripping story with truthful depth to the characters played by Tom Hanks and Meryl Streep. This is a film about principles, about asserting the truth, and about having the courage to make ultimate decisions. Despite some underwhelming visuals, the production design and character performances stir this important part of history.

Years after State Department military analyst Daniel Ellsberg (Matthew Rhys) visited Vietnam to document the progress of the war, he begins covertly photocopying classified reports. These reports document the roots of the Vietnam War – from the Truman administration, through Eisenhower’s presidency, and into Kennedy’s. These are then leaked to the reporters at The New York Times, who run a story. Meanwhile, Katharine Graham (Meryl Streep) prepares a stock market launch of The Washington Post, the paper she inherited from her late husband. Struggling to assert herself in rooms full of domineering men, Graham is unsure of the direction she should take the paper. Editor-in -chief Ben Bradlee (Tom Hanks) realises that they too must run a story on the infamous Pentagon Papers, despite the legal injunction The New York Times now face from Nixon’s administration. Convictions are strained, and reputations face undoing, and Katharine must decide whether to run their own story and risk it all.

That the film tells of such a significant moment in U.S. history makes it worth watching, but it is the performances of Hanks and Streep that arguably make this a good film.

At first, one may feel unsure of Streep’s performance. Katharine seems somewhat disconnected and distant from her responsibilities as owner of The Washington Post. However, the vulnerability with which Streep portrays Katharine becomes significant in a poignant sequence between Katharine and her daughter (Alison Brie). Katharine explains that her life has been shaped by the status quo and ‘the way things were’. Never before had she had to work, and having the paper passed onto her upon her husband’s death is daunting. For the first time in her life, she has the luxury of choice in a situation that demands a decision. She is immediately faced with both the responsibility for the newspaper, and the choice of how that paper is used. Having that responsibility thrust upon a personality that struggles with assertion lends Streep’s worried performance truth – and brilliance. One empathises with that vulnerability; because at times, we all must face decisions the impact of which we won’t know until we’ve made them.

Furthermore, Spielberg consistently frames Streep in amongst homogenous groups of men. Her timid performance is emphasised by the enclosing men around her, second-guessing every decision she makes. That she manages to go forth in her own choices is arguably empowering.

Performance aside, one could argue that her character appears too secondary to the primary leaked documents narrative in the film’s first half, and therefore that may contribute to an initial sense that Streep’s subdued performance is too mild. That being said, having her only begin to enter the key proceedings from the middle onwards perhaps better reflects the experiences of the character – someone who has taken a backseat role for much of her life until suddenly finding herself at the wheel.

Tom Hanks’ performance, whilst rarely shifting throughout, is very captivating. His is a character with conviction. That conviction is also a point that may divide opinion. On the surface, the way that Ben is written is that from beginning to end, he is adamant about pursuing the story of the leaked documents. Initially, it might be tempting to say that he does not develop enough as a character. He begins wanting the story published and he ends wanting the story published.

However, when one also considers the motive behind his conviction, the character is arguably more layered than first thought. At first, the desire to publish primarily comes as a means of getting a better story for the newspaper, but once the weight of the Pentagon Papers becomes all too clear, Ben’s motives become more firmly rooted in the betterment of the American public. Depth is added to his beliefs in a dialogue exchange between Ben and Katharine, in which Ben tells of how his friendship with Kennedy faded. We learn of how he came to realise that there are times when our morality no longer aligns with those of the people we consider our friends. Hanks’ delivery sells us the character, and with it the conviction.

The production design and art direction capture the era wonderfully, though they can be let down at times by the camera work. On occasion, the 180-degree rule appears to be broken, and certain shots seem jarring because of it. At other points, the camera sits still for thirty seconds or more on two characters. Whilst this does help to focus our attention on dialogue content, these lengthy static shots sometimes become noticeable and therefore distracting.

The Post is a timely and relevant drama in an age where certain leaders have deliberately antagonised the press. That it has been crafted with brilliant, truthful performances lends it credence. Despite some moments where the camera appears to break one’s engagement, it is primarily used effectively for character detail.

Nixon’s administration may seem far away, but The Post uses the corruption of the past to make us aware of our current cultural surroundings. One feels the urgency of The Post in a two-fold manner: in the actions of Ben Bradlee and Katharine Graham, but also in its reflective social commentary.

Review: The Post (2017)Nixon’s administration may seem far away, but The Post uses the corruption of the past to make us aware of our cultural surroundings. One feels the urgency of The Post in a two-fold manner: in the actions of Ben Bradlee and Katharine Graham, but also in its reflective social commentary.