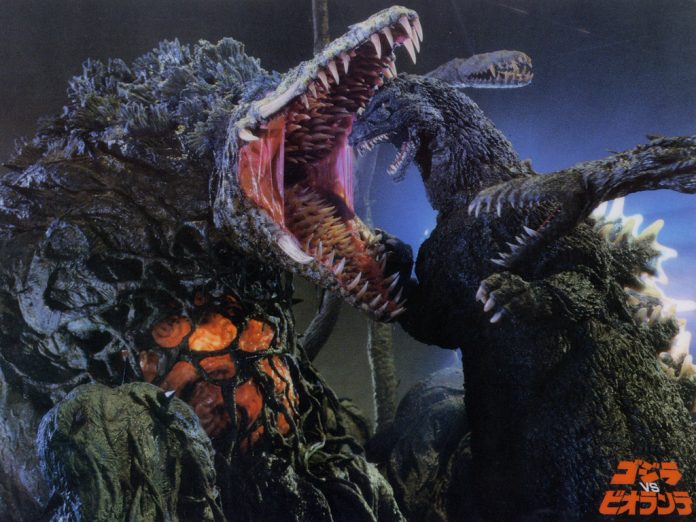 Immediately following the events of The Return of Godzilla (1984), Godzilla cells are retrieved from the rubble of Tokyo. In the fictional nation of Saradia, Dr. Shiragami (Kôji Takahashi) is attempting to use the regenerative abilities of Godzilla’s cells to create super plants to sustain the country in the event that their oil reserves run out. When a bomb (planted by rival company, BioMajor) destroys one of Shiragami’s laboratories, it also kills his daughter, Erika (Yasuko Sawaguchi). Five years later, Shiragami is still grief-stricken. His wish to preserve his daughter’s life goes too far as he merges a Godzilla cell with both human and rose cells, the monstrous consequence of which is Biollante. Meanwhile, Godzilla’s cells are sought after by companies all over the world, with the ultimate goal of creating anti-nuclear bacteria – which could tip the balance of world power…

Some of the very best Godzilla films are able to expand upon Godzilla’s base meaning (a warning against nuclear weaponry) to encompass similar themes. Yoshimitsu Banno’s Godzilla vs. Hedorah (1971) touches on Godzilla’s nuclear roots but is more immediately concerned with pollution and environmental damage. Gareth Edward’s Godzilla (2014) understands the meaning of the series’ base fears of nuclear devastation, but it expands the scope of those fears to include recent tragedies (the film’s visuals evoke both the 9/11 attacks as well as the 2004 Boxing Day tsunami). Similarly, Kazuki Ômori’s Godzilla vs Biollante intertwines the series’ focus on nuclear power with a discussion of bioengineering.

Dr. Shiragami is comparable to Mary Shelley’s Frankenstein, in that he’s dedicated to his interpretation of science to the point of arrogance. Another scientist, Dr. Kirishima (Kunihiko Mitamura), objects to creating the anti-nuclear bacteria on the grounds that it would render nuclear weapons useless overnight. If lethal radiation left behind by nuclear detonations can be dealt with by using such bacteria, then one of the key barriers to their use has been lifted, possibly prompting the use of nuclear weapons more freely. Shiragami berates him, telling him that he does not understand the meaning of science.

On one hand, the character is brilliantly written in the film’s first half. Shiragami’s loss and grief surrounding the death of his daughter establishes the reason for his creation of Biollante. In his desperation to keep even a small portion of his daughter alive, he creates a super beast spawned from Godzilla itself. The issue is that Shiragami does not regret his actions, which is where the Frankenstein comparison can be made. Much like Victor Frankenstein, Shiragami spends most of his time moping, condescendingly asserting his views, and hypocritically exclaiming that the press don’t understand real science. Of course, this characterisation would not be a problem (indeed, Shelley’s depiction of Frankenstein as an ignorantly immoral person is constructed superbly) if it were not for the fact that occasionally Shiragami comes close to regret; for example, in one moment, Shiragami openly declares that he may have made a mistake. With such moments, one is unsure of his character – is he a villain or just misunderstood?  Shiragami’s development leaves an unsatisfying and ambiguous air.

Biollante is a tragic beast, and with her the Frankenstein parallels become more apparent. In Shelley’s novel, Frankenstein is so appalled by his own creation that he rejects it, forming the crux of the narrative. With Biollante, whilst Shiragami is not horrified by his creation, he is passive, disengaged, and negligent toward her existence. For a creature that (to Shiragami) symbolises an extension of his deceased daughter’s life, his lack of emotion when Biollante is harmed by Godzilla is deeply troubling. Of course, this leads back to a discussion of Shiragami’s characterisation. With the film’s focus on the misuse of science, Shiragami’s arrogance and disengagement from Biollante make for a character that sharply exemplifies the narrative’s meaning. However, the ambiguity of the character’s feelings muddies the waters and makes character dissections such as this difficult to conclude decisively.

Godzilla vs Biollante also offers extraordinary special effects. The 1989 Godzilla suit is imposing and impressive, improving on the strengths of the 1984 Godzilla suit and establishing the design template for the rest of the ’90s run of films. Special effects director Koichi Kawakita delivers some beautiful and electrifying visuals in Godzilla’s rampage through Osaka. In particular, a shot of Colonel Gondo, framed in the foreground as Godzilla approaches in the background, is superb. Biollante herself is a sight to behold and is a masterpiece of wirework engineering. Whilst Kawakita’s effects sequences throughout the rest of the ’90s run would become known for their over-reliance on optical beam effects, the similar work presented here is effective and arresting, adding to the immense sense of power that Biollante exudes.

However, a key detractor for Godzilla vs Biollante is its pace. Whilst the film builds momentum terrifically in its first half, the film does noticeably slow down after Godzilla shows up. Whilst Godzilla battling the Japanese Self Defence Force’s latest weapon, the Super X2, is technically and visually impressive, such sequences tend to last longer than they need to. Indeed, upon Godzilla’s arrival, it feels as though all other narrative threads are temporarily suspended as we witness defence line after defence line go up against Godzilla, drawing focus away from the more pressing story threads that we’re eager to return to.

Despite the film’s uneven characters and occasional pacing issues, Godzilla vs Biollante remains an entertaining and thought-provoking film. Although not all of the questions the film raises are answered with satisfaction, the ambition and scope of the film is unmistakable. The spectacular special effects help to realise the film’s scope, lending power and weight to the titular monsters. Although a little rough in its overall execution, the story of Godzilla vs Biollante is one of the most fascinating of the franchise. This is a film that deserves close analysis and consideration.

Review: Godzilla vs Biollante (1989)Despite the film’s uneven characters and occasional pacing issues, Godzilla vs Biollante remains an entertaining and thought-provoking film. Although not all of the questions the film raises are answered with satisfaction, the ambition and scope of the film is unmistakable. The spectacular special effects help to realise the film’s scope brilliantly, lending power and weight to the titular monsters and providing a brilliant visual payoff to the key narrative threads. The character performances are generally excellent, with only a few small criticisms to be had with how restrained Mitamura and Takahashi are at times. Although a little rough in its overall execution, the story of Godzilla vs Biollante is one of the most fascinating of the franchise. This is a film that deserves close analysis and consideration.