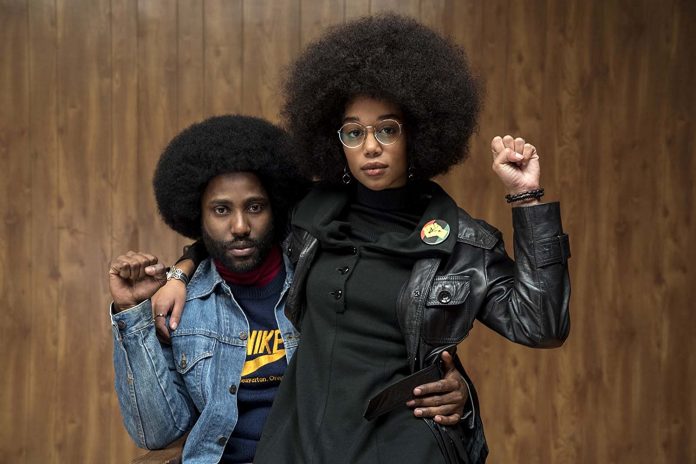 Spike Lee’s potent depiction of a black detective infiltrating the Ku Klux Klan is a sharp look at the insidiousness of respectability politics, of social naivety, and of our own cultural climate. Wickedly funny, socially aware, and depressingly real, BlacKkKlansman is a masterwork of political precision.

In 1979, Ron Stallworth (a stoic John David Washington) becomes the first black detective in the Colorado Springs Police Department. After a moral dilemma when tasked to covertly observe a local Black Power meeting, Stallworth notices an advertisement in the newspaper for the Ku Klux Klan. Within moments, Stallworth is on the phone to the local branch expressing his disdain for every ethic minority one can imagine, duping them into believing he’s one of their own and thus beginning his infiltration of the KKK. On the phone, the clueless white supremacists speak to Stallworth, but it is Flip Zimmerman (a subdued Adam Driver), a Jewish man whose ethnic identity has been of no concern to him until now, who meets them in person. Together, the Ron/Flip duo observe the deepening hatred of the Klan, whose murderous intentions become almost unstoppable…

BlacKkKlansman is a deeply upsetting film, but one that enriches the viewer through its fearless depiction of some “fo’ real, fo’ real sh*t.” John David Washington is remarkable in the lead role. Washington’s deep stare reflects a deep pain that he’s forced to accept as part of his job. The casual and aggressive racism hurled at him by his fellow officers frames the unforgiving world in which these characters operate; either you work from within and let the abuse wash over you, or you demand something better and see yourself ostracised in the process – as is the case for the Black Power movement led by Laura Harrier as Patrice Dumas, the compelling president of the Black Student’s Union. The world that Spike Lee crafts allows Washington to construct a stoic but torn individual, at once aware of the injustices around him but unable to be as forthright as Patrice because he still operates within the system.

Adam Driver imbues Flip Zimmerman with a nuance that deepens as the film progresses. Forced into the wasp’s nest that is the KKK, Flip’s repressed sense of injustice is stirred in the face of personal abuse that – until now – he believed did not affect him. Driver carries Flip’s careful introspection well, and the altruism with which Washington plays Ron frames the development of Flip’s character wonderfully.

BlacKkKlansman says so much about the insidiousness of respectability politics; that a person must conform to behaviour deemed appropriate by an oppressor in order to be listened to. The very nature of Ron’s infiltration of the KKK realises themes of how and when people are acknowledged. One particularly unpleasant officer, Landers (Frederick Weller), exemplifies an exaggerated but meaningful depiction of how marginalized people must articulate their grievances in line with the manner of those in power in order to be heard. Ron plays this system for all its worth, adopting the vernacular (or ‘King’s speak’ as he calls it) of white society to get him as far as it has. However, those who don’t posses this ability are barred from fair treatment as Black Power members are routinely arrested and the very language of black people is examined as a means to identify them – discussed with impeccable comedic timing between Stallworth and KKK leader David Duke (Topher Grace).

On this message and others, some might argue that Spike Lee is blunt. They’re right, BlacKkKlansman is very blunt and it is very powerful because of it. Instead of treading a subtle line of parallels between 2018 and the 1970s, Lee pointedly reveals the grotesque degree of racism in our society today. Unlike those in the film, Lee will not have his voice changed by notions of respectability, of what is “appropriate” or “polite” to say. Lee has projected a direct and emotional message and has produced a truthful film that is brilliant because of it.

The film ends with real footage of the Charlottesville protests of 2017. Included in that footage is the moment where a white supremacist drove his car into a crowd of anti-racist and Black Lives Matter counter-protestors, killing a young woman. The intentional inclusion of such upsetting images is one of Lee’s most daring but self-aware decisions here. The story of Ron, Flip, Patrice, and others may have come to its end, but the hate of which it speaks is still here.

The film does, however, allow for subtler commentary in its discussion of which mode of change works better: abandoning the system for something better altogether, or working within the system to affect change. The film does not present a clear answer, and the discussion permeates from the dialogue between Patrice and Ron into their very actions. Ron’s operation to expose the KKK is run within a white-dominated institution. Patrice’s facilitation of Black Power speakers at their meetings allows those attending to have a sense of belonging that they aren’t permitted elsewhere – beautifully realised by some well-edited close-ups. Instead of a clear answer, the film does provide motivation. It compels us that regardless of how, change for the better needs to happen and that it starts with us as individuals. In the film, Kwame Ture (Corey Hawkins) is one such speaker at a Black Power meeting, and as he says, “if not I, then who?”

An interesting element to the film is Lee’s clear understanding of the influence of cinema itself. Ron speaks positively to a sceptical Patrice of such “blaxploitation” films as Shaft (1971), and Coffy (1973), clearly enamoured with the stories and positions that those films allow Black people to occupy. Patrice reasonably counters that such films are exploitative, and don’t sincerely portray Black people with wholly decent intentions. Fair as her criticisms may be, these films’ meaning to Ron is significant. For him, they allow for a more fulfilling image of Black people than perhaps real life offers. By comparison, the KKK gleefully watches 1915’s The Birth of a Nation, shouting and cheering whenever Black people are humiliated or murdered onscreen. The Birth of a Nation fits their mantra of returning America to a mythical yesteryear where non-white people were subjugated. Spike Lee understands film’s power to realise emotion. It can express the desires of racist self-preservation, giving shape to a vision of a perceived bygone era that becomes the symbolic target of the KKK. Meanwhile, despite Patrice’s reasonable criticisms, Ron’s affection for films like Shaft understandably situate his enjoyment of being represented in powerful cinematic roles whilst in a world that won’t represent him. Cinema can look back, or it can look forward. It’s clear which way Spike Lee is looking.

Whilst perhaps too forceful for some, BlacKkKlansman is nonetheless an extremely well crafted film. Its potent parallels between the racism of the past with that of the present lend the film an undeniable sense of urgency. The largely ensemble cast gives form and depth to Lee’s vision with their considered performances. John David Washington and Adam Driver play off of one another, stirring each other’s character development. The juxtaposition of the film’s comedy with the horrifying views and actions of the KKK keep the audience unnerved throughout. With the audience unable to settle in, the film’s pace is tight. This is a remarkable piece of cinema, one that understands its position as a cultural artefact capable of change. BlacKkKlansman is an immense achievement for Spike Lee.

Review: BlacKkKlansman (2018)Whilst perhaps too forceful for some, BlacKkKlansman is nonetheless an extremely well crafted film. Its potent parallels between the racism of the past with that of the present lend the film an undeniable sense of urgency. The largely ensemble cast gives form and depth to Lee’s vision with their considered performances. John David Washington and Adam Driver play off of one another, stirring each other’s character development. The juxtaposition of the film’s comedy with the horrifying views and actions of the KKK keep the audience unnerved throughout. With the audience unable to settle in, the film’s pace is tight. This is a remarkable piece of cinema, one that understands its position as a cultural artefact capable of change. BlacKkKlansman is an immense achievement for Spike Lee.