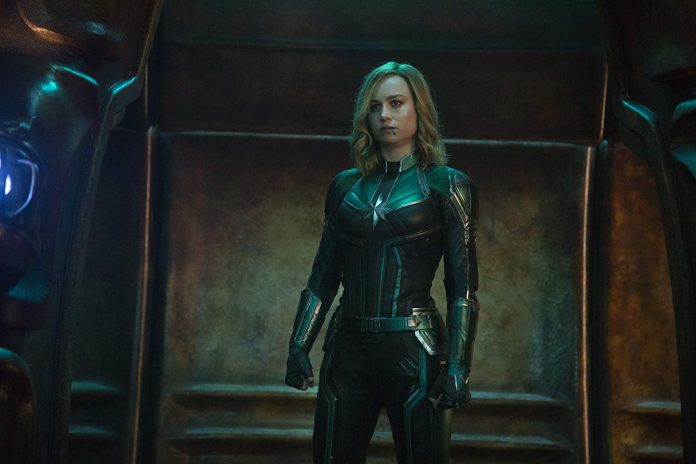 Captain Marvel is really quite good. Despite what the online naysayers may have said, incorrectly predicting doom and gloom for the film’s release, Captain Marvel is funny, well-paced, well-acted, and gets across some admirable messages – on top of its mammoth task of headlining a female superhero. This shouldn’t be a mammoth task, but given that a vocal corner of the internet figuratively defecates at the mere suggestion of womanhood entering “their” sacred comics (as if it hasn’t for decades already), Captain Marvel deserves its praise.

Brie Larson plays Vers, a Kree warrior from the planet Hala. Part of an elite team, she’s tasked with finding one of their spies who’s carrying intelligence on the advancing Skrull – a race of people deemed an infestation and a threat due to their shapeshifting abilities. During the mission, Vers is captured by the Skrull, and in searching her mind, the Skrull begin to unlock hidden memories in her; memories of a time she doesn’t recognise, of Earth, of a childhood, of friends left behind, and of a mysterious Dr. Wendy Lawson (Annette Benning). Is all as she thought, or will her arrival on Earth in 1995 lead her to answers?

Larson performs Vers (later, Carol Danvers) with a good sense of humour, and a great self-awareness. With sometimes as little as a smirk, Larson can expertly set a quip or a one-liner, and imbue it with a knowing modesty. As a result, the dialogue never becomes pretentious. Larson’s also responsible for some of the film’s most enjoyable air-punch moments – one such toward the film’s end certainly proves itself as gleefully satisfying.

It’s likely that the lack of pretentiousness allows the film to get across its messages with such success. Captain Marvel touches on the evils of imperialism, and the immorality of othering. It’s a genuinely surprising, and welcome, message. It elevates the film to a place of discussion rarely found in Marvel’s superhero offerings. Some might argue that the way in which the film does so is too simplistic. On the contrary, it is precisely this simplicity that allows things to work. The kinds of films that might discuss these themes with greater nuance are, realistically, not the kind of films drawing the massive audiences that Marvel’s superhero offerings are. That Captain Marvel manages to broach these subjects in the unfortunate world climate we find ourselves in, where refugees are regularly demonised, is worthy of respect that it speaks of them to such a broad audience; especially given that the film was already destined to take a beating from certain fans for whom the phrase “virtue signalling” springs to mind at even the most tepid of progressive stances.

Ben Mendelsohn’s Talos, the Skrull leader, also forms a key foundation for the success of such themes. Beneath beautifully-crafted prosthetic makeup, Mendelsohn gets across a great degree of pathos, but also subtly communicates a justified frustration with the events that have led him to Vers/Carol. Given that most Marvel films now feature at least one CGI character, that Mendelsohn’s Talos and the rest of the Skrull were portrayed via practical makeup appliances is commendable.

Samuel L. Jackson is a lot of fun as Nick Fury, though the de-aging CGI gives him a plastic-y sheen that takes a while for one to ignore. The CGI on Clark Gregg’s Coulson fares slightly worse, with a rubbery look that jars. On the CGI-front, Captain Marvel differs little from other Marvel entries, and the climax becomes a cluttered mess of digital explosions and spaceships. Indeed, everything but the CGI kitchen sink is thrown in toward the end for Vers/Carol to smash through. The digital excesses of Captain Marvel don’t ruin the film by any stretch, and for the most part the CGI is effective and convincing. The digital clutter of the climax does, however, take one out of the moment at what should be the exciting ending.

Captain Marvel is a lot of fun. It’s wit and creativity with Larson’s Vers/Carol make for a compelling and charismatic hero. The film’s approach to poignant topics also elevates it to one of the most thoughtful of the current spate of superhero fare. Its strong performances support the discussion of such themes, and effectively tie the story together. Whilst some qualms may be had with how visual effects have been used, it’s never enough to tarnish the film as a whole.

Known for its distinct colour palette and sensual summery setting, Call Me By Your Name is the 2017 adaptation of André Aciman's coming-of-age novel of the...
Read more
Reviews

Inlet, Hum’s first new material in as long as I have been alive, dropped with practically no warning one Tuesday in June, as if...
Read more
Artist Spotlight

Ohmme, the Chicago-based duo comprised of Macie Stewart and Sima Cunningham, have made a name for themselves for making experimental rock music that challenges...
Read more

Audrey Tautou stars as the titular character in this charming French romantic comedy directed by Jean-Pierre Jeunet. After mistakenly diagnosing her with a heart...
Read more
Art & Photography

Our Culture is privileged to present an interview with Hamish Steele, creator of the DeadEndia comic series.  DeadEndia "follows the adventures of Barney and Norma, two humans...
Read more
Art & Photography

Reece van der Merwe, a photographer and creative out of South Africa, has presented a superb editorial-like series named Leg Day. In this short but...
Read more
Film & TV

Ennio Morricone, the legendary Italian composer who scored films such as The Good, the Bad and the Ugly, The Mission and Cinema Paradiso, has...
Read more
Film & TV

10 Beautiful Stills From The Perks of Being a Wallflower (2012)

Stephen Chbosky's popular young adult novel of the same name was adapted for the big screen in 2012 to positive reception. A fifteen-year-old boy...
Read more