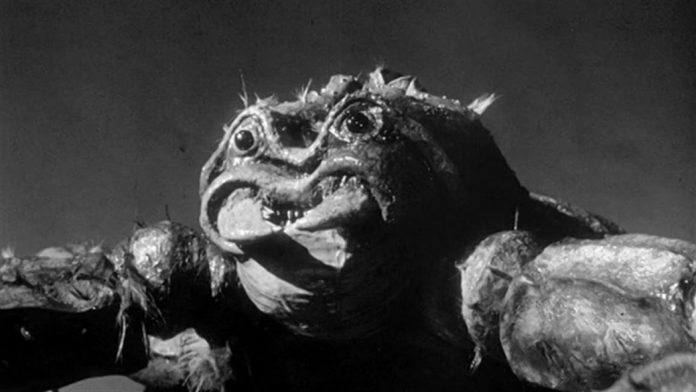 When cattle turn up dead, people go missing, and cars are found battered to bits, geologists Hank Scott (Richard Denning) and Arturo Ramos (Carlos Rivas) arrive at the Mexican village of San Lorenzo with several questions. There, they meet local ranch-owner Teresa (Mara Corday), who’s trying to maintain her workforce amidst the strange happenings. Hank and Arturo had arrived in the region to research a recently formed volcano, but the strange occurrences have thrown them. The culprits soon reveal themselves: a legion of giant, prehistoric scorpions that emerged at the same time as the volcano…

One of the many things that The Black Scorpion excels at is its pace and, in turn, its structure. Tension is built mercilessly in the film’s first act, with one mystery after another teased and revealed carefully. This is helped in large part by Paul Sawtell’s arresting musical score, combining high and low-pitched horns to amplify panic. When the scorpions are finally revealed, it is an expertly constructed scene, wherein three hapless telephone repairmen are attacked by one of the scorpions.

Over 60 years on, that first appearance of the monster scorpions remains genuinely effective. The brilliance of the film’s structure is how the pace isn’t lost in the aftermath. Several films of the monster sub-genre fall prey to a marked decline in the pace following the reveal of the creature. With the mystery gone, the focus shifts to the heroes’ struggle to formulate a plan of retaliation and then enact it – and it’s often here that the pace grinds to a halt (as in The Deadly Mantis, Beginning of the End, and The Monster that Challenged the World – all 1957). Whilst the focus still shifts in this way in The Black Scorpion, the script compensates for it and raises the stakes. For example, before a plan to seal the scorpions in caves beneath the volcano can be put into action, our heroes must descend into the dangerous caverns to confirm the monsters’ presence – which makes for a truly gripping sequence.

Unsatisfied with just that, The Black Scorpion also has the scorpions swarm and attack a train. The scene is one of the picture’s many highlights, with some genuinely gruesome images of the scorpions picking off survivors and fighting amongst themselves to eat them. Indeed, the visual shock of several giant scorpions, silhouetted against the night sky with a train wreckage beneath them, is truly remarkable.

The stop-motion effects are very convincing, and Pete Peterson (under Willis O’Brien’s supervision) gives a distinct menace to the scorpions. Much maligned is the prop head used for close-ups. It may be true that it hardly resembles an actual scorpion’s face, but such qualms are fairly inconsequential. With its drooling maw, and glossy, popping eyes, the head prop is actually rather disturbing to look at. When it appears for the first time, and looks directly at you, The Black Scorpion is catapulted to the very best of monster cinema.

Our protagonists are thinly constructed, but charismatic. Hank is the all-American macho man, whose eagerness to abandon his and Arturo’s research at the first sight of Teresa is funny. One feels that Mara Corday in particular is having fun with her role, which makes her all the more enjoyable to watch.

Some of the dialogue is a tad dated, especially where social dynamics are concerned. Hank and Arturo joke about marriage as a drag in a way that musters a sigh more than a chuckle. There are lines that most critics, I’m sure, would find atrocious, such as this exchange following a kiss between Hank and Teresa:

“I guess I wanted to see what you’d do”

Cheesy? Yes! Inept? Not on your life. I refuse to believe that this is anything other than a razor-sharp wit and a satiric take on your usual romantic dialogue. Mara Corday and Richard Denning have great on-screen chemistry that sells the exchange in a genuinely funny way. Of course, it may just be cheesy romantic dialogue, but that’s the beauty of subjective film criticism. Take that, film canon.

The Black Scorpion is a marvellous film. It steadily builds tension until its scorpions menace the characters and the audience. The special effects are thrilling and highly effective, giving character to the awesome arachnids. The film’s cast are charismatic and likeable, even if the archaic notions of the 1950s occasionally creep into their dialogue. Richard Denning and Mara Corday have a fabulous onscreen dynamic that sells their romance in a way that often escapes even high-end dramas. With its elements forming a cohesive story, The Black Scorpion is, perhaps, a contender for the perfect definition of the term ‘creature feature’