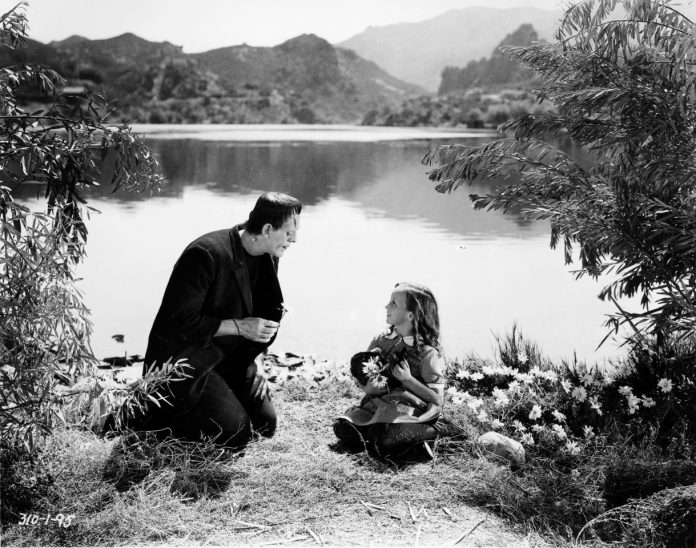 What can I say about Frankenstein that hasn’t been said before?

I first saw James Whale’s Frankenstein when I was eighteen years old, shortly after I finished my A-Level exams. Mary Shelley’s immortal novel was one I’d studied for my English Literature exam, and I’d thoroughly enjoyed it. Growing up a horror fan, I was eager to see Whale’s adaptation, but I refused to let myself watch it before I’d finished my exams. I didn’t want Whale’s take on Shelley’s story to influence my perspective. In hindsight, it may have improved it.

When I finally saw the film, it was better than I could have hoped. Many have pointed out the liberties that the film takes with the text, being more of a thematic adaptation than totally faithful. However, I’d argue that some of the central elements Shelley depicts so precisely are front and centre in Whale’s film. Victor Frankenstein, in the text, is arrogant and self-absorbed, rarely coming close to introspection or regret. Colin Clive’s performance as Henry Frankenstein (changed from Victor) matches much of that presentation. In a particularly troubling moment, as Frankenstein watches his assistant, Fritz, beating the monster, Henry staggers away saying “Come away, Fritz. Leave it alone, leave it alone”. You get a sense that he’s talking as much to himself as he is to Fritz, and his exhausted tone betrays a great deal of apathy and growing disdain. Henry’s reaction is almost non-existent upon discovering Fritz’s body, hanged by the monster. This is further compounded by Henry’s focus shifting totally to his marriage once the monster has been taken out of his hands. This thing, this project, that absorbed his attention and nearly destroyed his relationships, is now just a memory; only returning to his mind when it forcefully reappears.

Henry Frankenstein, as Victor in the text, is the eternal little boy, obsessing over one new interest to the next, and abandoning each once it serves its purpose or loses his attention.

This brings us to the monster; the abandoned interest.

What can I say about Karloff’s beautiful portrayal that hasn’t been said before, and by infinitely more articulate people? I’ll give it a shot.

Upon the monster’s first proper appearance in the film, Henry has the monster look up to the heavens as light shines down on his face. As he reaches upwards, Henry has the light taken away. Slowly, and carefully, the monster lowers his hands, holding them out to his creator, whose desperate avoidance to being touched is palpable. The monster looks to the warmth and light of the sun, something natural and life-giving. But it’s taken from him in an instant, and he can only try to receive such warmth from his own life-giver. Henry’s reaction is awful, because his isn’t one of a life-giver, or parent. It’s cold. It’s detached.

Much has been said of the Frankenstein monster’s queer identity, and much has been speculated about James Whale’s own experience as a gay man permeating into the construction of the monster. However, one of Whale’s companions, David Lewis, once stated that Whale’s sexuality wasn’t key to his filmmaking, and his biographer has rejected notions that Whale saw himself in the monster from such a perspective.

And yet, despite knowing that, it’s difficult not to see something of that perspective in the monster. The United Kingdom’s history of LGBT treatment is grim. Section 28 alone marks a deeply cruel and hateful methodology to ostracise people on the basis of their sexuality. This is to say nothing of the aggressively unsympathetic public perception of transgender people. Key to the morality that informed Section 28 was a particularly repugnant belief that gay people posed a threat to children. Traces of that can be read into Frankenstein. One of the film’s most significant moments is when the monster comes across the little girl, Maria, playing near a lake.

Yet to be influenced by prejudice and distrust, Maria quickly invites the monster to play with her. She hasn’t been taught to fear, and to hate. The image of her holding Karloff’s hand is enough to draw tears, but it is what follows that breaks the heart. After observing Maria throw flowers into the water, the monster misjudges the game and throws Maria in too. Unlike the flowers, she does not float. The monster’s realisation of his action is quick and cutting. He frantically looks about, clearly conscious of the dreadful mistake he’s made.

The death of the child and its weaponisation to fuel hate of the monster realises the queer link. The monster isn’t a threat to children. Maria’s death is not intentional, and the monster’s reaction in the immediate aftermath conveys this. But this context is unimportant to the townsfolk, and it is his alleged threat to children that means that he must be destroyed. Already hated by his creator, a terrible accident with Maria seals his fate, to be hated by all.

A further reading of the character relates to the state of an outwardly liberal, inwardly illiberal society. As corporations fall over themselves to declare their support for the LGBT community during Pride month, questions have been raised as to how far such support is genuinely meaningful. With a couple recently violently assaulted because of their sexuality, it isn’t unreasonable to question how far societal acceptance actually carries. Henry Frankenstein labours over his creation with an earnest devotion, just as corporations online adorn themselves with temporary Pride flag avatars. Once the monster is autonomous, Henry is repulsed and detached from the creature. As soon as LGBT and gender non-conforming people dare to openly exist beyond the logos and banners, hate rears its head and words ring hollow. Their existence, independent of its validation of performative liberal values, is unfamiliar and frightening. The monster’s autonomy, independent of Frankenstein’s scientific prowess, is uncanny and dangerous.

There’s also something to be said of the oppressed becoming so subjugated that their understandably explosive reaction is seen as justification for the oppressor’s ideology. The monster is treated as Other almost instantly. Henry’s admiration for its existence is short-lived as he soon tolerates Fritz’s near-constant torment of the monster. He is treated as monstrous long before he’s done anything that could reasonably identify him as such. Almost every monstrous action he commits comes as a reaction to the cruelty inflicted upon him. The monster hangs Fritz, in retaliation to Fritz whipping and beating him. The monster kills Dr. Waldman, reacting to Waldman trying to dismember him. The monster menaces Elizabeth, just as Henry had menaced him.

Parallels to our current cultural climate can be found in the ways in which we react to those who are more direct with their struggle for unconditional acceptance. When the recognition of someone’s personhood is repeatedly considered up for (allegedly civilised) debate, is it really unreasonable for those whose lives are in question to feel betrayal, or even anger? People whom we have already demonised are expected to politely argue for their right to exist without scrutiny. But if they become rightly angered, their argument is considered forfeit – as is our acceptance of them.

The monster never had the chance at civilised debate to begin with, so its acts of aggression after cruel torment are even further divorced from context by the protagonists. The monster, reacting to how he is treated, is punished for self-assertion.

I appreciate that the cynicism with which I’ve approached Frankenstein‘s subtext may appear overtly political to some, but that we politicise and deny the existence of people is a travesty. Karloff’s monster teaches us so much about empathy; to look beyond what we see to the humanity that sometimes evades an initial glance. Karloff’s monster is a person, desperate to be accepted as such.

For all its liberties with the text, James Whale and Boris Karloff strike to the core of Shelley’s story. Karloff’s performance speaks to the injustice of abandonment. What we see in the monster is up to us as individuals, but Karloff portrays The Other so effectively that it is difficult not to question our own hesitation to accept people based on as little as their image. Karloff’s creature has a soul and a strong sense of humanity that sits at odds with the constructed idea of humanity that Henry and the other characters cling to.

It’s highly presumptuous of me to speak on behalf of LGBT people, and I do not argue that my readings of Frankenstein are infallible, total, or correct. These have been my thoughts on Frankenstein.