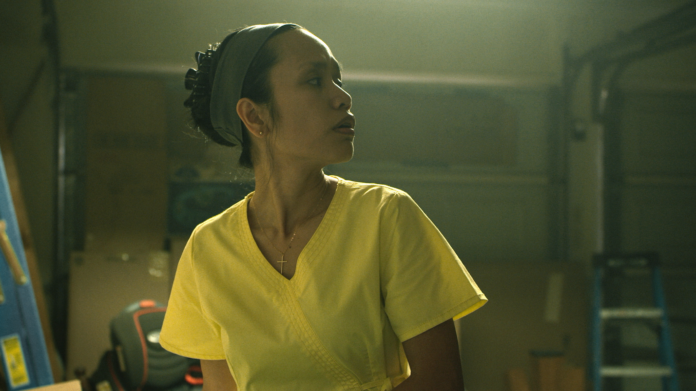 Sanzaru is a terrific and unsettling watch. The ideas it plays with – of family trauma, repressed memories, and how they seep into the very texture of material life – lay the groundwork for the film’s big triumph: its visual renditions. Sanzaru visualises abstract ideas of spirits, ghosts, and netherworlds in a striking – and haunting – manner. Our Culture reviews the film here as part of its selection in the 2020 Fantasia International Film Festival.

Evelyn (Aina Dumlao), a Filipino nurse, cares for Dina (Jayne Taini), the matriarch of the Regan family. Dina’s aloof son, Clem (Justin Arnold), lives outside her home in a trailer, and takes little interest in her care. Evelyn’s nephew, Amos (Jon Viktor Corpuz), is staying with her, and traces of familial frustration abound in tense interactions between them. As Dina’s health deteriorates, Evelyn begins hearing her talking in the night to someone who isn’t there. As Evelyn struggles to navigate Dina’s downturn and the enigma that is Clem, something enters the house. Repressed layers of violence seep from the house’s seams. Something lies in Evelyn’s past, and something else in the Regans’ history. Whether or not these things can be resolved will determine the power Mr. Sanzaru holds…

You may be asking yourself, “who or what is ‘Mr. Sanzaru’?”

According to director Xia Magnus, “in Japanese, ‘Sanzaru’ means the ‘Three Wise Monkeys’, who see no evil, hear no evil, and speak no evil. The monkeys can symbolize balance, in the Buddhist sense of not dwelling on evil thoughts, but they can also signify imbalance, from the denial of unwanted truths.” In the film, Mr. Sanzaru plays both an abstract and a literal role. He is a spirit whose appearance strikes to the heart of the philosophical side of “unwanted truths”, but also to a very real past sin which stalks the history of the Regan family.

This is a film about families, their shared memories, and the unsavoury parts of our histories that fester when left unresolved. There is a clash of cultures at play here. Evelyn hails from a dynamic wherein family is important; we see this in the many phone conversations she has with her sister, and importantly in the personal notes she relates to Dina. At the same time, Evelyn is also separated from her family; those ties really only remain with her and Amos now. Meanwhile, Dina lives in an environment where family is present, but “family” the noun, and family the emotion, are clearly two different things. Opposing values are present from the beginning, and they ultimately define the film’s approach to trauma.

Sanzaru manages to be horrifying and hopeful because it presents two conclusions to trauma. One is destructive, the other is redemptive. The film gives us a lifeline for how repressed memories need not destroy us if we can acknowledge and resolve them; but it also shows us the terror of what happens when the sins of the past are actively buried. This double approach – with both a positive and a negative side – can be found in most of the film’s threads; be it in the presentation of the supernatural, the material reality of addressing or repressing memories, and in the people themselves. Nobody in this film is one-dimensional – for better and worse.

The film’s major triumph is its visualisation of Mr. Sanzaru. It is almost impossible to describe why the simple rendition of the film’s ghost scared this critic to the extent that it did, though it might be something to do with how it realises the film’s themes. Without giving away too much detail, Mr. Sanzaru looks like the crude shape of a man in a single colour: red. He moves about with an uncertain flow; he is both there in the room and incorporeal. He is terrifying in the simplicity of his appearance, yet describing why that simplicity is so horrifying leaves me uneasy. This is not like the spirits in Poltergeist (1982) or The Amityville Horror (1979), which draw from the visually monstrous for their ghouls. Mr. Sanzaru is something all the more intangible, which is exactly why he visualises the kind of trauma the film explores so well. Describing trauma of any kind is difficult. Words fall short of the immense turmoil that comes when we relive events tinged with extreme emotion. I cannot describe that which makes Mr. Sanzaru’s appearance so horrifying in the same way that describing the death of a loved one is almost impossible. So, when he does make his appearances, Mr. Sanzaru conjures a dread that matches the indescribable nature of trauma.

Sanzaru is a film which balances its terror with the hope that past sins can be acknowledged and overcome. In its way, the film is also about choice; to confront or to bury. How we eventually use or discard the message of the film is up to us.

Fantasia 2020 Review: Sanzaru (2020)Sanzaru is a film which balances its terror with the hope that past sins can be acknowledged and overcome. In its way, the film is also about choice. How we eventually use or discard the message of the film is up to us.