Perfume Genius has announced Immediately Remixes, a new album featuring reimagined versions of each track from last year’s Set My Heart on Fire Immediately by different artists. The collection arrives February 19 via Matador and includes remixes by A. G. Cook, Jenny Hval, Boy Harsher, Nídia, Danny L Harle, Actress, Katie Dey, and more. Today, Perfume Genius has also shared the first remix from the record, a reworking of ‘Your Body Changes Everything’ by Boy Harsher. Check it out below, alongside a video directed by vocalist Jae Matthews and Caitlin Driscoll and starring trans activist and model Teddy Quinlivan.

“I’m very honored to have all these incredible musicians rework these songs,” Perfume Genius’ Mike Hadreas said in a statement. “I felt personally remixed listening to their versions, hearing the spirit of my song completely transformed was very magical. Each one feels like a little portal to a fucked up shared world.”

On making the video for ‘Your Body Changes Everything (Boy Harsher Remix)’, Jae Matthews had this to say:

For the video, I wanted to create something that reflected my feelings of disconnect. Summer during COVID was complex—everyone was locked down, but so desperately wanted out. Screens and distance became the norm for casual interaction. Inspired by David Cronenberg’s Videodrome (1983) and Tobe Hooper’s Poltergeist (1982), I developed this idea where a man becomes haunted by a beautiful alien—who can only access him through his television set. Long live the new flesh! Luckily, Teddy Quinlivan was eager to participate from the very start and was a perfect cast for the flawless extraterrestrial. The desire within the video—the man wanting this cosmic babe so bad—matches the tone of the remix, especially during the sequences where she asks, “Can you feel my love?” through the static on the TV.

Check out where Set My Heart on Fire Immediately landed on our 50 Best Albums of 2020 list. 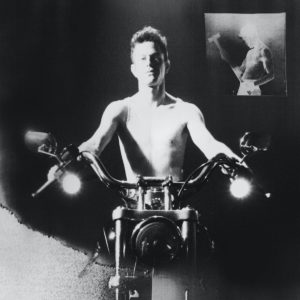