Pasadena-based singer-songwriter Charlie Hickey has shared a new song featuring Phoebe Bridgers titled ‘Ten Feet Tall’. Bridgers sings backing vocals on the track, which appears on Hickey’s upcoming EP Count the Stairs and arrives with an accompanying video directed by Zoe Donahoe and Adam Sputh. Check it out below, and scroll down for the EP’s cover artwork and tracklist.

Count the Stairs, which is out February 26, was co-written, produced, mixed, and engineered by Bridgers’ bandmate and collaborator Marshall Vore. “‘Ten Feet Tall’ is sort of a different animal than any other song I’ve written,” Hickey explained in a statement. “I was going to school at the time and was feeling quite alienated in this little world where everybody was instantly partying with their brand-new best friends and fun came so naturally. I found solace in Marshall’s studio on the weekends. This was our first proper attempt at writing together and we were writing something really horrible. We were both kind of delirious and Marshall started singing the verse melody for the song as a joke, making fun of what we had been trying to write. But when I heard it, I said to him, ‘Wait, that’s the song that we’ve been trying to write.’”

“After that, we wrote the rest that night and recorded it the next day,” Hickey added. “We re-recorded it a few times before going back to what we did that day. I’ve never written or recorded a song like that since, and we weren’t sure it was even gonna come out but when I hear it back, it really serves as a time capsule of a very confusing/depressing but also very fruitful and fun time in my life!” 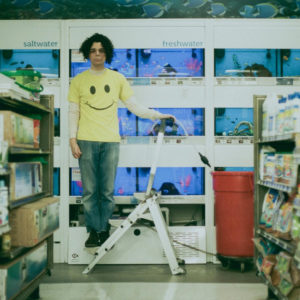