Tune-Yards have announced their next album: sketchy. comes out on March 26 via 4AD. Accompanying the announcement, Merrill Garbus and Nate Brenner have also shared a new single titled ‘hold yourself.’, which comes with an animated video courtesy of Basa Studio. Check it out below, and scroll down for the LP’s cover artwork and tracklist.

“This song is about feeling really betrayed, by my parents’ generation, and at the same time, really seeing how we are betraying the future,” Garbus said of ‘hold yourself.’ in a statement.

Inspired by the Beastie Boys Book and Questlove’s Creative Quest, sketchy. follows Tune-Yards’ 2018 album I Can Feel You Creep Into My Private Life. and includes the previously released single ‘nowhere, man.’. Garbus and Brenner began jamming every day in their home rehearsal studio “like athletes,” as Garbus puts it in a press release. “I started remembering that people come to us to be entertained, to move, to feel joy,” she adds. “And together, I think, we can wake up.” 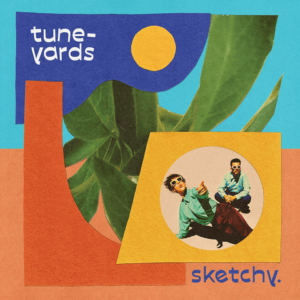