Kele Okereke has announced his fifth solo album. The Bloc Party frontman’s latest is called The Waves Pt. 1 and it arrives on May 28 via his own imprint KOLA Records and !K7. The LP was written and recorded during lockdown and produced entirely by Kele as he saw his other projects be cancelled or postponed due to COVID-19. Below, listen to the new single – a cover of Bronski Beat’s ‘Smalltown Boy’ – and check out the album art and tracklist.

“Usually when I make records it’s an ensemble affair, there are usually lots of other musicians and singers I work with, but as we were in lockdown I did not have that luxury of being able to work with other musicians,” Kele stated in a press release. “I knew I had to fill in the space of this record entirely by myself, which was daunting but also very liberating. This album is literally the sound of me.”

The Waves Pt. 1 follows Kele’s 2019 LP 2042.  “The initial plan was that the record was going to be solely instrumental, after 2042 I knew that I wanted a break from writing words,” he added. “Although making that record had been rewarding it had also at times been quite traumatic for me, as I was forced to examine a lot of my own personal fears and anxieties about race relations in this country and the US. I made ‘2042’ in 2019, so when those same discussions about race came into sharp focus after the death of George Floyd in 2020 I personally felt that I needed a break from the heaviness, I knew that whatever I did next musically would need to cleanse me.”

He continued, “Slowly I started adding words and vocal melodies to the ideas and I could see songs starting to take shape but it was important to me that the music felt fluid, that it drifted in out like the bobbing of waves, that if you let yourself succumb to it maybe it could take you somewhere else, somewhere far away from here.” 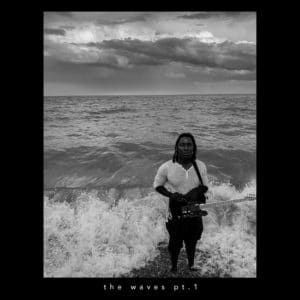 The Waves Pt. 1 Tracklist:
1. Message From The Spirit World
2. They Didn’t See It Coming
3. The Way We Live Now
4. How To Beat The Lie Detector
5. Dungeness
6.  Ninevah
7. The One Who Held You Up
8. The Patriots
9. Intention
10. Smalltown Boy
11. From A Place Of Love
12. The Heart Of The Wave
13. Cradle You (Bonus Track)
Share
Facebook
Twitter
Pinterest
Linkedin