IDER have announced their sophomore album. The follow-up to 2019’s Emotional Education is called shame and it’s due out later this year. The duo of Megan Markwick and Lily Somerville have also previewed the album with the new single ‘Cross Yourself’, which features additional production from Salka Valsdóttir (Daughters of Reykjavík, CYBER). Check it out below and scroll down for the LP’s cover art and tracklist.

“‘Cross Yourself’ is a reflection on how we search for purpose – how we often attach meaning to things or like the idea of something external to believe in, in exchange for believing in ourselves,” IDER explained in a statement.

No longer signed to former label Glassnote, the duo moved to Berlin with plans of writing their second album. “We got there, and we got COVID four weeks later,” they said. “We had three weeks of heaven where we wrote so much new music and it was everything we dreamed of, living that chaotic, no-routine lifestyle. We Thelma and Louised it back, because the messaging at the time was “if you don’t come back to London now, you never will.”” 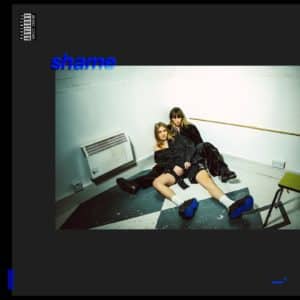