The Mountain Goats have announced a new album: Dark in Here is out June 25 via Merge. The album was recorded the week between their most recent LPs, 2020’s Getting Into Knives and Songs for Pierre Chuvin, at FAME Studios in Muscle Shoals, Alabama. It’s led by the single ‘Mobile’, which features Muscle Shoals session players Spooner Oldham on electric piano and Will McFarlane on lead guitar. Check it out below and scroll down for the album’s cover artwork and tracklist.

“One of my quarantine projects after getting home was going back to Moby Dick and actually finishing it for once, and I was amused to encounter early on the retelling of the story of Jonah,” Mountain Goats bassist Peter Hughes said of the new song in a statement. “If Melville gives it to us as a fiery 19th century New Bedford sermon, what “Mobile” offers might be understood as Father Mapple’s modern-day Gulf Coast flip side, the breeziness of McFarlane’s electric guitar and Matt Douglas’ accordion belying its protagonist’s guilty conscience.” 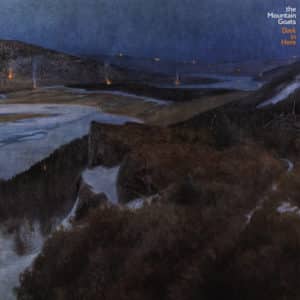 1. Parisian Enclave
2. The Destruction of the Kola Superdeep Borehole Tower
3. Mobile
4. Dark in Here
5. Lizard Suit
6. When a Powerful Animal Comes
7. To The Headless Horseman
8. The New Hydra Collection
9. The Slow Parts on Death Metal Albums
10. Before I Got There
11. Arguing With the Ghost of Peter Laughner About His Coney Island Baby Review
12. Let Me Bathe in Demonic Light