Kings of Convenience, the Norwegian folk duo of Erlend Øye and Eirik Glambek Bøe, have announced their first album in 12 years. Peace or Love, the group’s fourth studio album and first since 2009’s Declaration of Dependence, is out June 18 via EMI. Along with the announcement, they’ve also shared a new song called ‘Rocky Trail’. Check out a Détour-directed video for the song below and scroll down for the LP’s cover artwork and tracklist.

“Another classic Eirik composition that skilfully ignores the verse-chorus-verse blueprint,” Øye said of the new song in a statement. “It’s pop music, but not as we know it.”

Peace or Love was recorded across five years in five different cities, including Gothenburg, Sweden, Santiago, Chile, and Berlin at Nils Frahm’s Funkhaus studio. According to a press release, the album “is the sound of two old friends exploring the latest phase of their lives together and finding new ways to capture that elusive magic” and features “11 songs about life and love with the alluring beauty, purity, and emotional clarity that you would expect from Kings of Convenience.”

Kings of Convenience have also announced a European and UK tour in support of the album, set to take place this fall into early 2022. Find the full list of dates at the band’s website. 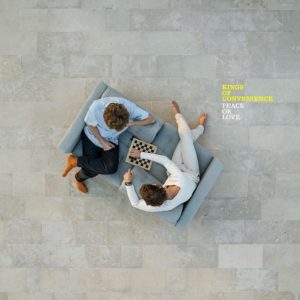