Descendents have announced a new full-length album called 9th & Walnut, which arrives on July 23 via Epitaph. The pioneering California punk band’s original four-piece lineup – vocalist Milo Aukerman, bassist Tony Lombardo, guitarist Frank Navetta, and drummer Bill Stevenson – started working on the record in 2002, but had not completed it by the time of Navetta’s death in 2008. After abandoning the project, they picked it up again and finished it during lockdown, as they explain in a new interview with Rolling Stone. Check out the new single ‘Baby Doncha Know’ below.

9th & Walnut is named after the band’s old Long Beach practice space. The 18-track LP features some of Descendents’ earliest material written from 1977 through 1980, including previously unreleased recordings of their debut tracks ‘Ride the Wild’ and ‘It’s a Hectic World’ with Aukerman on vocals, as well as a cover of Dave Clark Five’s ‘Glad All Over’.

“Baby Doncha Know’ was maybe the 5th song we learned,” Stevenson recalled in a press release. “We would go out to 9th & Walnut every weekend and practice all day. I mainly just remember being in awe of how ‘a kid my age, who goes to my high school’ could have written all these cool songs. Frank seemed to have a maturity beyond his years. I never asked him who or what it was about. I was just happy to be there with him and Tony.” 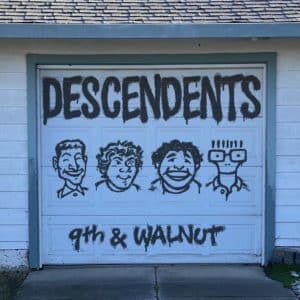