Beach Fossils have announced The Other Side of Life: Piano Ballads, a collection of jazz reimaginings of songs from across their catalogue. It arrives on November 19 via Bayonet, and the band have previewed it with a piano version of ‘This Year’, which originally appeared on 2017’s Somersault. Check it out and find the album’s cover artwork and tracklist below.

The Other Side of Life was made in collaboration with Tommy Gardner, who played in Beach Fossils from 2011 to 2016 before moving to China. “I was astounded by the amount of musical talent that he possessed,” frontman Dustin Payseur said in a statement. “On tour, whenever we were in a green room with a piano, Gardner would sit down and start improvising Beach Fossils songs in a jazzy style. He would be playing the melodies for the guitars, bass and vocals all together. It’s not like he rehearsed it, it would be the first time he’d ever attempted to play these songs, and it was always beautiful. For years I had the idea of turning these piano versions of Beach Fossils songs into an album, and in 2020 when touring came to a sudden halt due to Covid, I reached out to Gardner and asked if he wanted to finally make this album.”

Payseur added: “There’s always been an element of jazz in Beach Fossils; chords are rarely played, instead the instruments typically play single-notes that come together to create chords. I think a lot of that comes from listening to jazz trios and quartets, hearing the way that the instruments weave in and out of each other, leaving space for each other, instruments coming up front for a bit while others wait.”

The Other Side of Life Cover Artwork: 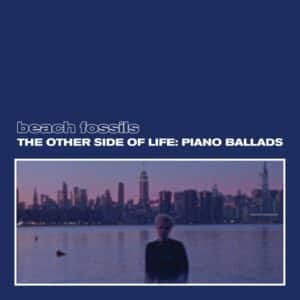 The Other Side of Life Tracklist: