Mad Cool Festival have added 32 more artists to their 2022 lineup, including Florence + the Machine, Queens of the Stone Age, and HAIM. The likes of Arlo Parks, CHVRCHES, Sam Fender, Glass Animals, Yves Tumour, Animal Collective, and Four Tet have also joined the bill. In addition, the Madrid event has announced it is adding one additional day to the festival, which will run from July 6-10 next year.

Previously, Mad Cool Festival announced that the likes of Metallica, The Killers, and Muse would lead its 2022 edition, with Carly Rae Jepsen, Wolf Alice, Foals,  St. Vincent, Phoebe Bridgers, and more also set to perform. According to a press release, “a few final additions” to the lineup will be revealed soon. 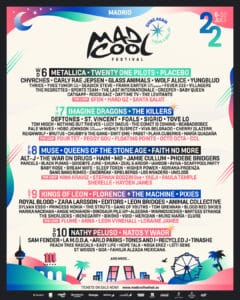