Anxious have announced their debut album, Little Green House, which is due out January 21 via Run For Cover Records. The Connecticut-based band recorded the album with Chris Teti of The World Is a Beautiful Place And I Am No Longer Afraid to Die at Silver Bullet Studios. Today’s announcement comes with the release of the new single ‘In April’, which is accompanied by a Chris Tharp-directed video. Check it out and find the album’s cover art and tracklist below.

“I think a lot of the record is a coming-to-terms, interpretive record about relationships with people and thinking introspectively,” vocalist Grady Allen said in a statement about Little Green House. “I’m sure it’ll be a cliché very soon to say, ‘With all the time spent away, I was able to really think about things,’ but having that time to sit and be introspective really does give you perspective on yourself, the relationships you have with other people, and that recognition that while you might all be interconnected—whether it’s your parents, your friends from high school, people you know through music—it’s bound to happen that you all have deeply individual and separate paths, and that’s okay.” 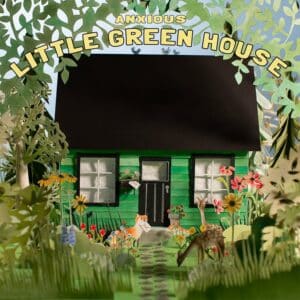