Arca has announced a new album, sharing a video for the new song ‘Electra Rex’. Like the previously announced KICK ii, KicK iii will be released on December 3 via XL. The video for ‘Electra Rex’, directed by Carlota Guerrero, shows Arca and her friends performing in front of the Plaça dels Àngels ​​in Barcelona. Check it out below, along with the album artwork (by Frederik Heyman) and tracklist.

Talking about the new single, Arca said in a statement:

For me KicK iii is the most incendiary entry in the kick universe. The album is a portal directly into the more manic, violently euphoric and aggressively psychedelic sound palettes in the series. Electra Rex is a new archetype I propose in reference to commonly understood ideas of Freud regarding the oedipal complex—Oedipus Rex kills the father and unknowingly making love to the mother. Electra complex posits the binary opposite: killing the mother and unknowingly making love to the father.   And so I am the first to propose a nonbinary psychosexual narrative to avoid falling into the same generational tragic blind spots. Electra Rex, a merging of both names, an integration of both Oedipus Rex and Electra: Electra Rex it kills both parents and has sex with itself, and chooses to live.

After announcing KICK ii last month, Arca shared a visual for the tracks ‘Prada’ and ‘Rakata’. KicK iii will feature her September single ‘Incendio’. Both albums will follow last year’s KiCk i. 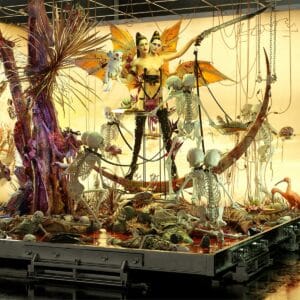