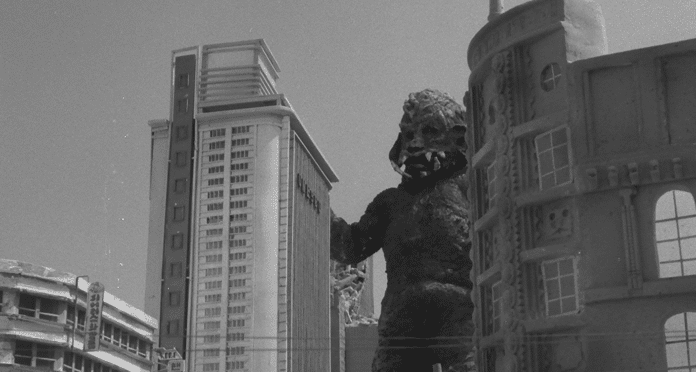 In this film, a child crawls into a giant monster’s head and urinates. Welcome to Space Monster Wangmagwi!

Seldom seen outside South Korea, SRS Cinema brings 1967’s Space Monster Wangmagwi to Fantasia 2022 ahead of its blu-ray release slated for later this year. While not a great film by any stretch, there’s a certain delight in how preposterous and deliberately silly it is. Our Culture reviews the film here as part of its selection from this year’s Fantasia International Film Festival.

Silver-suited aliens in weird helmets orbit our planet and deploy a giant monster over South Korea. Our alien visitors plan to wipe out humanity using their bizarre creature and then colonise Earth. The titular Wangmagwi wastes no time in trashing Seoul but quickly takes a liking to a young bride-to-be, clutching her in its claws as it marches on.

Before going in, it’d help to know that Space Monster Wangmagwi is a comedy. If you’re expecting a straight-faced giant monster film, you may be disappointed. The film’s structure may not be what you’re expecting, either. The movie begins with the aforementioned bride on the eve of her big day just as her fighter-pilot fiancé is called back to base. We follow her story right up until she’s snatched up by the monster, and then the film quickly becomes a series of skits. Different characters pop up to act out zany bits, vaguely connected by the rampaging Wangmagwi.

Some of these vignettes are funnier than others, and your mileage may vary. The first sees a pair of guys betting one another over who can stick around the longest before running away. While it prompts a chuckle or two, it overstays its welcome. The next, however, is more entertaining. A young boy wants to fight Wangmagwi and climbs up the monster’s body. He eventually reaches its gigantic ear and proceeds to burst its eardrum before crawling into its head. And here, dear reader, is where we see a boy urinating inside a giant monster’s head. Ah, the cinema!

The film’s special effects are not very good. It’s a shame because there’s a handful of really great shots in which the miniature Seoul looks terrific, complemented by some creative camera work. Wangmagwi itself looks okay but certainly less polished than South Korea’s other 1967 monster, Yongary from Yongary, Monster from the Deep. Nevertheless, the consistent framing of Wangmagwi with extremely low angles is very engaging. What really lets it all down is the sound design. Scenes of urban carnage are undermined because it sounds like a few rocks tumbling over – in turn making the miniatures seem as small as they really are.

The hit-and-miss comedy, lack of clear structure, and almost non-existent characters make the film a bit of slog. It certainly feels longer than it is, but I’m glad I’ve seen it. And that’s the thing, really. It’s great that this film is getting a wider release on blu-ray. Even though internet claims that this was a “lost” film were erroneous, it’s nevertheless true that it hasn’t been seen in the West save for a few clips and images. It’s wonderful to have another piece of giant monster cinema become available, irrespective of its shortcomings.

While not a good film, Space Monster Wangmagwi has its moments of weird delight. Its appeal may be elusive for most, but I’m glad it’s getting its moment in the sun.