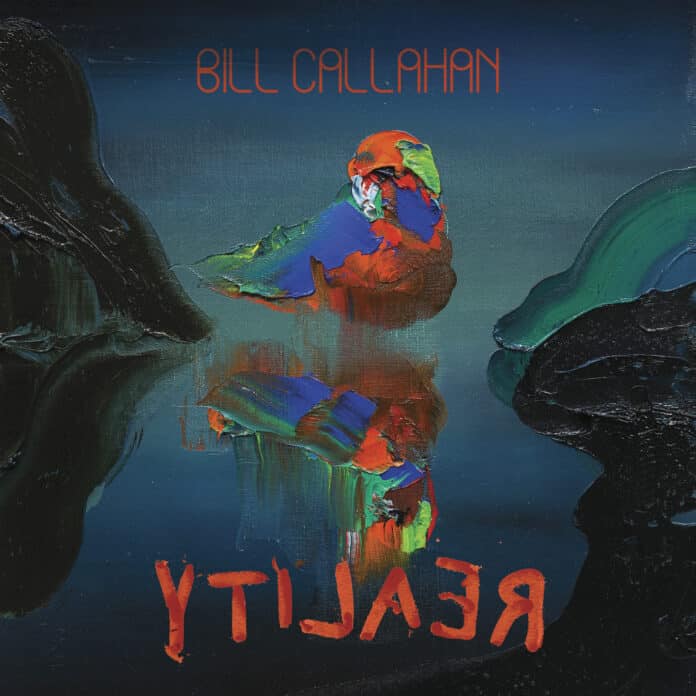 When people positively describe music as dreamlike, the implication is that it sounds hypnotic without feeling soporific, elusive yet strangely engaging. But we forget that the most memorable and stimulating part about dreams isn’t being immersed in so much as waking up from one, the dizzy thrill of trying to piece the puzzle together in a kind of rushed, limbo state. Bill Callahan’s vast discography reveals a long-standing fascination with dreams, but on his new record, YTI⅃AƎЯ, his goal was to “rouse people” in a climate that endlessly feeds on disassociation and hostility. And while his music has remained incisive and compelling even as its tone has shifted, with 2019’s Shepherd in a Sheepskin Vest marking a turning point towards more open-hearted lyricism, this is indeed his most beautifully stirring record in a while, like looking out the window on a beautiful morning as you try to shake off the sweet, unnerving aftertaste of sleep.

On YTI⅃AƎЯ‘s opening track, Callahan circles through the lines, “And we’re coming out of dreams/ As we’re coming back to dreams,” which encapsulate the flow of the album. The songs are exquisitely yet intuitively sequenced, with surreal and playfully imaginative songs leading into ones that are more grounded in everyday detail. The second track, ‘Everyway’, occupies a kind of fantastical space, depicting a group of sailors who “warmed our hands in the corpse of a wild horse on the shores of Assateague.” One of them is haunted by the feeling of “something coming on/ a disease or a song,” the distinction almost insignificant, as ghostly backing vocals and washes of guitar echo in the distance. By contrast, there’s something refreshingly perky and organic about the following ‘Bowevil’, whose raw groove, propelled by two acoustic guitars, is underpinned by subtle instrumental flourishes evoking an earthy quality that overrides the song’s ambiguous nature.

No song clearly fits into a single category; they lean in different directions, but there’s a spark of lucid wisdom and otherworldly beauty to each track. The lovely ‘Coyotes’ begins by focusing on an aging dog who dreams of being a coyote, but Callahan seems to transpose the fear of being preyed on into a human context: “I tried to signal you of danger/ But my voice had not yet come through/ You were bent over, a peanut of a child,” he sings, as the track grows into a confessional. ‘Lily’ works sort of the opposite way: it’s a piercingly heartfelt song that addresses Callahan’s relationship with his mother in the final stages of her life, but its power lies in finding the right metaphorical language for wordless emotional exchanges (“Eyes turned to ice when pulse was slowed/ Ice turned to tears when we drew close.”) The only person who speaks is outside the family, a medium who assures the narrator the spirit of his mother is watching over his child. The musings of ‘Coyotes’ then take on a new resonance: “I wanted to tell you/ We tend to stick together/ Down through the generations.”

A sense of collectivism pervades the album in ways that are sometimes jubilant and often eerie. It’s no coincidence that ‘Lily’ is followed by ‘Naked Souls’, an unsettling highlight that seems to react directly to the vulnerability that’s just been displayed: Though the song is gentle at first, its jazz inflections hint at one man’s discomfort with the transparency of the human condition, and suddenly there’s a whole army of voices calling for the destruction of “these naked souls.” The instrumentation, too, is crowded and boisterous, with Jim White’s fluid drumming, Matt Kinsey’s manic guitar, Mike St. Clair’s scorching trumpet, and Carl Smith’s airy clarinet playing to the delirium. Mike St. Clair contributes to just one more track, ‘Natural Information’, which happens to be the other song that takes more of a bird’s eye view of society. This one’s more funny, jaunty, maybe hopeful: When he describes “strolling my baby down the street,” you can imagine him coming up with the melody right then and there; Callahan’s son, Bass, can even be heard humming the chorus.

It’s uplifting in ways you wouldn’t expect a Bill Callahan record to be, even if he has long proved himself as more than a purveyor of bleak truths. Yet rousing still feels like the more fitting word: Take the blistering ‘Partition’ and its invocation of “Big pigs in a pile of shit and bones” who “owe more than they’ll ever own,” which stands out on a record where references to horses, bugs, and canines are never quite so brutally real. Though it might be misleading to call YTI⅃AƎЯ a joyful record, the feeling it leaves you with as it breezes by is one of simple contentment, the kind that’s possible when you pay attention to the little things – “the basics of life,” as Callahan puts it – rather than live up to a manufactured image. It’s not an entirely new approach to human connection and survival – it hearkens back to 2013’s Dream River as much as his more recent material. But Callahan makes it feel renewed, like a dream: never quite the same as the last time you saw it, and never as real as the moment you wake up.

Album Review: Bill Callahan, 'YTI⅃AƎЯ'When people positively describe music as dreamlike, the implication is that it sounds hypnotic without feeling soporific, elusive yet strangely engaging. But we forget that the most memorable and stimulating part about dreams isn't being immersed in so much as waking up from one,...