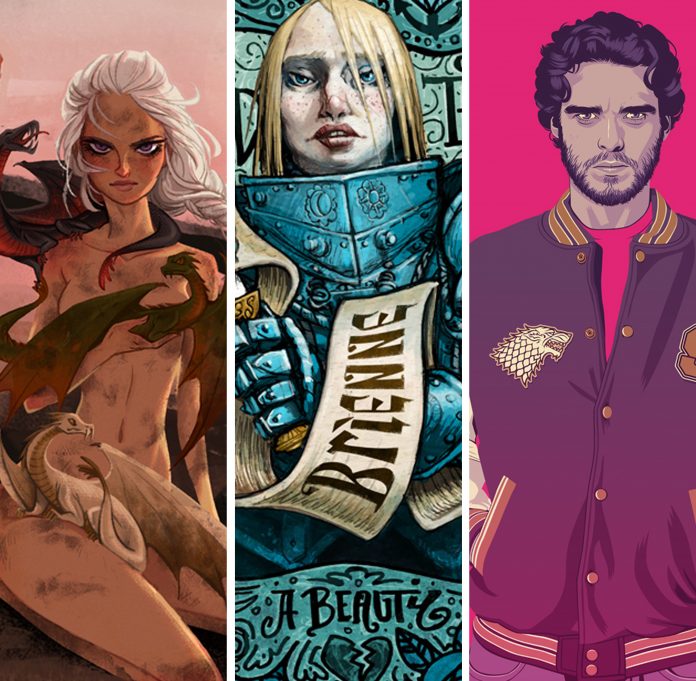 Game of Thrones has been a huge success worldwide with viewership in over 170 countries it has attracted a huge international following. Loved by fans for its great cast, writing, and production value made possible with its huge production budget (spending an average of $10 million per episode for season six) every episode feels like a movie.

The only downside to this is that making such a great show takes a lot of time leaving the fans eagerly waiting for a period of 9-10 months for the new season to air. Giving fans time to speculate on the next season and joining many other fandoms in the culture of fanart. For which they do not disappoint with many artists and enthusiasts joining in and putting their own spin on their favorite GoT characters and storylines there’s so much out there that there’s a little something for everyone.

So we decided to put a short list of must see Game of Thrones fan art to help you wait out the long months before the new season will air.

This is just one of many pieces Mike Wrobel has created based on Game of Thrones. We found his mashup of Got characters and 80’s and 90’s culture to be quite refreshing and fun take on the subject. His works really make you think what if GoT was a set in the 90’s and instead of a fantasy drama between the different Royal houses of Westeros it was based on a rivalry between gangs or sports teams from differents schools.

2. The Maid of Tarth – Rory Phillips

This is a great character piece done in a fun comic style depicting the Brienne of Tarth perfectly. From first glance you can tell that she’s strong but if you look more closely the artist gives us more than just that but also grants an inside into her character by giving detail of her background by depicting the sigil of the House Tarth and a broken heart with ‘a beauty’ written above referencing to her childhood struggles and her romantic past.

3. Arya and the Hound – Matias Bergara Beautiful illustration by Matias Bergara. This is so well done it looks like these two could be a heroic duo from a graphic novel going on adventures and fighting bad guys. The ink and watercolour combination works beautifully creating a lively and nostalgic atmosphere. This is one of many posters created by Robert Ball in a very graphic style based on different Got episodes of the show. What’s really thrilling about this series is how the artist conveys a whole episode in one picture and how atmospheric and well thought out his these posters are. Really recommend having a look at more of his work if you’re interested in storytelling and compositions.

Nicolas has also made more than one piece on Game of Thrones characters. His style seems really cute and fit for children’s books. One of the reasons we decided to choose this image is because there really doesn’t seem to be much fanart of Sam and this is a great depiction of him. Even though it’s quite stylized the facial expression fits his character perfectly and the ravens were a really nice touch in reference to the night’s watch.

This piece stuck out as it had all the little Starks with their dire wolves. We thought that this was a really cute style of illustration and the artist did well to depict each of the characters and their wolves as individuals. Based on the finale of season one this illustration beautifully depicts the turning point in Daenerys character and storyline. The three small dragons and the determined expression while in a setting of burnt wood and ash screams to the viewer that a badass has been born. What’s more is that the style of this illustration seems so appealing that it makes the idea of an animated Got series or a comic seem quite possible and exciting.

8. Game of Thrones Prince and the Hound – Phobs The juxtaposition in this piece between prince Joffrey Baratheon and Sandor Clegane (the Hound) is genius this piece perfectly depicts that you should not judge a book by its cover. The subtle use of the crossbow in reference to the show is brilliant and really conveys the message that while the Prince might seem young and sweet from the first glance his character is really not that kind. While the big, ugly and intimidating Hound is actually of good and kind character, depicted taking care of birds. A truly magical piece by Richey Beckett. This one stood out quite a bit with its rich detail and the way the artist has used the colours and the composition and placement of the crow and the weir wood tree to convey the feeling of the north and symbolism to Bran and his storyline. This was an interesting piece to come across it’s quite decorative and based on the Game of Thrones however not on any of the characters but on a fictional substance within the GoT universe. Wildfire. The artist made few more posters on a similar theme like valyrian steel we think these posters are a great idea and a delightful alternative to the well know Got posters based on the different house sigils.

We hope you loved this little selection of works as much as us and remember there’s much more fanart left out there to find. If you think we should have included any specific piece tweet us at @OurCultureOC .