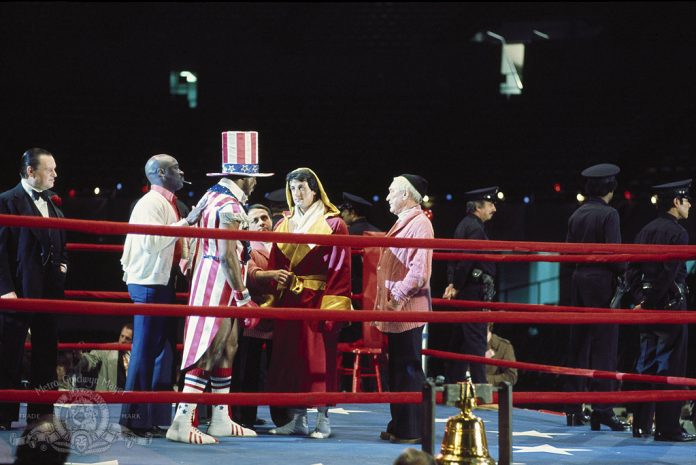 Seen by most as a sports film Rocky (1976) is much more than that. A drama filled film that uncovers the themes of the American dream and struggle, puts us into the world that is still very relevant today.

When the film was initially released on its tiny budget of $1.1 million no one expected it to hit as high as it did. However, it did just that as it went on to make $225 million and furthermore went onto to develop into a franchise which in total at this moment of time has grossed $1.407 billion.

The films success has to come down to many things. Firstly, the story. The elements of the story have quite a few things that really make a film successful these are: love, struggle, dreams, friendship and rivalry. All of these are covered in Rocky which quickly give the film a dynamic range in terms of emotional affect it has on the viewer, meaning the film can move the audience from left to right without boring them and keeping Rocky’s dream of beating Apollo alive more than anything.

Additionally, the music and editing are more technical but equally creative elements that really make the film stand the test of time. These elements combined give the character of Rocky a world which he can live in. Without certain cuts, music scores, wide or close up shots the film wouldn’t stand. For example, the music by Bill Conti is so dramatic and pacey that it drives you into the story and makes you feel the rough times Rocky is going through. It is powerful and warrior-like but at the same time grabs you in with the feel of love and sadness – truly beautiful. Furthermore, the editing by Richard Halsey and Scott Conrad is superb for several reasons. One it doesn’t feel edited which is key in editing, if an audience sees a cut most of the time that is bad editing, in Rocky you don’t get that. It also enhances the emotions of characters as the pacing of the editing transports us into the time and place of the characters and makes us empathise with them. Another key element in Rocky that has become a thing of tradition in Rocky films are the montages. They become associated with the film more than anything, which really gives the Rocky the status of a classic film as it has created something that now is associated with it.

Now, onto the actual acting and story. The film’s main character Rocky played by Sylvester Stallone is a lonely, hard-hitting amateur boxer that does anything to survive. From working for the mafia to fighting amauter boxers he will try anything to get by. His life is hard and its getting even worse, his boxing coach Micky has kicked him out the gym, even though he has been loyal for years. But something comes up, an opportunity to fight the greatest boxer alive the current world champion, the man of the people Apollo Creed. Whilst resisting first, he submits himself into giving it a shot and starts to get trained by Micky who wants him to succeed in the end even though he turned his back on him first. During the time of training he also starts dating the love of his life Adrian, who is a shy at first but full of love. With so many emotions and stories blending in, the film Rocky really stand its ground. Its full of love, raw fight and determination.

To summarise Rocky it is simply beautiful. Moments of grittiness contrast with moments of warmth and love, giving us a film that one would define as a classic.