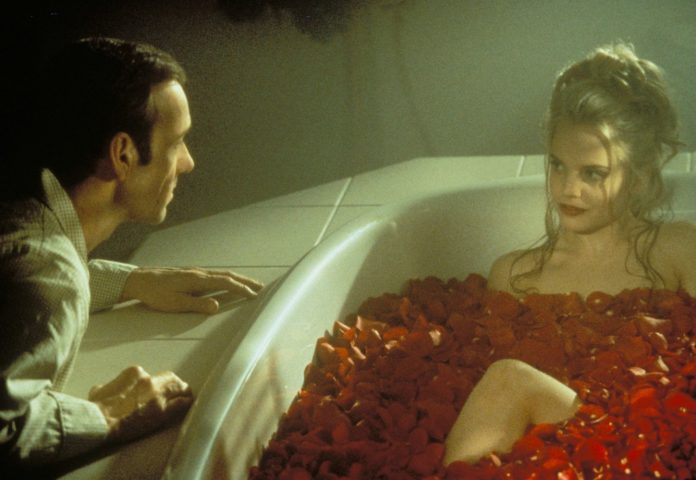 Sam Mendes’ timeless and thought-provoking debut film American Beauty provides a mesmerising exploration into the longing of the American Dream.

American Beauty was released back in 1999, and not even Sam Mendes could have thought that his directorial debut on the big screen would be so successful. Taking home five academy awards and raking in over $356,000,000 worldwide, just how did American Beauty become so successful and revered?

Set in suburban California, American Beauty follows the story of Lester Burnham (Kevin Spacey), an advertising writer and father who has grown weary and hateful to his “stupid little life”. He narrates the opening, and states that “In less than a year, I’ll be dead. And in a way, I’m dead already”. He hates his job, his daughter Jane (Thora Birch) and wife Carolyn (Annette Bening) detest him, he’s sexually frustrated, and he feels as if he has no purpose in such a world. This is until he becomes besotted with his daughter’s friend Angela Hayes (Mena Suvari). He embarks on a mission to impress and sleep with her, as a catalyst for change. Lester forms a bond with his new neighbour, Ricky Fitts (Wes Bentley), who inspires Lester to view the beauty in the world. In a hilarious manner, Lester encounters a mid-life crisis, choosing to set aside all responsibilities and live his life how desires. He quits his job to work at a fast food restaurant, works out, and smokes drugs amongst many new aspects of his lifestyle.

Conrad Hall’s clever cinematography and Naomi Shohan’s superb production design takes us to a world of temptations and fantasies. The symbolism of the colour red throughout the film is used to portray lust and desires that lie within all of the characters. We see that the Burnham’s are living in the only house with a red door, the rose petals when Lester fantasises about Angela amongst other times throughout. As for the others, Jane and Ricky lie on a red set of sheets, Angela applying red lipstick, Carolyn wearing a red dress whilst holding a gun, and Colonel Fitts (Chris Cooper) covered in blood as Lester is shot. The tracking shots, and then close ups held together the intimate moments with Angela in Lester’s fantasies, allows the audience to be transfixed by the flirting and movement taking place within the each of the scenes. Alongside 360 degree shots and dolly shots, the camera movement in Lester’s fantasies are particularly memorable and crucial to an insight into Lester’s mind.

Alan Ball’s tremendous screenplay and characterisation allows the audience to relate to any of the characters to whom they are most applicable to, and to recognise the familiarity of the rest as this could potentially be any old suburban family. This is matched with stellar performances from the cast, particularly that of Bening and Spacey. Bening’s portrayal of the neurotic Carolyn shows true raw emotion of a failing and desperate wannabe that we empathise with yet are infuriated by. Spacey is outstanding as the lead, and provides warmth, authenticity, laughter and pity as Lester. The pair both proceeded to earn two Oscars for their respective roles.

The greatest achievement within this classic, is that American Beauty is both a comedy and a tragedy. We relate to and pity Lester’s failures, as a lot of us live it. We laugh at Lester’s new found happy-go-lucky attitude. We hold both admiration and envy towards Lester, for having the guts to be free of responsibilities, appreciative to be living his life, and ultimately happy to be free from any social pressures. A Lester Burnham exists inside all of us, wanting to break free from the shackles of society and to embrace every moment. It inspires even the most cynical, to “look closer”. Lester’s downfall, although known from the outset, supports this by leaving a bittersweet taste in the mouth of the audience. His tragedy, being that he didn’t sleep with Angela and ultimately died, yet he obtained some of life’s purest moments in his final moments. He had admiration and love for his time with his family, and satisfaction and gratitude, for “every moment of his stupid little life”

Combined with a captivating score, laughter, superb direction and a thought-provoking ending, Mendes’ feature-film debut has to go down as one of the most original films of its time, and as one of the most successful directorial debuts of all time.

Review: American Beauty (1999)Combined with a captivating score, laughter, superb direction and a thought-provoking ending, Mendes’ feature-film debut has to go down as one of the most original films of its time, and as one of the most successful directorial debuts of all time.