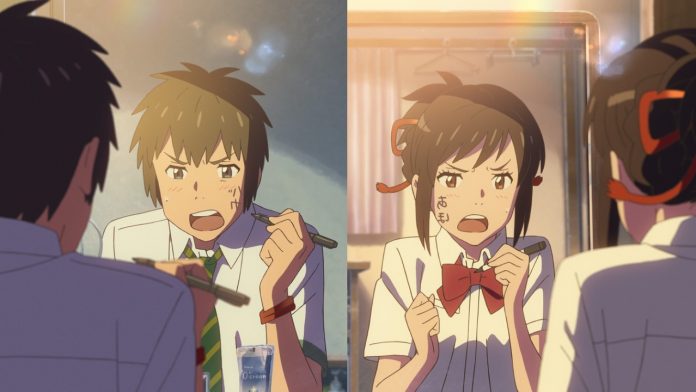 Overtaking Hayao Miyazaki’s Spirited Away as the highest grossing Japanese animated film to date is Makoto Shinkai’s latest film Kimi no Na wa or also known as Your Name, a fun and emotional teen body swap story between a city boy in Tokyo and a country girl in the remote fictional town of Itomori.

Mitsuha (Mone Kamishiraishi) is school girl living in Itomori, a remote town in the Hida mountains, who spends her days going to school and tending to the family shrine. She’s bored and hates living in a small town in the middle of nowhere, exclaiming to the sky to make her a “handsome Tokyo boy in her next life”. Taki (Ryunosuke Kamiki) is a city boy living in Tokyo who spends his time between school, cafes and working at an Italian restaurant, while also struggling to make anything of his crush on his work colleague Okudera (Masami Nagasawa). At some point in time (as the film never makes it clear as to when) Mitsuha and Taki start to body swap on different days every week. At first, they assume the experiences to be dreams but they soon realise the reality of the situation when friends and family speak of how they have been acting strangely recently. The two begin to communicate through messages left in notepads, on their arms and faces and in the phones. While in Mitsuha’s body Taki increases her popularity in school while also experiencing the beauty of the town of Itomori, while when Mitsuha is in Taki’s body she indulges in extravagant food and desserts while getting things going between Taki and Okudera. They learn about each other through these experiences as the film builds up to the event of the comet passing overhead in the night sky.

Officially released in Japan on the 26th August 2016, Kimi no Na wa (which translates to Your Name in English) received heaps of praise as one of the best animated films to ever come out of Japan. Upon the release of the film, Makoto Shinkai has been hailed as the ‘next Miyazaki’. However, this shouldn’t be taken as Shinkai becoming a copy of the famous director as his own style of using gorgeous looking animation shines through in Kimi no Na wa as well as in his previous works such as 5 Centimetres Per Second and The Garden of Words (fun fact: the Italian restaurant Taki works at in the film is called ‘Giardino delle Parole’ which translates to The Garden of Words in Italian, a reference to his previous work).

Visually the film is stunning, so much so that most frames of the film could be taken out and hung up on the wall like a painting, especially in scenes showing the beauty of Itomori. When Taki stares in awe at the lake surrounded by the Hida mountains, the beauty and detail of the scenery allow us to stare in awe with him. It’s not just the scenery in the countryside that holds this amount of detail either; we also experience a different kind of beauty in the bright and lively city of Tokyo, watching the city lights dim as the sun rises between the skyscrapers. However, the most stunning shots in the film can be seen when the comet flies overhead as the night sky is filled with colour. Seeing all of this on the big screen will leave you speechless. This film is visually stunning in more ways than just the scenery though, as can be seen in the animation of the kuchikamizake ritual performed at the shrine by Mitsuha and her younger sister Yotsuha (Kanon Tani), who I should mention is one of the most adored members of the cast for those who have seen the film. There is also a magnificent hand drawn cell animated sequence later in the film which to go into too much detail about would spoil the events of the story.

The music in the film composed by J-rock band Radwimps has been criticized by some for feeling out of place and in some cases ruining scenes, however I think that the pop music suits the themes of the film perfectly as it captured the essence of teenage drama while getting you dancing in your seat when upbeat and close to tearing up in the more emotional moments. The music by Radwimps gives the film life and gives it a unique feeling that makes it stand out from the crowd. It’s different from what we’d usually see in Japanese animated films, but it works. The sound design was also stellar, overall the film looks and sounds great.

In terms of what we come to know about each character, we learn much about Mitsuha and her past while not much is known about Taki’s past, for example the absence of his mother is never explained, but this is not something that really affects the narrative, as much of Taki’s story takes place within the film. While most of the focus is on the two main characters Mitsuha and Taki, the supporting cast is given just enough screen time to still feel relevant, and seeing the interactions between the friends and family of Taki and Mitsuha when they’ve been body swapped is both humorous and entertaining. This isn’t just another teen body swap film either, as what I’ve described so far is only under half of the film’s plot, as the story takes a very unexpected turn after the first third of the film, using the body swap trope in a very unique and interesting way.

The only negatives the film has are very few and can mostly be seen as nit-picking, for example, there are some jokes throughout the film that kind of require a very basic understanding of the Japanese language and culture, so if you’ve seen much Japanese animated films and shows before you’re more likely to understand certain jokes and references, however seeing as this is a Japanese film this can hardly be seen as a fault. There are arguably also some plot holes in regard to the later parts of the film but these are very minor and they don’t distract from the narrative.

To summarise, Makoto Shinkai’s Kimi no Na wa is a blast. Entertaining, emotional and so much fun all the way to the end. The film is full of stunning visuals of beautiful landscapes accompanied by an energetic pop soundtrack that feels very refreshing and unique. I would highly recommend this film to anyone and I also suggest that it is best watched on the big screen to truly appreciate the visual experience this film provides.

Review: Your Name / Kimi no Na wa (2016)To summarise, Makoto Shinkai’s Kimi no Na wa is a blast. Entertaining, emotional and so much fun all the way to the end. The film is full of stunning visuals of beautiful landscapes accompanied by an energetic pop soundtrack that feels very refreshing and unique. I would highly recommend this film to anyone and I also suggest that it is best watched on the big screen to truly appreciate the visual experience this film provides.