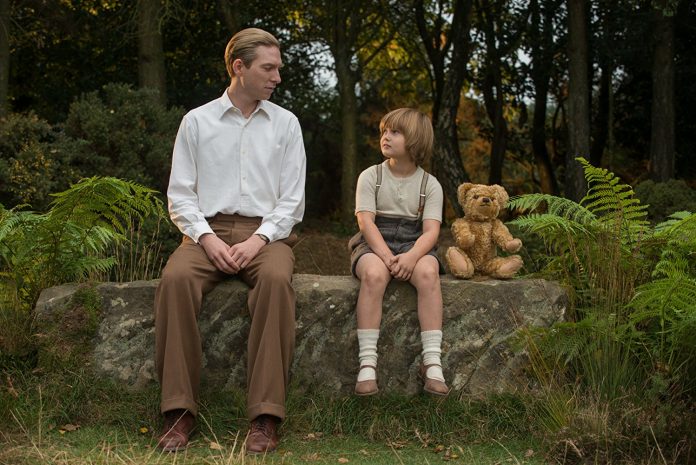 In a world where everyone is plugged into their screens, it’s nice we can still be taught a valuable lesson by a little boy and his bear.

We follow author A.A. Milne (Domhnall Gleeson), referred to most commonly as “Blue”, after he has just survived the first world war and is in the midst of returning to his play-writing career, whilst battling the crippling mental and emotional effects of PTSD. Coming to the conclusion that the war didn’t change anything, Blue decides to move himself, his wife Daphne (Margot Robbie), his young son Billy (Will Tilston) and his maid Olive (Kelly Macdonald) out to the woodland sector of Sussex in order to escape the hustle and bustle of London. What follows is an endearing tale of a father being taught to enjoy life and its simplicities with the help of a small boy and his stuffed animals. With the birth of “Winnie The Pooh” comes the heart-breaking story of a childhood ruined by fame; In the third act, we see a teenage Billy (Alex Lawther) being tortured through his growing years by his classmates, the name “Christopher Robin” forever engrained as a bad memory. His mission to be rid of this reputation leads him to sign up for World War II, his return warming the hearts of the audience and his realisation of a precious childhood inspiring anyone to make sure their children have heard the tales of “Winnie The Pooh”.

The performances in Goodbye Christopher Robin were brilliant, Domhnall Gleeson imbues so much subtle emotion into Blue, we barely see him express any emotion beyond a smile or a slightly raised voice but through all of the scenes in the woods with Will Tilston, a warmth can be felt that could only exist between a father and his son. Margot Robbie’s unsettling mother character is an ingenious antagonist, we’re constantly arguing with ourselves about how we feel about her; her responsibilities are almost always passed off on to Olive and she keeps referring back to how Billy “Nearly killed” her but then we’re reinvigorated with appreciation for her when she actually spends time with Billy, our memories of the ungrateful mother are replaced with kind-hearted smiles for the woman who brought Christopher Robin his Pooh Bear.

On a more personal note, the way that Goodbye Christopher Robin treats its reoccurring themes of PTSD is admirable and accurate. In a “blink and you’ll miss it” moment from the first act, Blue reacts to the popping of champagne and is obviously unnerved by the sound, reminding him of gunfire. Almost instantly, Ernest Shepard (Stephen Campbell) asks if he’s alright and comforts him by saying “I’m the same, when my motorbike backfires”. Blue doesn’t fall to the floor in shock, there are no immediate graphic flashbacks, nothing over the top, simply a man reassuring his friend that he isn’t suffering alone. I believe films like Saving Private Ryan and The Hurt Locker can use graphics and more severe techniques but it’s rare we see the small yet painful moments where the battlefield invades the minds of people at home and Goodbye Christopher Robin does so particularly accurately and has such respect for the people it effects.

It’s rare for me to summarise a film in one word, but I feel like the story, the performances, the visuals, everything about Goodbye Christopher Robin just warmly whispers “Lovely”.

Review: Goodbye Christopher RobinIn a world where everyone is plugged into their screens, it’s nice we can still be taught a valuable lesson by a little boy and his bear. We follow author A.A. Milne (Domhnall Gleeson), referred to most commonly as “Blue”, after he has just survived...