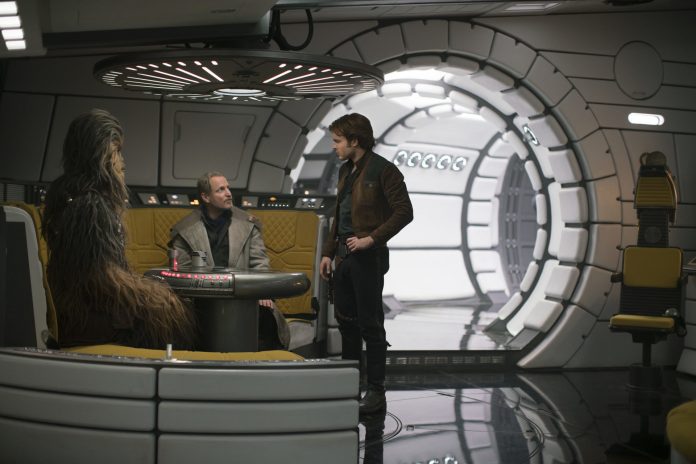 While flawed and mostly predictable, Solo proves to be fun, action-filled adventure that hits all the notes of what you might expect Han Solo’s prequel story might have.

Delving into the backstory of the beloved pilot Han Solo, who until now has been brilliantly portrayed by Harrison Ford, Solo: A Star Wars Story follows Han Solo (Alden Ehrenreich) as he ventures out on a journey across the galaxy with the goal of making enough money so that he can buy his own ship. On his adventures, he’ll come across his eventual co-pilot Chewbacca (Joonas Suotamo) and will meet the original owner of the infamous Millennium Falcon, Lando Calrissian (Donald Glover).

With the original directors of Solo dropping out five months into filming and with Harrison Ford no longer in the driving seat of every fan’s favourite pilot from the Star Wars franchise, fans were right to be worried about what this next Star Wars film might bring to the franchise. Despite these doubts, however, fans will be surprised by just how enjoyable this film has turned out to be. The stakes may be low, but the enjoyment and adventure are there. Ron Howard plays it safe regarding the narrative, mostly sticking to what we already know about Han Solo’s past and then filling in the rest with entertaining action set pieces that hop from one planet to the next. While this will displease some fans and inevitably also makes much of the film predictable, most will be able to sit back and enjoy this fun adventure.

Most of the cast perform admirably in bringing their characters to life, and fans can breathe a sigh of relief when they watch Alden Ehrenreich’s portrayal of a young Han Solo. It’s not perfect (although when living up to Harrison Ford’s performance who really can be), but he does hit the right notes. Han is not the man we meet in A New Hope, Han has yet to have the experiences that have shaped him into the pilot we know and love, but the quirks of his character are there, and it is not hard to believe that this is a young, inexperienced Solo we are watching on screen. Where Ehrenreich mostly shines as Han is in his interactions with his future best friend and co-pilot, Chewbacca, now played by Joonas Suotamo. The pair is a joy to watch from their first ever meeting to the very end of the film. Watching these two become close as the story moves forward is a pleasure to behold, and fans will relish every moment these two share on the screen.

Other noteworthy performances include Woody Harrelson as the criminal Tobias Beckett, who works well as the straight man in the group, regularly trying to stop Han from improvising, as he so loves to do, on each plan. Donald Glover hits all the marks in his portrayal of a young Lando Calrissian; I only would have asked that he get introduced earlier into the story so that we could get more of it. I’d also say the same for his partner in the film, the droid L3-37 who is played by Phoebe Waller-Bridge. Waller-Bridge’s L3-37 was fun to watch but being introduced late in the film leaves us wanting more, whereas Lando doesn’t suffer as badly from this as he is a character we have already come to know in previous films. Paul Bettany does well as Dryden Vos, but the character itself is mostly forgettable. Where the casting goes wrong in the film is with Han’s love interest Qi’ra who is played by Emilia Clarke. Her performance as Qi’ra is incredibly dire, and the connection between her and Han is just not there, it doesn’t click, it’s a struggle to feel anything for this character.

All in all, fans will not be disappointed with this latest instalment in the Star Wars franchise, as while Ron Howard plays it safe, he still takes us on a fun, action-filled adventure. Alden Ehrenreich does as well as someone who isn’t Harrison Ford can do when playing Han Solo, fans will not be disappointed by this casting choice. This film may be flawed and predictable at times, but it is a fun ride nonetheless.

Review: Solo: A Star Wars StoryAll in all, fans will not be disappointed with this latest instalment in the Star Wars franchise, as while Ron Howard plays it safe, he still takes us on a fun, action-filled adventure. Alden Ehrenreich does as well as someone who isn’t Harrison Ford can do when playing Han Solo, fans will not be disappointed by this casting choice. This film may be flawed and predictable at times, but it is a fun ride nonetheless.