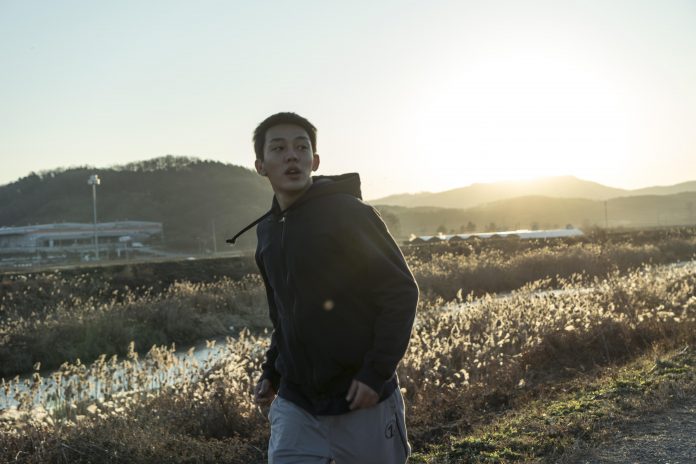 Burning provides a contemporary insight into class division and the consequences of misogyny, in Lee Chang-Dong’s Korean mystery.

Burning premiered at the Cannes Film Festival, marking the directorial return of the great Lee Chang-Dong for the first time since Poetry (2010). Burning is a South Korean mystery drama that follows the story of Jong-soo (Yoo Ah-in), an aspiring writer based on a farm near the Korean border, just outside Seoul. Jong-soo’s mundane lifestyle is flipped upside down, as he falls in love upon reconnection with his old neighbour, Hae-mi (Jun Jong-seo). In time, Jong-Soo and the yuppie, Ben (Steven Yeun), enter a battle for Hae-mi’s affection, though Ben’s mysterious motives don’t appear as romantic as Jong-soo’s.

Ah-in’s almost flat and one-dimensional portrayal of Jong-soo throughout works on some long takes, and scenes with a sense of hopelessness and a lack of real belonging. However, it’s hard to accept that the constant passiveness of our protagonist would last for as long as it does. We’re informed of Jung-soo’s dysfunctional family relationships, with his Father facing a trial and consequent imprisonment for his aggressive nature, which also caused Jung-soo’s Mother to walk out on the family at a young age. For the entire film, we never see Jung-soo show any emotion for either’s situation, even when his Mother calls and meets him after over a decade, and as his Father is sent to prison. We’re aware of the knowledge that Jung-soo’s character is very internal, and understandably so, but this prohibits a connection, belief and only confuses the viewer. It’s unfair to only blame Ah-in for this though, as the characterisation in the screenplay must be looked at.

Continually, this remains with the disappearance of Hae-mi. Until the very last scene, which still results in a lack of an outpour of emotion, we only see polite and interrogative questioning from Jong-soo in his attempt to get the truth from Ben. It’s frustrating and disables a willing suspension of belief that Jong-soo, would still be as passive and mundane as he is. Ben, by the way, could not have been more obviously involved in her disappearance from the get-go, unless we had a close-up of a tattooed confession on his forehead. The height of any emotion for the majority of the film is simply Jong-soo masturbating, and we keep seeing this time and time again. We don’t even see our protagonist’s action, which is writing, for other than a few shots in the final act. The predictability and repetitiveness have let Chang-Dong’s screenplay down, and cause the first and second acts to drag somewhat.

However, Hong Kyung-Pyo’s cinematography results in a visually beautiful film that will earn Chang-Dong’s romantic mystery with many plaudits. With particular mentions going to the landscape shots of in inner and outer Seoul, and foreshadowing throughout. In Hae-mi’s last scene before her disappearance, her dancing and drifting through the wind in front of the evening sky are visually stunning and reflect the beauty, innocence and frailty of Hae-mi’s character. Also, this was foreshadowing Hae-mi’s vanishing and drift off into the unknown with great execution.

Burning’s character development, repetitiveness and predictability are what lets Chang-Dong down. However, it’s a visually stunning film that highlights class division in Seoul, contemporary misogyny, and the vulnerabilities and danger facing some young women who are driven to succeed. These themes are executed with brilliant realism. And while this couldn’t hold up to the eventual winner, Shoplifters, or other frontrunners for the 2018 Palme d’Or, it is a very good film nonetheless.