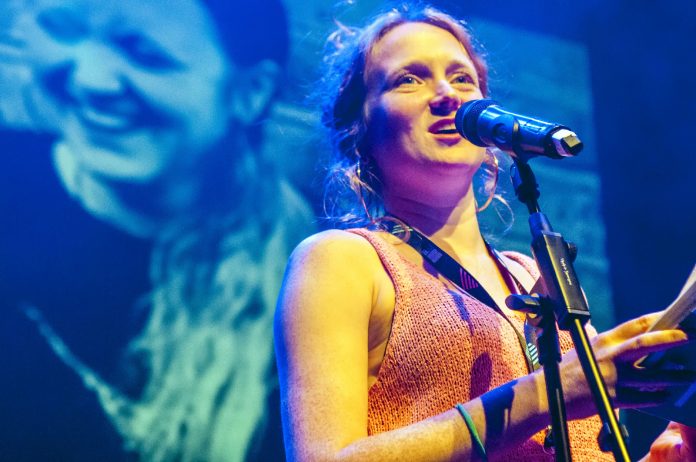 Hollie McNish, poet and author of books such as ‘Plum’ and ‘Nobody Told Me: Poetry and Parenthood,’ joined us for an interview to talk about poetry, critics and culture.

Hi Hollie, how are you?

I’m alright thanks. Just sat on a five-hour train to Swansea at the minute eating my packed lunch reading the book ‘Ring of Bright Water’.

So, how did you get into poetry and more so what drives you to keep doing it?

I’ve always loved writing poems and now that I do it as a ‘job’, if I can really call it that, I’m just thankful to be able to do it full time. I keep doing it because I love writing and meeting people and it’s a damn site lovelier than any of the other admin/shop/café/nightclub jobs I’ve had. If people stopped wanted me to read my poems though, I’d stop gigging and do something else. I’ll always write though, I’m sure of that. It’s an everyday thing really.

Do you have a set way of writing poetry or does it happen randomly?

Nah, just random. Just in snatched moments really. I write all the time. Some stay as scribbles, some I then pick for books and if that’s the case, then I look at them more closely, edit, change. But the ones I just write and don’t ‘use’ or share, they just stay as they are. I don’t ever sit down to write a poem. I couldn’t work like that I don’t think. I don’t want it to become a pressured chore because I love it. If I’ve got nothing to write at any point, I just won’t write anything!

Your book ‘Plum’, which I truly enjoyed, received some harsh words from certain ‘critics’ would you say that affected the way you view poetry?

Ah thanks! Erm, no I don’t think so. I got her point I think. I guess like MTV to music, the popularity of poetry on channels such as YouTube, Instagram etc probably does create some people who do it more for the follows or ‘fame’ than anything. And I think that’s a shame. Or actually, maybe I don’t care too much! I think there has always been that in all art forms. And some of our most canonised writer’s were in it often for money, fame, women.

I’m not sure poetry’s really the way to do that anyway – videos of a cat falling off the sofa still get more views than any poetry!  The main thing I disagreed with is that I don’t think the media through which any art is shared should define it. When I’m called a ‘YouTube poet’ I find it ridiculous. The poems I read online are all in books but not once have I been called a ‘book poet’ or ‘reading poet’. I think there is some belittling to be done by these forced associations with certain writers and social media. There is a lot of Ted Hughes on YouTube. That doesn’t now deem him a social media poet. An example of a living poet would’ve been better here but I’m on a train with no signal to search!

It did affect me, of course. It made me hate writing for a little while. Made me feel stupid. Like I was being laughed at by lots of self-titled intellectuals mainly. But I had that feeling enough at Cambridge University in my first term to know how to feel about it and to know I had enough sense to stand by the ideas in the article I disagreed with and to consider the ones I wasn’t sure about. I didn’t mind the criticism, harsh as it was, or the crux of the idea, it was the assumptions about myself and other writers that I couldn’t really stand. The guesswork about why I wrote and who for and what I was after in life.

One positive thing that came out of it I think was the fact that Watts continuously quoted me and the sort of comments I made about my own work not really being good poetry or well crafted. I think I dismiss my own writing a lot because it’s something I’ve done over years, not something I’ve ‘learnt’ as such. But I think that defines learning then solely in relation to having studied something formally. I don’t really understand the mindset of people who finish a piece of art with the mentality that it is brilliant. I hear poets say ‘this is my best poem’ and it always shocks me. Not in a bad way, I’m quite in awe of it. But I think I need to be a bit more positive about myself here because I do love language and I do work hard on lots of my writing and I do think about the vocabulary and rhyme scheme. I just never say that, cos I’d feel like a wanker. But when Watts mocked me for not understanding metaphor, for example, it made me think. Because I don’t like using metaphor and I don’t use it for just as valid reasons as other writer’s do. I don’t enjoy a lot of metaphor in writing. I want people to say what they mean. I didn’t like all the sort of secret codes of imagery in TS Eliot for example. It really put me off. But not using certain techniques in language doesn’t make me less viable or more stupid or less thoughtful in my writing.

I thought a lot of it was insulting guesswork basically. Some was very good criticism. And some sounded like snobbery which I wouldn’t associate with the viewpoints that I’ve seen this author discuss on platforms like youtube.

Weirdly, I re-read the article for the first time yesterday. Just to make sure I wasn’t still too upset about it all. And it was fine this time.

If a poem could describe how you feel right now, which poem would it be and why?

Right now, in all honesty, I’m feeling pretty ill and I’m touring on my own and just got my period but am on a 5-hour train till I can buy things I need for that and I’m feeling a tiny bit sorry for myself! So what just came into my head with this question is the poem ‘The Rabbit’s Christmas Carol’ (if you disregard the Christmas reference!). I’ve had this poem in my head whenever I’ve felt poorly since I was about 5 years old!

I’m sick as a parrot

I’m sick as a parrot

So get us a lettuce

That’s a splendid poem. Do you have a favourite poem or a selection of poems?

No, I have lots. I loved Roger McGoughs’ Pie in the Sky as a kid. My favourite though was Please Mrs Butler. Then in recent years, I guess a few favourites have been ‘How You Might Know Me’ by Sabrina Mahfouz, Physical by Andrew McMillan, Oyster by Michael Pedersen. I think the poem I have listened to more than any other has been Barry McGuire’s song ‘Eve of Destruction’. I used to listen to that on repeat. I consider it poetry. Or the Outhere Brother’s Boom Boom Boom Dirty Version. That was an eye-opener.

The single poems that most affected me have likely been Jackie Kay’s piece about her parent’s treatment in their retirement home and Wilfred Owen’s Dulce et Decorum Est.

So, what are you working on now?

At the moment I’m working on putting together poems and stories for a next book but it’s hard to choose which to use and I need to edit them really well. I’m also trying to learn Nobody Told Me in French and Spanish as it’s just been translated. I can’t speak Spanish well but thinking this might be the way!

No idea, really. That’s more of a thousand word essay question! Whatever it might be, I don’t think it’s as related to registers in language as we historically enforced. All I know is that I’ve been called both ‘anti-culture’ and also ‘non-culture’ – both times by somewhat privileged older professors and I found both labels pretty insulting! I think we often call people ‘cultured’ simply because they’ve been able to afford more experiences than others. I don’t know. It’s a difficult concept to whittle away on a few lines!

Thank you for joining us Hollie, we hope the poetry keeps coming!

Hollie McNish will be speaking about her poetry collection ‘Nobody Told Me‘ at Cheltenham Literature Festival (5th-14th October).