The Strangest Films I’ve Ever Seen: Last Year at Marienbad (1961) 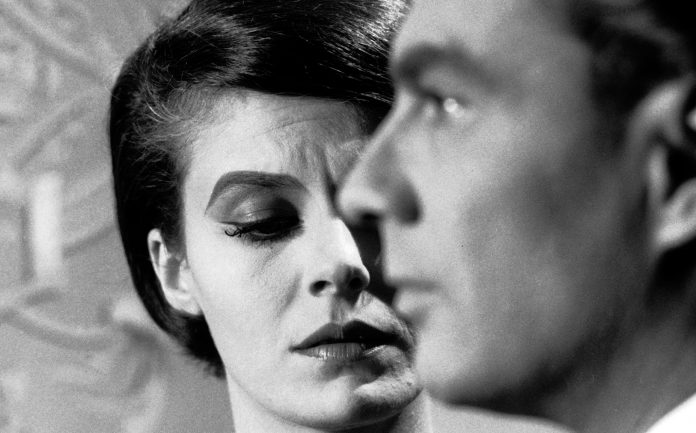 Get ready for the Modern Art version of “The Song That Never Ends”.

Last Year at Marienbad (1961) is a beautiful, baffling product of Franco-Italian cinema, written by Alain Robbe-Grillet and directed by Alain Resnais. Having seen it, you might have an existential crisis that lasts a year…or a day…or an hour. Time has no meaning in Marienbad. Or Frederiksbad. Or wherever we are. Readers, there are a lot more or‘s where those came from. This is a ‘non-narrative film’. And it is truly remarkable.

Not being told a story has never been more fun. In this ancient, elegant hotel, wealthy souls wander casually in a time loop. We begin with an ASMR overview of our chic hotel.

Robbe-Grillet ingratiates viewers into this silent, reverent world with a hypnotic monologue that repeats like an infinite funeral dirge: “These corridors…these salons and galleries…this edifice of a bygone era…this sprawling, sumptuous, Baroque, gloomy hotel.”

The words are even more sensuous and mysterious in their original French. As we hear them, Resnais provides the images: magnificent vaulted ceilings, gold-leaved chandeliers, foreboding hallways and, finally, stone-faced people.

We realize belatedly that the monologue we hear is part of a performance… Or is it?… The hotel has staged a play, about a woman hesitant to run off with her lover. A bell chimes. “Voila.” She is his. The play ends, and the camera patrols the hotel with impartiality. We seem to be eavesdropping on every monotonous conversation, the weather, the frustration of a lover, all made in the same doleful tone. Then, in a graceful and imperceptible transition, we find our central characters: A, X, and M.

At least those are the names they were gifted in Robbe-Grillet’s screenplay. In magical realist’s castle names are immaterial. All that matters is what X insists: that he and A met last year, in a place much like this one. They were passionate lovers and she must run away with him.

It becomes apparent that the handsome X (Giorgio Albertazzi) is our voiceover artist as well as the black-tied shadow compelling and repelling A around every corner. A (Delphine Seyrig) wards him off with stunning costumes by Chanel, an artfully poised arm, and hushed supplications: “I don’t know you. Please, leave me alone.” The next moment, they’re dancing, not quite cheek to cheek. Then, a scream! All the while, M, who may or may not be A’s husband, hovers nearby, a vulture with a diabolical acuity for parlor games.

What happens next? There is no next. Scenes float and cut in and out of each other without warning. A walks down a corridor wearing a black dress, then continues her walk in white. X is seen firing a gun. A, inside, seems to hear it and holds her hand to her heart. But the camera pans out and X is there beside her, telling her their ever-fleeting, ever-repeating story.

We, the audience, are uncertain who remembers whom, what is real and what is a flashback. Is this last year or this year? What events are true? In answer, our characters exercise the word ‘peut-être’ – perhaps. “Perhaps it was in another room.” Or, “It is not true – peut-être.”

The same phrases are heard again and again, as A and X rigidly walk the hollow halls, the geometric garden. And let’s not forget the pounding organ that is our almost constant background music. These elements combine to create an almost narcotic film, one that lulls you even as your heart begins to race. Watching Last Year at Marienbad, one cannot help but feel mind-snatched by Resnais. The crisp parallels between black and white, the reappearances of objects, words and signs, and the ever-more-chilling X voiceovers hold you captive and set your eyes swinging.

Then – snap! – you’re startled from the trance. X, the harmless narrator, encounters slips in his narrative. I’m particularly captivated by the scene below. Is A’s memory faulty? Or is X losing control of the scene? Meanwhile, changes suggest X took A by force. “No,” X screams as we careen down a white hallway, “No! It was not by force!”

Was it by force? Did the two meet last year? Or, did X meet A in her hotel room, again and again over countless Marienbad years? Can they run away together? Do we hope they do? These and more questions are rolling in the viewer’s mind – a spinning lottery wheel of questions and theories. Instead of digging desperately for the answer, let’s appreciate a few possibilities.

Some believe Last Year at Marienbad is a retelling of the Orpheus and Eurydice tale, in which the son of Calliope attempts to return his wife from the land of the dead. This would explain the classical statues that “might as well be you and me” (says X), as well as the violent effort from X to make A ‘alive’ through their affair. A broad version of that theory may find Marienbad an analysis of existence and time. Black, white, death, life, sex, rape, all pass through the world in repetition, without reason and without end.

Then again, maybe it’s a socialist’s tale. Or a feminist’s lament. Maybe it’s a satirist’s jab at élite resort-goers, fashionably at their leisure in the middle of the Algerian War. Whatever your take may be, Last Year at Marienbad is a jewel of the Left Bank – and of film itself. I believe Harry Medved, author of The Fifty Worst Films of All Time, deserves a good smack for including Marienbad in his list of dishonours.

Last Year at Marienbad is a film that unlocks story and unravels an audience. Its cinematic prowess incites rapture and tension, even in the monotonous, grey nothing developing on screen. We leap to the edges of our seats to compensate for the emotionless glances, the silence, the corridors, the salons, the galleries… In this case of hypnosis, we feel everything and continue to do so long after le fin. So, we sit back, rewind the trance – and watch all over again.

Get ready for the Modern Art version of “The Song That Never Ends”.