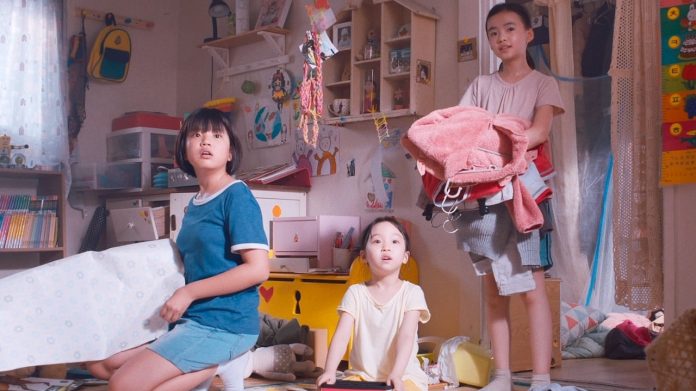 It is the summer holidays, and a young girl named Hana is trying her best to get her family back together after fights start breaking out between her parents. Hana sets out on a mission to go on a trip to the beach with her family as she realises that’s what brought her parents back together the last time they were in conflict. However, Hana is sidetracked from her mission by two new younger friends, sisters Yoomi and Yoojin. With a new friendship formed, Hana finds that she is not the only one with trouble at home, as the two sisters are in danger of moving houses having just moved to their new surroundings. Hana joins the sisters on a mission to distract potential tenants by playing silly tricks, forming a sisterly bond with the sisters along the way.

In this family-based drama, Ga-eun Yoon focuses on the theme of youth that has been active in her previous film, The World of Us (2016). The 2016 drama went onto be nominated for the Crystal Bear and Best First Feature Award at the Berlin International Film Festival in 2016.

The House of Us brings out the familial themes from the child’s view, in this case, Hana’s. From the start, the audience is presented with Hana being trapped in the middle of an argument between her parents. From then on, the audience is put to focus on Hana’s life and perspective. This focus on one character’s view, let’s the audience take in the thinking behind Hana’s actions and smartly drives the story without much confusion, emphasising the hardship Hana is going through.

Acting-wise, the three young girls have to be admired for their superb performances. They carry the story in such a natural way that at times it feels like it’s a documentary. Hana, played by Na-yeon Kim, displays equanimity and sanguine under challenging with pure brilliance. Additionally, Yoomi, the youngest of the three played by Ye-rim Joo brings in a wave of laughs through her animated personality and contagious laugh. While Yoojin, the older sister of Yoomi played by Si-ah Kim, delivers a dynamic experience that brings out the best out of her fellow cast.

In terms of technical aspects, the film flows well through smart editing. It doesn’t take long to move on between events, and thus it doesn’t feel stretched for the sake of the art but instead floats like a well-made drama. Further, the vibrant colours of the film and bright lighting bring in a warm summer feel and in some ways symbolising the optimistic view of Hana, Yoomi, and Yoojin.

The House of Us, delivers the enjoyment factor while dealing with real problems that families and the youth face in their homes. Ga-eun Yoon’s capability to portray the harsh experiences of three young girls through a relatable lens brings out a factor that is only common in emotional cinema. Having enjoyed The House of Us, I am eager to see what is next for Ga-eun Yoon.

Review: The House of Us (2019)The House of Us, delivers the enjoyment factor while dealing with real problems that families face and more especially, the youth. Ga-eun Yoon's capability to portray the harsh experiences of three young girls through a relatable lens brings out a factor that is only common in great cinema.