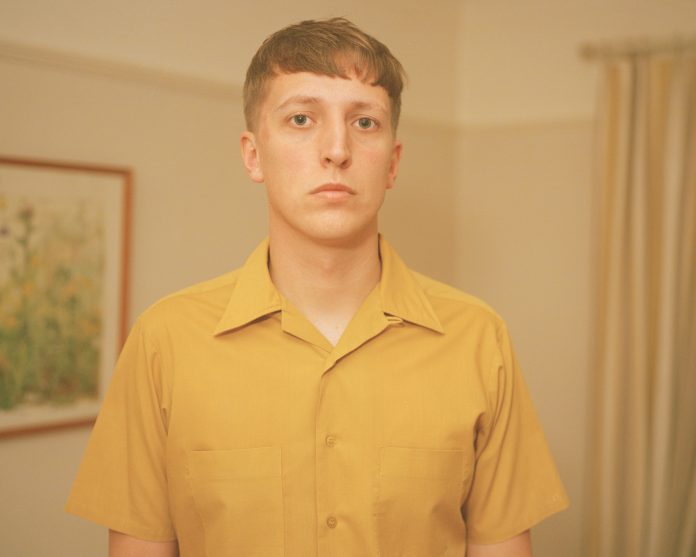 “When the music fades, all that we’re left with is limbo days,” says singer-songwriter Jake Cope, frontman of the Doncaster-based trio Guest Singer, who are set to release their latest EP Limbo Days on February 14th via Heist or Hit. Comprised of Cope as well as France Lahmar on bass and Paul Burdett on guitar, the band have just come out with a fresh new single, ‘Think Face’, a jaunty, propulsive synth-pop tune about the complicated process of songwriting that’s most reminiscent of Alex Cameron’s blend of bright synths and dry humour. As evidenced in their previously released single ‘FOMO’, however, Guest Singer also evoke the very real anxieties haunting our everyday social and digital realities, as Cope isn’t afraid to be vulnerable in both his lyrics and his delivery: “I’m so fucking lonely,” he croons on the chorus of the anthemic ‘FOMO’, before lamenting “Running out of content/ And your life looks better than mine” against a dark, infectious bassline. It’s a perfect taste of the type of poignant, insightful commentary on social media that permeates their upcoming EP, expressed through the lens of an artist who must constantly go through a process of self-representation online, but also reflecting wider sentiments prevalent throughout society.

We caught up with Jake Cope of Guest Singer for this edition of our Artist Spotlight series, where we showcase up-and-coming artists and give them a chance to talk a bit about their music.

When did you start making music and what are some of your key inspirations?

I started quite early. I’ve always been drawn to lyrics and themes. Like a great lyric overrides everything for me. One line, delivered in the right way can move me more than a piece of music sometimes. So I’ve always been focused on getting the words right and the rest will follow.

Your SoundCloud bio reads #imirrelevant – could you talk about the origins of that?

That was the tagline for our first EP (‘I’m Irrelevant Now’). It also expresses the anxieties that are more apparent in life now. The lust to not be forgotten.

Your new EP deals in large part with social media – what’s your take on the current state of online communication?

It can be wonderful. It can be amazing, and connect so many people, but it can also intensify aspects of people’s lives that they think is missing and constantly remind them of it.

We know the negatives and we are all aware and we all participate. It’s also a huge contribution to reality being at stake. Only time will tell.

What’s your approach to tackling these themes in your music?

So I’ve been going through a period of starting out with the song title first and I’ve found it’s been good in having a focus. Songwriting is stressful at the best of times, so that’s eased it a little for now.

Could you talk about the process of recording ‘Limbo Days’? How was it different from what you’ve previously done?

So the first EP was written in the studio with a producer called Matt Peel. This one was done at both mine and France’s (Lahmar, bassist) home. We thought it would be exciting and interesting to do the opposite in what usually happens, in that you usually start making music at home then aim for studio releases. It was a conscious decision because of the subject of the EP, that it needed to be recorded and produced at home.

How was it like working with producer Matt Peel?

It was a great experience. It was great to have the chance to write in the studio and just be as free as possible. Having Matt’s knowledge and the amazing gear he has was like being let into a synth wonderland and being allowed to stay.

We’ve always had a mentality of ‘what’s next?’. So we will just keep going until someone pulls us to the sideline and says ‘come one, give it a rest now’. More music. More shows.