Harry Clabon has been creating some of the sharpest and wittiest comics and animations over the last two years. His regular Frog Wrap series details the absurdity of everyday situations in ways that are as relatable as they are funny. Harry very kindly sat down with Our Culture Mag this week to talk about his work, where his inspirations come from, and what’s next for Frog Wrap.

All examples of Harry’s work included in this piece were chosen by Harry for inclusion in this interview.

Hello Harry! Thanks for speaking to Our Culture Mag. How about an introduction?

It’s my pleasure! I’m Harry Clabon, a 22-year old comic artist and animator from Birmingham. I’ve been out of education and working freelance for just under a year and I specialise drawing funny cartoons and fantasy adventure stories.

Frog Wrap has been going for over a year now, and its self-contained adventures are always funny. Where did Frog Wrap come from?

Frog Wrap initially started because I felt that I wasn’t creating enough stuff that could be regularly seen. I was spending months working on huge animation or comic projects, but it meant that I’d only really be sharing my big work once or twice a year and as someone with a perhaps unhealthy need for constant validation, that just wasn’t cutting it. I was also struggling with the feeling that what I was putting out didn’t necessarily reflect “me”. It’s an odd, and very self-absorbed, thing to worry about but I was really feeling like my work was quite impersonal and any small following that I had gained for it didn’t really know me. So, these messy, short, autobiographical stories about myself seemed like the perfect solution. It’s been very nice just to have this constant project that I’m working on and sharing with people. 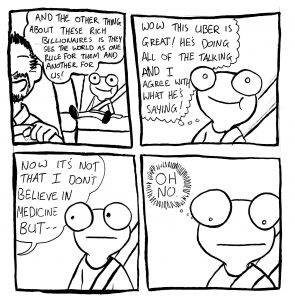 What inspires the stories?

Just before I started Frog Wrap, the artist Lucie Ebrey had just wrapped up on her five-year-long daily autobiographical comic series, Muggy Ebes. I remember reading the last one after years of keeping up with it and being filled with the feeling of “this is it! This is something I want to do!”. I’ve never quite reached the vulnerable and diary-like quality of that series but it’s definitely the start of me wanting to dive into autobiographical daily comics. I call Frog Wrap auto-biographical but that’s probably only about 70% true. They’re all based on real events from my life, often from the day that they’re drawn, but I take a lot of artistic liberties when it comes to telling it in the comic format. I try to focus much more on how the event happened and always slant it to a more comedic angle. For example, I don’t literally shoot lasers out my eyes if I touch a pot that’s too hot, but it sure feels like it and makes for a much funnier comic. They all start as real events though. 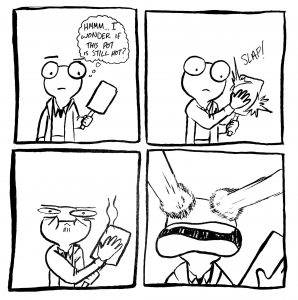 What got you into drawing stories like this in the first place?

There’s not like a specific moment from my childhood where I was like “hey I’m gonna start telling stories now” but I think I always struggled with seeing the point in drawing an illustration if it wasn’t building to some kind of narrative or outside purpose, so comics and animation have always been a good fit for me. I remember my older brother used to make comics when I was like 7 and obviously, I copied him and stole all his ideas and made comics to pass around in my junior school class. I think from that I learned at a very young age how good it could feel to have people read your work and respond to it and that kind of feeling for me has always been associated with telling a story.

What’s next for you as an artist and animator?

Aside from just continuing to make Frog Wrap, my biggest current project is my new web-comic Detonator Girls. It’s a fantasy western about two outlaw gals travelling across a land ruled by a mega corporation. It’s just a comic at the moment (it’s still in its first month of being released!) but in the future I have plans for animated components like short action scenes, fake TV show openings, that sort of thing. I think it’s going to be lots of fun and very good and I haven’t felt this motivated about a big project like this in a long time! 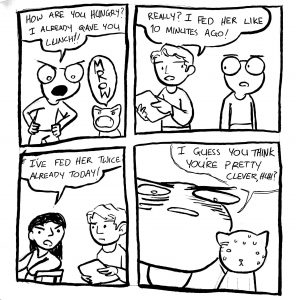 OC: Thank you so much for talking to us, Harry! One last question, what is your definition of culture?

Oof, big question and not something I’ve necessarily given that much thought about in the past. I guess if I had to put a definition on it then I would say that it’s everything we absorb that informs the things we make. If something has inspired you, changed the way you thought about something, or affected something you were making, then I would call that culture.

Harry Clabon’s artwork can be viewed on their Instagram, Twitter, and Tumblr pages. You can also view more of Harry’s work on their official website and KoFi pages!