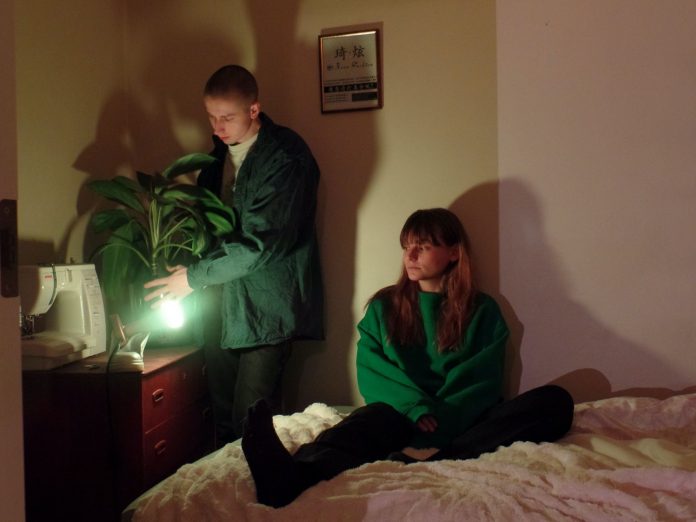 Jouska are an Oslo-based musical duo consisting of Marit Othilie Thorvik and Hans Olav Settem that blend elements of bedroom R&B with electronic music. Citing artists such as the Internet and Grimes as influences, they started releasing singles as far back as 2016, and put out their Frog Fiction EP in 2018, making rounds in the Norwegian music scene. But their songwriting approach has shifted over the last couple of years, incorporating more vocals and paying more attention to the narrative and emotional elements of the song. Their latest single, ‘Bring You Back’, featuring production from Sunniva Lindgaard of Sassy 009, utilizes a slick, infectious instrumental while delivering an emotive vocal performance that speaks not just to the obsessive, often irrational feelings that permeate your existence after a break-up, but to the lingering, ghostly presence of the ex-lover in your mind and the inescapable pain of their physical absence. “I never thought that you could hurt me like that/ Feels like a part of you is stuck inside of my head,” she sings in the chorus, which will get stuck in your head regardless of your relationship status. Its somber yet oddly comforting mood is something we’re excited to dive into once their debut album comes out later this year.

We caught up with Jouska for this edition of our Artist Spotlight series, where we showcase up-and-coming artists and give them a chance to talk a bit about their music.

When did the two of you meet, and how did you form Jouska?

We met while studying music together in Oslo. We both hail from smaller towns and had just moved to Oslo, both eager to experiment with electronic music for the first time.

We find inspiration in a lot of different genres and artists. Recently we’ve been listening a lot to R&B and scandinavian club music.
In general, some of our biggest influences would have to be Grimes, Gorillaz, Little Dragon and Smerz.

How has your approach to songwriting changed since releasing your first few singles?

It used to be more about the instrumentation. It would start out with instrumental ideas, and then we created vocals and lyrics that would match these ideas.

But in the last year, songwriting and vocal production has gotten more important to us. Now it’s more about telling a story and creating a unique vocal narrative for the listener to follow.

Could you talk about your new single, ‘Bring You Back’? What were some of the ideas behind it?

We wanted ‘Bring You Back’ to be both dark and uplifting at the same time. It’s a track about missing someone and obsessing over fading memories. Merging RnB with alternative bedroom pop production is something we’ve wanted to do for a long time, and it’s gonna be the main mood for the rest of our debut album as well.

How was it like working with Sunniva Lindgaard and Andrew Murray for the track?

It’s been great. Andrew Murray gives so much life to the songs in the final mixing process, while Sunniva Lindgaard helped us open up our creativity in the sessions with Bring You Back. Her vocals also really helped set the emotional mood that we wanted to express with this track.

What are you currently working on? Should we expect a full-length release anytime soon?

We’re currently working on our debut album set to release in the fall. The songwriting is pretty much done so now we’re just gonna work intensively to make every sonic detail perfect.