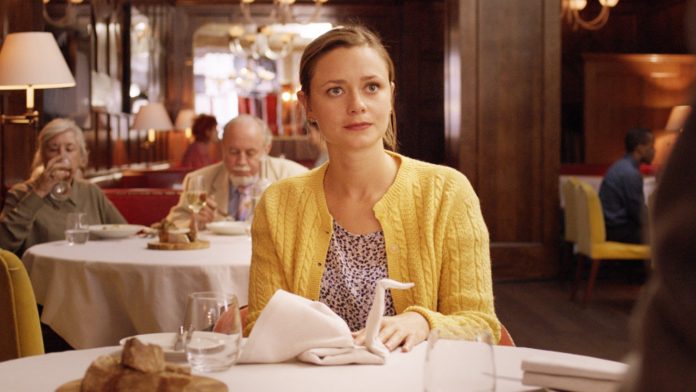 Adapting her 2011 short Lunch Date into a feature-length film, writer-director Sasha Collington delivers an enjoyably relatable romantic comedy with Love Type D. The premise is simple: when Frankie (Maeve Dermody) gets dumped by her boyfriend, Thomas (Oliver Farnworth), via his nerdy pre-teen brother Wilbur (Rory Stroud), no less, she soon discovers that she has more than just bad luck – she has the dumpee gene. Yes, the dumpee gene – as Wilbur informs her, a new study published in a scientific journal posits that all people are born with either the dumper or the dumpee gene, which has the power to determine one’s love life forever.

Dumbfounded, Frankie decides to carry her own little experiment: under the pretense of an HR investigation, she asks everyone in her office how many times they’ve been dumped, and it tests out: everyone is clearly in either one category. The newly-formed group of office dumpees is one of the most endearing elements of the film, and creates opportunities for plenty of effective comedic moments. But by far the most refreshing part of the film is Frankie’s unexpected but affecting relationship with the young Wilbur, whose wit, scientific curiosity, and downplayed compassion are key to the film’s succesful DNA.

Things start to get interesting when Wilbur comes up with a theorem that the dumpees have the potential to become dumpers if they date and dump every person they’ve ever been with, and Frankie and her fellow dumpees decide to take the challenge. Except Frankie’s task seems to be particularly insurmountable considering that she’s got eleven exes, chief among them her most recent one. And no matter what she does, she can’t help but embarrass herself with every attempt to break that spell.

There are a few moments that elevate Love Type D from an otherwise run-of-the-mill romantic comedy to a frequently imaginative endeavor surviving not just on its winning premise but also its refreshing personality. One sequence, for example, features some playful use of stop-motion as a means of facilitating an exchange between Frankie and the ghost of one of her exes. Elsewhere, the filmmakers get creative with the backstory surrounding another one of the exes. And finally, Collington’s script isn’t afraid to take the protagonist’s doomed obsession with Thomas to some hilariously absurd extremes as the plot progresses.

Not every scene is as exciting as the next, and while the film is not in any way groundbreaking, it’s nice to see the filmmaker taking risks and going slightly beyond the by-the-numbers formula of a romantic comedy, to the point where it barely can even be categorized as one. There’s not much of a love story here, except of course one of self-love as Frankie learns to gain confidence in herself – a familiar trope, yes, but not annoyingly so. When the story’s inevitable twist arrives, it doesn’t come as a shock as much as a comforting confirmation of what you’ve probably been expecting from the beginning. Love Type D might not be a gamechanger, but there aren’t too many flaws in its genetic code – it’s exactly what it sets itself out to be, plus a little bit more. And God knows we all could use a dose of harmlessly fun entertainment right about now.

MANIFF Review: Love Type D<i>Love Type D</i> might not be a gamechanger, but there aren't too many flaws in its genetic code - it's a relatable, frequently imaginative romantic comedy with a winning premise that achieves exactly what it sets out, plus a little bit more.