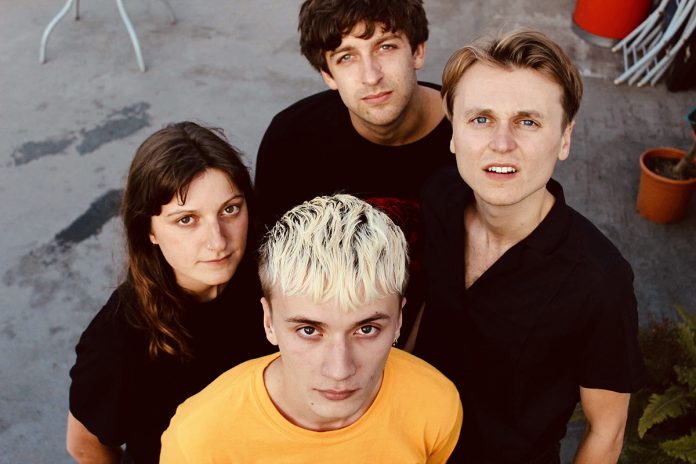 Talk Show, an exciting band out of South London, joined us to talk about their new music, quarantine, and culture.

Isolated but we’re keeping well thanks, despite everything. Chloe’s knitting a scarf for Christmas, Tom’s learning to cook pasta, Harrison’s working on his abs, and I’m enjoying the sun.

So, how did the band start and where did the influence for the sound come?

We started a few years ago, all of us were studying at the time. Harrison and I met while at a mates house party, we got talking and bonded over a similar taste in music, as the music that was playing at the house party was crap, so we started chatting about old post-punk and that. Tom was living with me at the time, and Chloe appeared outside the local library, by chance she had overheard Harrison talking about needing a drummer! We had all moved to London to start some new projects so we got into a rehearsal space and it kinda all went from there.

Our influences are definitely rooted somewhere between that ’80s darkwave scene, and the more dance-oriented stuff from the ’90s. But we definitely bring a lot of our own inspirations into play.

You’ve had a few singles released and have a debut EP coming out, what was the idea behind it?

Well, we’ve always seen ourselves as more of a live band, so for the EP we really wanted to try and capture that same energy we put into our shows. It was a lot of fun to make, and after doing the previous singles we kinda had an idea of what works for us. The tracks themselves are reflections on everyday life and frustrations that we encounter living in a buzzing city, and Harrison brings a very honest, and at times slightly morbid, perception of the world into his lyrics.

Did you face any challenges producing the EP and how much harder is it making an EP than a single?

Being honest, the hardest thing was just finding the time and money to record it haha. We were well excited to be doing it, and the tracks on it we’d been playing for a little while so it all just kinda worked. We did half of it with the producer Space, who was amazing to work with, and the other half by ourselves. Having been in a few studios to record the previous two singles, as well as demos, we’re starting to learn and grasp how we work best in the studio, so bring on the next one!

With 2020 coming to a halt with COVID-19, what are your plans for the year in terms of releases and other endeavours?

Hmm.. Well this week we’ve been working on trying to create a live session while all in separate houses, it’s challenging but keep an eye out for that. We’ve been asking people to send us their self isolation videos to our tracks, which are hilarious, keep them coming people we love them.

We’re working on a few other ideas to help everyone through their lockdown, our April tour is rearranged for September, dates and details on our socials and can’t wait to get gigging already.

We have been working on new material for a while so once out of isolation and after Chloe has finished her scarf, Tom’s a pasta wizard and Harrsion has rock hard abs we’ll get it up and out.

Well, right now culture is staying at home, looking after yourselves, and supporting those who need help. Getting into home fitness, jigsaw puzzles and cooking.

Keep listening to good music, show support for artists / venues / indies wherever you can, make art, create and don’t let the bastards grind you down.

Thank you for joining us!