Album Review: Diet Cig, ‘Do You Wonder About Me?’ 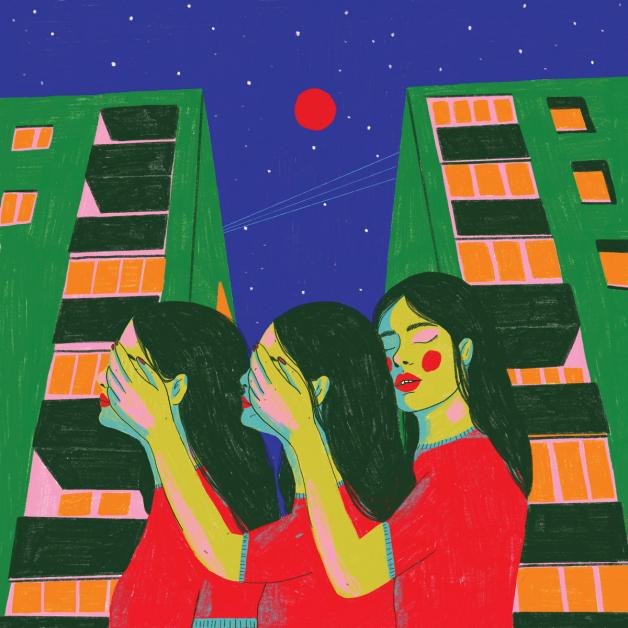 Listening to Do You Wonder About Me?, one thing is clear: Diet Cig have grown up. The indie rock duo, who broke into the scene in 2015 with their EP Over Easy, had already started showing signs of maturity with their 2017 debut, Swear, I’m Good at This, which was followed by a massive world tour over the next two years. Still, it felt like the duo had kind of painted themselves into a corner – their brand of indie rock resonated with college audiences thanks to its snappy one-liners, relatable humour, and jangly DIY production, not so much its emotional depth or ambition.

Fearing the dreaded sophomore slump, singer/guitarist Alex Luciano and drummer Noah Bowman relocated to Richmond, Virginia, taking some time to write and record, but also to self-reflect. And it shows – both in terms of its sound and its content, Do You Wonder About Me? feels more expansive and polished than its predecessor. The sense of vulnerability that was only hinted at on Swear, I’m Good at This takes center stage here, as Luciano explores the aftermath of a break-up with striking honesty. On the first three tracks, her tone goes from snarky (“I’m thriving, thanks for asking”) to bitter (“Who are you to say ‘I’m sorry’, when/ We both know, you’d do it all over again?”) to finally candid as she reveals how the separation has truly affected her mental health (“I’m doin’ my best to keep it in check but/ It’s out of my control”)

From that point on, it feels like a veil has been lifted – as if those first nine minutes of the record were enough for Diet Cig to realize that vulnerability may actually be a stronger weapon than humour. It all culminates with ‘Broken Body’, the centrepiece of the record and an absolute stunner of a track; the shoegaze-inspired guitars and backing vocals feel larger than life, soaring against Luciano’s passionate delivery. “If my body’s broken/ Does that mean that I’m broken too?” she ponders before we’re even a second in, then admits, “I can’t remember the last time I felt good inside my head.”

Not much could successfully follow such an emotionally potent moment, but it feels like ‘Makeout Interlude’ and ‘Flash Flood’ barely even try; the first is a somewhat formless, lo-fi cut, while the latter is a decent but expendable attempt at a classic punk sound that doesn’t contribute much to the record. But they do provide some necessary breathing space, and the record quickly picks up after that: the shimmering ‘Worth the Wait’ imagines a better life where “everything will be alright and I can finally sleep at night”, while the propulsive ‘Staring into the Sun’ once again reaches for the sky. ‘Night Terrors (Reprise)’ is a wondrously dreamy closer, Luciano’s heartfelt lyrics swimming in a sea of bubbly synth arpeggios.

Some might miss the kind of youthful naivety that gave Diet Cig’s early material much of its charm, but one can only hope that fans of the band have also matured along with them. After all, there’s still a sense of self-awareness running throughout the record: “I’ll play the same songs/ Over and over/ Convince myself I’m grown/ I’m older,” Luciano sings on opening track ‘Thriving’, recognizing that at the end of the day, “growing up” is really just a performance, a role we assign ourselves. What separates Diet Cig from other indie acts that have tried to ‘mature’ is that they haven’t done so in a conceited manner that makes them lose track of their personality, but rather by turning inwards and refining their focus. Do You Wonder About Me? proves that Diet Cig have the potential to make a front-to-back great record, if only they took their approach one step further; clocking in at 24 minutes, it still feels more like an EP than a fully-fleshed project. Till then, though, there’s quite a lot here worth coming back to.