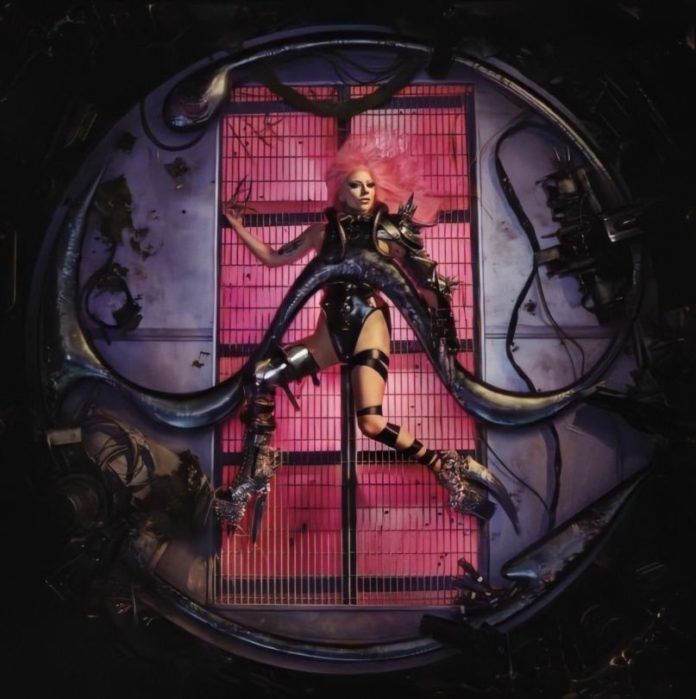 “I’ll be your enigma,” Lady Gaga belts out on the chorus of ‘Enigma’, a highlight off her sixth studio album, Chromatica. As a chameleonic pop star whose image was built on artifice, Gaga seems to not only be reclaiming that narrative as her own rather than one forced upon her, but also suggesting that she will continue to embrace it in the future. She knows she can be anything she wants, even as her last studio albums suggested that she might be finally tearing away those layers to reveal who the real Stefani Germanotta is – first, with 2013’s bold, left-field Artpop, in which she simultaneously presented her most unfiltered and most outlandish self, and then with 2016’s stripped-back, rootsy Joanne, which turned out to be little more than another well-orchestrated performance.

Chromatica might not be the natural evolution some might have expected from Gaga following her Oscar-nominated turn in A Star is Born, but it’s also not just another mask for her to hide behind. Instead, the album finds her revamping not her own style but that of her environment by traveling to the universe of Chromatica, a loosely developed concept that mostly boils down to Gaga’s drive to create an alternative space – and soundtrack – for those keen to abandon planet Earth. Musically, it harkens back to her electropop heyday, and though it lacks the kind of stratospheric hooks that propelled her to stardom, it mostly makes up for it with a sense of blissful defiance that gives Chromatica its unique colour. And though the album may initially come off as oddly monotonous and indistinctive for Gaga, its ideas never fully run dry, with more than enough deliriously enjoyable dance-pop moments to keep you engaged.

In fact, the album’s thin sonic palette almost serves to amplify Gaga’s voice and vision, allowing space for some of her most revealing and personal songwriting. “Turnin’ up emotional faders/ Keep repeating self-hating phrases,” she sings on the throbbing ‘911’, before opening up about ingesting anti-psychotic drugs, while ‘Rain on Me’ deals with alcohol abuse. Of the tracks where Gaga reflects on her own image, ‘Replay’ is the most lyrically interesting, as it finds her exploring the conflict between the artist and the person (“The monster is hiding me”), while the self-explanatory ‘Plastic Doll’ has one of the album’s most euphoric hooks that’s reminiscent of a Charli XCX banger. By far the least successful, though, is ‘Alice’, a 90s-inspired house throwback that seeks to jumpstart the record but whose metaphor falls flat as it attempts to paint some sort of parallel between Wonderland and Chromatica.

But it’s those moments of self-reflection that allow Gaga to let herself go on tracks like the propulsive ‘Stupid Love’ or the empowering ‘Free Woman’, in which she flaunts her powerful voice against a disappointingly dry beat. While Chromatica is undoubtedly Gaga’s game, it’s partly thanks to the guest collaborators that are sprinkled throughout that the album doesn’t feel entirely one-note. Gaga and Ariana Grande play off each other’s strengths perfectly on the disco-inspired ‘Rain On Me’, while the unexpected contribution from K-pop group BLACKPINK on ‘Sour Candy’ sounds slick and infectious, if not entirely memorable. Gaga and Elton John teaming up on ‘Sine from Above’ sounds like a match made in heaven (and it is), but it’s the song’s absurd concept and oddly transcendent late-track breakdown that steals the show. With these tracks, Gaga is embracing the idea that a collaborator can offer so much more to a song than just a marketable guest verse – and in album about “all the colours”, bringing those worlds together makes it feel all the more vibrant.

There’s no denying that Mother Monster can carry a tune on her own, though, and ‘Enigma’, a pop anthem of epic proportions if there ever was one, might be the best example of that. Still, the album is bogged down by its lesser moments, like the vapid ‘Fun Tonight’ or the derivative closer ‘Babylon’, in which the absurdity of the track’s concept is pushed a bit too far – even for Gaga. Chromatica might not be the fully-realized world that its instrumental interludes try to hint at, but it certainly succeeds in delivering more than a few fabulously larger-than-life, nostalgic dance bops. This might not be Gaga shedding the artifice, but it feels like a liberating affirmation that she can paint the world without being anything less than herself.