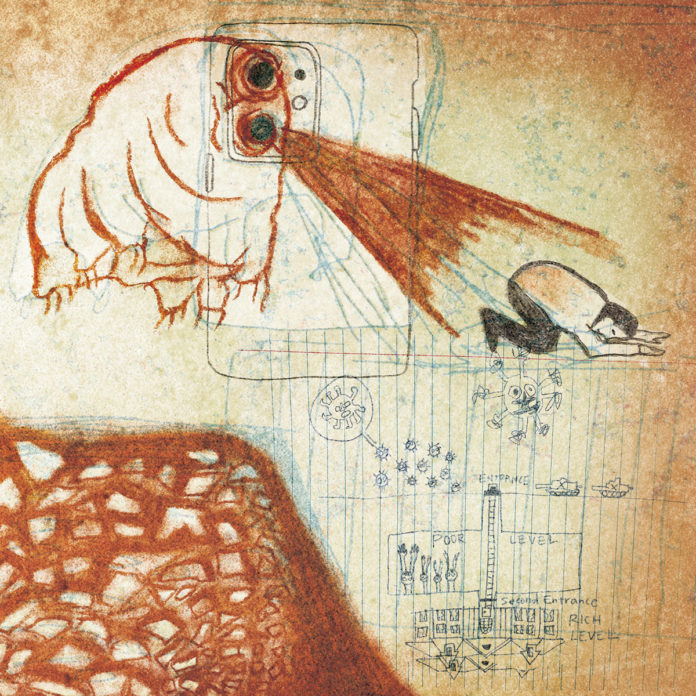 Few bands in the history of alternative music have been as consistently experimental as Deerhoof – which makes it especially crazy to to think that, sixteen albums and two-and-a-half decades into their career, Future Teenage Cave Artists is the closest they’ve ever come to making a concept record. Imagining a post-apocalyptic future wherein a group of teenagers discover and experience art for the first time, the album serves not only as a frighteningly pertinent reflection on the present time, but perhaps more overtly, as a metaphor for the band’s own artistic journey, an attempt to reignite the euphoric rush of experimentation.

Though the band have vowed to take their sound in a new direction with each release, Future Teenage Cave Artists sounds unmistakably like Deerhoof – zany guitars, freaky vocal melodies, bizarre lyrics, dynamic, off-the-wall drum patterns. As usual, they dig into a slew of different genres, from blues-inflected psych-rock on ‘Sympathy for the Baby Boo’ to dream pop on the title track, but with the possible exception of the piano-led closer ‘I Call on Thee’, you wouldn’t exactly call it uncharted territory. But in tracing the journey of these young rebels that are as much part of the past as they are of the future, the band has captured something primal and almost elemental – maybe it’s because they recorded the album using a built-in laptop microphone (yes, you read that right), but it feels like they, too, are discovering the same joys all over again for the first time. If the record’s narrative tends to fade into the background, that feeling definitely rings throughout its short, snappy 36-minute runtime.

“For we, though many, are one bread and body/ Of the same flesh and blood,” sings drummer Greg Saunier, who takes on vocal duties on a number of tracks, on the almost R&B-inspired ‘Fraction Anthem’. And indeed, it feels like all four members of the band – Saunier, Satomi Matsuzaki, John Dieterich, and Ed Rodríguez – are one and the same, a single organism trying to find harmony amidst all the chaos, to coordinate the fragments of its own self. Perhaps the best example of the band’s natural chemistry is the stand-out ‘O Ye Saddle Babes’, with its propulsive beat, thumbing bass, and a monstrous, distorted guitar riff cutting through; ‘’Farewell’ Symphony’ exudes the same virulent energy, only even scuzzier and more upbeat, like the wicked ghost of Joseph Haydn’s symphony of the same name, from which it takes inspiration. “Inner opera continue forever/ People who came were in it together,” Matsuzaki proclaims.

It’s not the only instance where the band repurposes a classical composition, with closer ‘I Call on Thee’ being the other notable example. A starkly quiet rendition of a Bach prelude, the track is not only an unusually minimalist resolution for a band that generally likes to keep things in the air, but also an interesting expression of the interconnectedness of art through time. As conceptual as the album can get, though, some of its most enjoyable moments are those that are inscrutably absurd in a way that only Deerhoof could pull off. It’s hard to excavate any meaning out of ‘Sympathy for the Baby Boo’, for instance, but it’s buoyantly fun nonetheless; meanwhile, ‘New Orphan Asylum for the Spirited Deerchildren’ finds Matsuzaki delivering one of her most memorable one-liners: “Why would you hurt my Bambis?” Sure, pondering the breakdown of civilization using art as a historical tool as well as a form of rebellion is necessary and all, but really, what did her Bambis do to you?