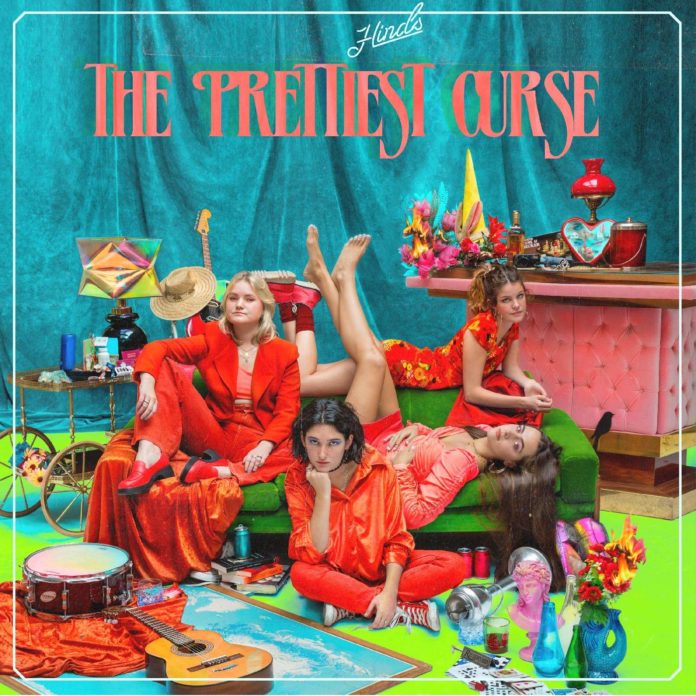 Fans have always been wary of their favourite indie band going pop, and understandably so – too often, slick, glossy production and big hooks come at the expense of the endearing qualities that made their music worth checking out in the first place. But there was less reason to worry with Hinds, the Spanish garage rock group that started earning a prominent fanbase with their breakout debut album Leave Me Alone in 2016, followed by their confident sophomore outing, I Don’t Run, two years later. Even if the band was never too shy about wearing their influences on their sleeves, their music was always infused with a sense of exuberant personality that separated them from run-of-the-mill indie acts who utilized the same formula. And it didn’t look like they were gonna give up that youthful spark any time soon.

Thankfully, that doesn’t happen with their latest album either – instead, The Prettiest Curse is a welcome change of pace that enhances those qualities rather than diluting them. After all, despite admitting to being “afraid of pop” for many years, Hinds’ approach naturally lends itself to big choruses and sweeping arrangements thanks to the sheer infectiousness of the  songwriting itself. Besides, tracks like ‘Just Like Kids (Miau)’ exhibit a sense of playfulness that more than assures the listener none of the band’s personality is gone, while also providing wry insight into what it’s like to be a girl in a band, even in 2020 (“You’re too pink to be admired/And too punk to be desired”). This also marks the first time in the outfit’s career that they’ve ever sung in their mother tongue, most notably on tracks like the bouncy opener ‘Good Times Bad Times’ and the flirtatious ‘Come Back and Love Me <3’, the latter of which also incorporates a classic Spanish guitar progression that further pays homage to their home country’s culture.

There’s no denying the band is being anything less than themselves here, which of course also means being upfront about not knowing what that exactly entails. “’Cause all I do is question which is the real version of me,” Carlotta Cosials and Ana Perrote duet on the defiant chorus of highlight ‘The Play’, before a wave of soaring guitars kicks in to catapult the track to breath-taking heights. The album’s oxymoronic title is no coincidence – the album largely navigates the contradicting feelings that come when a relationship is at the edge of falling apart or just after it’s been terminated, vacillating between a newfound sense of empowerment and an all-consuming surge of desperation. The jangly yet oddly shoegaze-inspired ‘Riding Solo’ details sleepless nights spent apart from the singer’s lover (“All day feels kind of useless if I don’t give you my night/ Like instinct of survival, you’ve been engraved in my mind”), while tracks like the effortlessly catchy ‘Waiting for You’ are more confrontational in their approach. The dreamy ‘Boy’, on the other hand, is a nice contrast to those conflicted moments, evoking the simple, uncomplicated rush of falling in love all over again.

There are certainly grand, almost arena-sized arrangements here, but there is also quite a bit of bite to the production, courtesy of Jenn Decilveo (Albert Hammond Jr., Bat for Lashes’ Natasha Khan). Though it sometimes has the unfortunate effect of drowning out the engaging interplay between Cosials and Perrote, the dynamic and colourful mixes amplify the feelings of restlessness that permeate throughout the record without being too overbearing. With so many larger-than-life, invigorating moments, the spacious but emotionally piercing closer ‘This Moment Forever’ serves as a pleasant surprise, an opportunity to take a step back and reflect on what Cosials breathily describes as “joy down my throat”, unintentionally providing the perfect metaphor for the album itself. Hinds may always be an unapologetically of-the-moment, no-frills rock band at heart, but The Prettiest Curse proves they’re not afraid to grow and take their sound a step forward. And they’re not afraid of going a bit pop, either.

Album Review: Hinds, 'The Prettiest Curse'Fans have always been wary of their favourite indie band going pop, and understandably so – too often, slick, glossy production and big hooks come at the expense of the endearing qualities that made their music worth checking out in the first place. But...