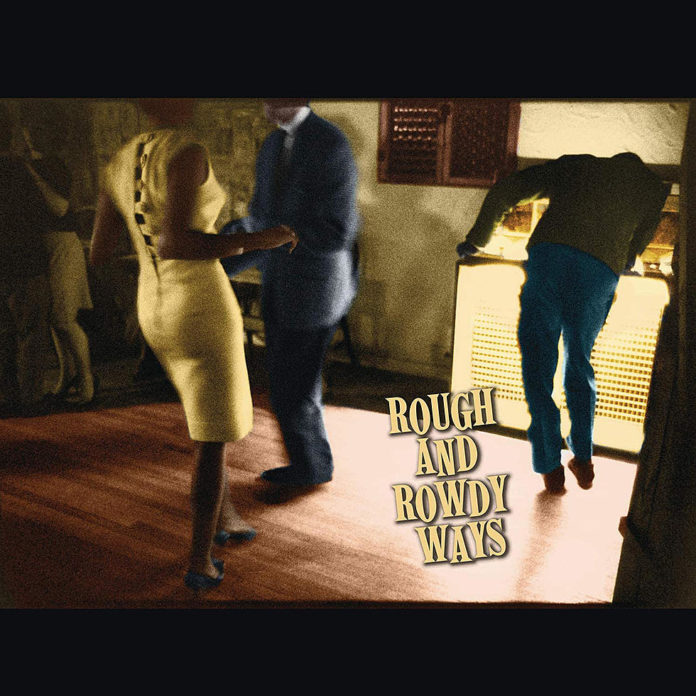 Bob Dylan contains multitudes, but he is also one of the few songwriters who can make that claim about himself without being accused of arrogance. (Though I can’t help but mention Moses Sumney, a man 50 years younger than Dylan, who powerfully proclaimed his own multiplicity on this year’s græ.) In addition to referencing Walt Whitman’s ‘Song of Myself’, opener ‘I Contain Multitudes’ sees him comparing himself to everyone from Edgar Allan Poe, Anne Frank, Indiana Jones, The Rolling Stones, and William Blake. Rough and Rowdy Ways, the bard’s 39th studio album and first collection of original songs since 2012’s The Tempest, is also full of contradictions. The songs here are heavily loaded with cultural allusions, but they can also be seen, as ‘False Prophet’ simply puts it, as “songs of love” and “songs of betrayal”. Musically, they are both gorgeously refined and frequently ambitious, and yet they are also some of his most immediate. If there’s one thing that’s certain, though, it’s that the record contains some of his best compositions to date – which says a lot, considering that he is, you know, Bob Dylan.

But ‘False Prophet’, the follow-up to ‘I Contain Multitudes’, is quick to denounce his unshakable status as one of the greatest singer-songwriters of all time. “You don’t know me, darlin’/ You never would guess,” he sings in his trademark gravel, rhyming the line with “I’m just here to bring vengeance on somebody’s head.” It’s a perfect example of how the album manages to deliver gruesome tales about murderers, thieves, and all sorts of sinners while also reflecting on Dylan’s own legacy. He takes on the role of Frankestein on the slow-burning ‘My Own Version of You’, assembling body parts in order “to be saved by the creature that I create” and vowing to “do things for the benefit of all mankind”. It might be framed as classic horror story and shrouded in cheeky references to “Mr. Freud with his dreams” and “Mr. Marx with his ax”, but it’s also about grappling with one’s mortality, with Dylan asking pretty much all the big questions, from “Can you tell me what it means, to be or not to be?” to “Is there light at the end of the tunnel, can you tell me, please?”

‘I’ve Made Up My Mind to Give Myself to You’ follows a similar formula, tracing an entire life spent on the road, “from Salt Lake City to Birmingham/ From East L.A. to San Antone.” On the surface, the track presents itself as a heartfelt love song, but it doesn’t require much digging to realize that it’s actually about accepting death as an inevitability. It’s also one of the album’s many sonically beautiful moments, from its serene instrumental to Dylan’s delicate and soulful delivery, which he’s evidently mastered afters years of perfecting American standards popularized by Frank Sinatra. Laced with the same kind of tender intimacy are the tracks ‘Mother of Muses’ and ‘Black Rider’, both of which combine finger-picked classical guitar and richly rendered production to different but stunning effect. ‘Black Rider’ is yet another meditation on death, and though more direct and earnest this time around, Dylan still isn’t afraid to crack a crude joke in the middle of it all: “Black rider, black rider, hold it right there/ The size of your cock will get you nowhere.”

While these elegantly understated moments make up some of the album’s most magnificent highlights, there’s a delightful swagger to the bluesier cuts here, including the strutting ‘False Prophet’ and the relentless ‘Crossing the Rubicon’. There’s also ‘Goodbye Jimmy Reed’, which is more straightforward and doesn’t have as much to offer as the other two, both of which perfect the art of taking a simple formula and knowing exactly when to pull back and when to give it all, making them well-worth their 7-minute runtime. The sound of the album is by no means boundary-pushing, but it is not only impeccably executed but also perfectly fitting for an album that seems locked into a completely different cultural era. And yet, this is perhaps where the album’s only major flaw lies; it’s not so much that it feels disconnected from the present – it doesn’t – but rather that it’s so fervently keen on latching onto established monuments of the past that it fails to challenge canonical readings of history in any significant way. But of course, that’s coming from one of those youngsters who, as Dylan said in a rare New York Times interview earlier this year, “have no past, so all they know is what they see and hear.” Fair.

Which brings us to ‘Murder Most Foul’ – the apocalyptic 17-minute closing track (and somehow, Dylan’s first No. 1 single) that starts as a take on the JFK assassination but slowly unfolds into a kaleidoscopic rumination that sprawls through the entirety of 20th century American culture. The way it blends fact and fiction, myth and history, Dylan and America – it all seems to contradict the notion that this is one of Dylan’s most down-to-earth albums; the idea that the lyrics here are “tangible, not metaphors,” as he put it in that same interview. But the reason it retains its resonance lies in the fact that it seems to stretch on forever, taking immense pleasure in honouring the legacy of so many artists before him. It’s tangible proof of what he so sincerely proclaims on ‘Mother of Muses’: “Man, I could tell their stories all day.”

Album Review: Bob Dylan, 'Rough and Rowdy Ways'Bob Dylan contains multitudes, but he is also one of the few songwriters who can make that claim about himself without being accused of arrogance. (Though I can’t help but mention Moses Sumney, a man 50 years younger than Dylan, who powerfully proclaimed his...