7 Empowering Moments in Anne With an E 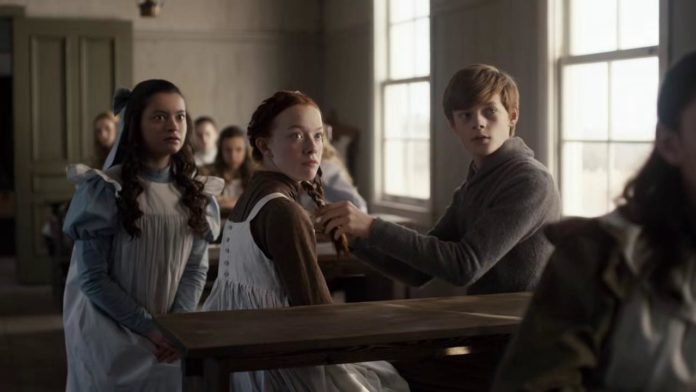 Anne With an E (2017) is a divisive Netflix series that was recently cancelled despite its popularity and the reception of its third season. Based on Lucy Maud Montgomery’s Anne of Green Gables book series, the television show follows thirteen-year-old orphan Anne Shirley as she finds a home in Avonlea on Prince Edward Island. She is adopted by the elderly Cuthbert siblings who initially don’t know what to make of this wild, imaginative child, but soon love her as their own.

Anne makes many friends in Avonlea, but not without her fair share of struggles. The series is much darker and grittier than its utopian source material, and it sees Anne and many other characters deal with prejudice and discrimination. Some of the most empowering moments are when these characters are accepted and change their community for the better – and, more importantly, when they accept themselves.

Cole becomes one of Anne’s closest friends in season 2. He’s very artistic and somewhat feminine, which he’s bullied for by the other boys and the teacher. Anne gets to know her best friend Diana’s Aunt Josephine, who reveals that she never married because she lived with a woman she was in love with. Anne, Diana, and Cole attend a summer soiree at Josephine’s house, where Cole finds that he fits in among the quirky guests, many of whom identify as LGBTQ+.

When Cole returns to Avonlea, he’s miserable and doesn’t go back to school for fear of further bullying. When she learns that he’s been skipping school, his mother is so disappointed in him that she won’t let him leave the farm.

On their next trip to visit Aunt Josephine, Cole tells Anne that he won’t be returning with her. He remains to live with Josephine, where he can be open and proud of his identity, and where he hopes to one day find love.

Josie Pye is a mean girl who tries to demean Anne every chance that she gets. In season 3, she begins a courtship with Billy Andrews, who bullies Cole. When Billy attempts to assault Josie, she tries to confide in her parents, but her father is only frustrated that Josie has ruined her chances at marriage. Mrs Pye is sympathetic but thinks her daughter is to blame. Throughout the season she pushes Josie to advance her relationship with Billy, making Josie curl her every night and encouraging her to start a “Take-Notice Board” (where boys post notes about girls that they take notice of).

Anne is outraged by the rumours of Josie’s promiscuity when she knows that Billy is to blame, and she knows that it will ruin Josie’s reputation. Despite how awfully Josie usually treats Anne, she takes it upon herself to help her bully. She writes a feminist opinion article in the school paper without consulting anyone, but it isn’t received well. The school board bans Anne from the paper, Josie is angered, and Anne’s friends take Josie’s side. Gilbert, Anne’s future husband, is the only person to defend her. The school board also believes that the newly hired female teacher, Miss Stacy, is to blame for her classmates’ behaviour. They steal the printing press and burn the schoolhouse down.

The classmates come together to take a stand at the town hall and protest for freedom of speech. Mrs Rachel Lynde, Marilla Cuthbert’s best friend, threatens to expose the men on the board unless they allow three more women to join and create a gender balance. In the end, Anne’s friends see that she is right, even if it takes some work to push against preexisting ideologies they’ve had ingrained since childhood.

When Miss Stacy replaces the previous teacher, Mr Phillips, many of the local women are shocked by her reputation. She is a widow who doesn’t wear corsets, rides a motorized bicycle, and teaches through practical methods rather than traditional memorization. The so-called Progressive Mothers Group attempt to remove her from her post, but the students won’t have it.

While the adults of the town are meeting to vote on Miss Stacy’s removal, the students concoct a plan to convince them otherwise. They travel to Charlottetown for supplies and return halfway through the meeting, each carrying a potato lightbulb – something Miss Stacy taught them to make in class. The parents are impressed and listen to the students talk about everything Miss Stacy has done for them. Miss Stacy herself walks in and offers her own opinion in a level, reasonable manner. The adults elect to keep Miss Stacy, and the students rejoice, excited to keep learning.

Ruby Loves Being a Woman

When Anne gets her first period, she laments that she’s not ready to be a woman. The girls discuss it at school the next day, calling menstruation shameful – but when curious Anne asks why they have no answer. “We can make a whole person,” she says with awe.

When a few boys lift their skirts, Anne yells, “A skirt is not an invitation!” while the others brush it off as a joke. In season 3 Gilbert proudly reads from Anne’s opinion article, “Women matter on their own, not in relation to a man.” Men repeatedly call the women of Avonlea “hysterical” and tell them their thoughts don’t matter. Diana, Anne’s best friend, lives with parents who insist that she’s “obliged to marry well” and that this is her one task in life.

At the ripe age of thirteen, Anne proclaims “I love being a woman,” not long before rebuking Billy, who says men do “real work” while girls bake cookies. Ruby’s house has been damaged in a fire, so she stays at Anne’s home while the men repair it. Ruby has a notorious crush on Gilbert, so Anne suggests they bake biscuits for the boys. Billy mocks them while Anne tells him she could do the work while he’s too busy being a bully to do it himself.

At first, Ruby resists being associated with Anne, but when Anne introduces her friends to Beltane rituals, they feel empowered. Ruby kneels on the ground, crying. “How I love being a woman,” she says emphatically, smiling.

The Barry family is firmly against girls receiving an education. Diana’s mother is preparing her for Finishing School, where she will learn to perform household duties and how to be a wife. Diana is confused. Aunt Josephine tries to talk to her, but she gets defensive. Yet when she leaves school while Anne and the others remain to study for their Queen’s Academy entrance exams, she seems longing and regretful.

At the last minute, Diana decides to sit the exam, but she can’t tell her parents about it. Aunt Josephine is secretly pleased but doesn’t let anything on. Diana ends up passing and is accepted to Queen’s with her friends – but her parents are sorely disappointed. Mr Barry yells at her and blames her for upsetting her mother, who is in tears on the sofa. Eventually, Diana’s parents relent, and she joins Anne at Queen’s Academy. Unfortunately, the series was cancelled before the Barrys’ reasoning behind this could be explored, and before viewers could see Anne and her friends embracing their futures.

Prissy Runs Away From the Wedding

From Anne’s first day at Avonlea School, Mr Phillips is portrayed as a biased, ornery man who is extremely unprofessional in his work. He shares a scandalous filtration with Priscilla (Prissy) Andrews, the sister of Billy and Anne’s friend Jane. In season 2, Mr Phillips asks Mr Andrews for permission to propose to Prissy, and she accepts. Everyone at school whispers about the unconventional relationship while Mr Phillips continues being rude and discriminating against students – like Anne and Cole – in class.

Prissy begins to have doubts about Mr Phillips. Her mother is one of the head members of the Progressive Mothers Group, and she expresses her concern over the arrangement, especially Prissy’s willingness to give up a college education. Prissy asserts that this is what she wants, but as the girls help her get dressed on her wedding day, Anne tells her that she hopes their marriage will one day become one in which they respect and like one another. Anne means it in earnest, but Prissy becomes sombre. At the altar, she glances around at her mother and her friends, drops her bouquet, and runs out of the church. Mrs Andrews smiles quietly to herself, and the girls run after her.

Prissy trips over in the snow and the girls think she’s crying. But when she lifts her head, she laughs. The girls dance around in their colourful dresses, playing with the snow, revelling in their youth and freedom.

Anne often complains about her red hair, slim figure, and freckles because her appearance is considered “homely” and unappealing in the setting she’s living in. This is an important theme to bring up, especially in a series set in an environment where women are valued for their ability to be a good wife, and one of their greatest assets is supposed to be their appearance.

Anne continually compares herself to her friends, especially Diana, who she considers to be “divinely beautiful”. But when Mrs Lynde calls her ugly, Anne flies into a rage, telling her that she hates her. Marilla wonders why Anne is so infuriated by a comment that Anne makes often enough to herself. Instead of comforting Anne about her appearance, she only calls her vain. Anne seems to learn her lesson when she accidentally dyes her hair green, and Marilla cuts it all off.

But only at the end of season 3 does Anne like her appearance. After Diana joins her at Queen’s and she and Gilbert confess their love for one another, Matthew and Marilla arrive with a gift. Season 3 follows Anne’s search for her biological lineage. The Cuthberts, while worried at first that they would lose Anne, eventually decide to help her. They find a book that belonged to Anne’s parents. In it, Anne learns that her mother was a teacher and had red hair, like her. That night, Anne is penning a letter to Gilbert: “Dear Gilbert, I look like my mother …” She pauses and looks at her reflection in the mirror and smiles. This is a very fitting last shot for the season, which now also serves as a series finale.